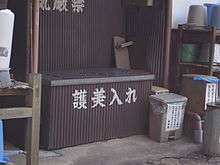 In modern Japanese, ateji (当て字, 宛字 or あてじ, "called upon characters") principally refer to kanji used to phonetically represent native or borrowed words with less regard to the underlying meaning of the characters. This is similar to man'yōgana in Old Japanese. Conversely ateji also refers to kanji used semantically without regard to the readings.

For example, the word sushi is often written with the ateji 寿司. Though the two characters have the readings su and shi respectively, the character 寿 means "one's natural life span" and 司 means "to administer", neither of which has anything to do with the food. Ateji as a means of representing loanwords has been largely superseded in modern Japanese by the use of katakana (see also Transcription into Japanese), although many ateji coined in earlier eras still linger on.

Ateji today are used conventionally for certain words, such as 寿司 (sushi), though these words may be written in hiragana (especially for native words), or katakana (especially for borrowed words), with preference depending on the particular word, context, and choice of the writer. Ateji are particularly common on traditional store signs and menus. For example, kōhī, the Japanese loanword for "coffee", is generally written using the katakana コーヒー, but on coffee shop signs and menus, it is often written with the ateji 珈琲.

Many characters have gained meanings derived from ateji usage. For example, ateji was once widely utilized for foreign place names; such as in the ateji ajia (亜細亜) used to write "Asia". The original ateji word is now considered archaic, but the character 亜 has gained the meaning "Asia" in such compounds as tōa (東亜, East Asia), even though 亜 originally meant "subsequent" (and continues to). From the ateji amerika (亜米利加, America), the second character was taken, resulting in the semi-formal coinage beikoku (米国), which literally translates to "rice country" but means "United States of America".

When using ateji to represent loanwords, the kanji are sometimes chosen for both their semantic and phonetic values, a form of phono-semantic matching. A stock example is 倶楽部 (kurabu) for "club", where the characters can be interpreted loosely in sequence as "together", "fun" and "place". Another example is 合羽 (kappa) for the Portuguese capa, a kind of raincoat. The characters can mean "wings coming together", as the pointed capa resembles a bird with wings folded together.

The ad hoc usage of Chinese characters for their phonetic values dates nearly to the introduction of Chinese characters to Japan. Two widespread uses of ateji came out of this. On one front, scholars and monks used kanji characters as translation aids between the lines of Chinese texts. On the other, poets simply used kanji phonetically to write in Japanese. Many different characters were used with the same sound values. This system of characters is called 万葉仮名 man'yōgana (alphabet of myriad leaves). The kana of modern Japanese (hiragana and katakana) developed as organic simplifications of man'yōgana that were eventually codified.

Ateji are primarily used today for historical terms – in historical order, these are primarily Sanskrit terms dating from the introduction of Buddhism to Japan, Portuguese terms from the 16th and 17th centuries, and Dutch terms from the 17th, 18th, and 19th centuries – see Japanese words of Portuguese origin and Japanese words of Dutch origin. Ateji found some use in the Meiji era and in the 20th century, but has largely been superseded by katakana.

In Buddhist Japanese, Sanskrit terms used in some chants also derive from ateji but were not called such. These Buddhist texts were translated into Chinese (in a Literary Chinese style) in China long ago. The translation rule for mantras were not to translate the mantra, but instead to represent it phonetically with Chinese characters. For the sutras, they were translated into Chinese Literary Language (Wenyan). The terms prajñāpāramitā (般若波羅蜜多, hannya-haramita) and samyaksaṃ-bodhi (三藐三菩提, sanmyakusanbodai), or "Perfection of Wisdom" and "Fully Enlightened", both appear in the Heart Sutra, but are written using ateji.

訓読み kun-yomi (Japanese-origin reading) should not be confused with ateji. Whereas ateji are characters used to represent Japanese/borrowed words without regard to the meaning of those characters; kun'yomi are readings, typically words, of Japanese origin that have been officially applied to the borrowed Chinese characters. (This can be related to Latin-Germanic origin synonyms in English.)

When a native Japanese word is written as a compound by meaning only, and this spelling is established in the language, as in otona (大人, adult), the word is the semantic variety of ateji, and is known specifically as 熟字訓 (jukujikun 'established meaning-spellings').

Intentional improvised use of irregular kanji spellings (as opposed to spelling mistakes) is known as 義訓 gikun, and generally requires furigana (notational reading characters) to be read properly. Many jukujikun (established meaning-spellings) may have started out as gikun (improvised meaning-spellings). A loanword example is reading 宿敵 shukuteki 'mortal enemy' as the English-derived word raibaru 'rival'.

While standardized ateji uses okurigana, as in 可愛い (kawai-i) having the 〜い so that it can inflect as 可愛かった (kawai-katta) for the past tense, gikun that is only intended for one-off usage need not have sufficient okurigana. For example, 辛い kara-i, "spicy, salty" is an adjective and requires an 〜い, but it might be spelt for example as 花雷 ka-rai (both legitimate on readings of the characters) on a poster, for example, where there is no intention of inflecting this spelling.

Most ateji are multi-character, but in rare cases they can be single-character, as in 缶 kan (simplification of 罐, for which kan is the Chinese pronunciation), used for "can, metal tin" (罐 originally means "metal pot, iron teakettle", so this is similar). This is classified as ateji.

In some rare cases, an individual kanji has a loan word reading – that is, a character is given a new reading by borrowing a foreign word – though most often these words are written in katakana. The three most notable examples are pēji (頁、ページ, page), zero (零、ゼロ, zero), and dāsu (打、ダース, dozen). botan (釦／鈕、ボタン, from Portuguese botão (which means button)) and mētoru (米、メートル, meter) are marginally understood or used in some settings, but most are obscure – see list of single character loan words for more.

These are classed as kun'yomi of a single character, because the character is being used for meaning only (without the Chinese pronunciation), rather than as ateji, which is the classification used when a loanword term is using existing sounds only (as in 天麩羅 'tempura'), or alternatively as a compound with meaning only (as in 煙草 – the sound タバコ cannot be broken down into readings of individual characters). In principle these could be considered as 1-character meaning-only ateji, but because the reading corresponds to a single character, these are considered readings instead. Note that while kun'yomi are generally written as hiragana when writing out the word in kana instead of kanji (because native Japanese), these gairaigo "kun'yomi" are generally written as katakana (because a foreign borrowing). See single character gairaigo for further discussion.

Note that numerically, most of these characters are for units, particularly SI units, in many cases using new characters (kokuji) coined during the Meiji period, such as kiromētoru (粁、キロメートル, kilometer, 米 "meter" + 千 "thousand"; this character is obscure and not in common use).

Some non-kanji symbols or Latin character abbreviations also have loanword readings, often quite long; a common example is '%' (the percent sign), which has the five kana reading パーセント, while the word "centimeter" is generally written as "cm" (with two half-width characters, so occupying one space) and has the seven kana reading センチメートル (it can also be written as 糎, as with kilometer above, though this is very rare). Many borrowed measurement terms may be written as tiny abbreviations stuffed into a single character space called 環境依存文字 'space conserving characters': ㌢ senchi 'cm', ㌔ kiro 'kilo', etc.

In a few cases, the etymology of a word is unclear, and hence whether the term is a borrowing or not cannot be determined. One such example is bira (片、枚、ビラ, bill, flyer, leaflet), which may be from native Japanese hira (片、枚) or びらびら (bira-bira), or may be from English "bill"; it is currently frequently written in katakana, however.

There are occasional spellings which derive from Kanbun (Japanese form of literary Chinese), where the kanji form follows literary Chinese, but the pronunciation follows Japanese. An example of this is writing 不〜 ("no, not") before a kanji for a verb, corresponding to the verb inflection 〜ず – for example, writing 不知 for 知らず shi-razu "not knowing". The word 不知 is read as shirazu (as if it were a native Japanese verb), though in this case 不知 is also a Sino-Japanese word (a noun), read as fuchi, meaning "ignorance". These are primarily found in older literature, but are occasionally used in variant spellings of everyday words, such as 親不知 oya-shirazu "wisdom tooth".