The Olympic Athletic Center of Athens has hosted the Mediterranean Games in 1991, the World Championship in Athletics in 1997 as well as other important athletic and cultural events. The most significant event the Athens Olympic Sports Complex has hosted, was the Olympic Games. OACA was the main venue for the Athens Olympic Games in 2004. The complex was revamped for the games under a design produced by the Spanish architect Santiago Calatrava.

It is currently used as the home ground of AEK Athens FC , one of the biggest football clubs in Greece. 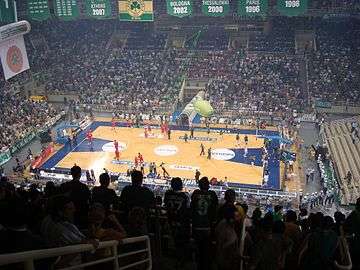 The Nikos Galis Olympic Indoor Hall (also known simply as the Indoor Hall) was completed in 1995, and was the largest indoor venue in use for sporting events at the 2004 Summer Olympics in Athens, Greece. It is part of the Athens Olympic Sports Complex, in the suburb of Maroussi. The arena was used for artistic gymnastics and trampolining and also hosted the finals of the basketball matches at the games. On May 18 and 20, 2006, the Olympic Indoor Hall hosted the 51st Eurovision Song Contest, that was held in Athens after Greece's victory at the Song Contest in 2005.

Transportation to and from the venue

The table below illustrates how the Athens Olympic Sports Complex facilities are used today: