The Nikos Galis Olympic Indoor Hall (previously known as O.A.C.A. Olympic Indoor Hall), which is a part of the Olympic Athletic Center of Athens (O.A.C.A.) "Spiros Louis" (Greek: O.A.K.A.), was completed in 1995, and was the largest indoor venue in use for sporting events at the 2004 Summer Olympics in Athens, Greece. It is located in the Athens suburb of Marousi. It is considered to be one of the biggest and most modern indoor sports arenas in all of Europe.

The arena also contains a training facility. Since 2016, it is named after the well-known Greek basketball player Nikos Galis.[6]

Nikos Galis Olympic Indoor Hall is notable for its distinctive A-frame roof that features four huge pillars, each of which is 35 meters tall, that stand 108 meters apart from each other. According to the Greek Ministry of Sports, it is the largest indoor sporting arena of its kind in the world. The arena is also constructed in a unique way so that an abundant amount of natural light comes into the arena during the day.[7]

The arena was used for artistic gymnastics and trampolining, and also hosted the finals of the basketball matches at the 2004 Summer Olympics.[11] Renovation of the building for the Olympics was completed on June 30, 2004, and it was officially reopened on August 10, 2004, shortly before the beginning of the games.

The Indoor Hall is the regular home court for the Greek Basket League professional basketball clubs Panathinaikos Athens and AEK Athens. It has also been used as the home court for Maroussi Athens, for European-wide league matches

The arena was used to host the quarterfinals, semifinals, and finals stages of the 1998 FIBA World Championship. It is also the primary home court of the Greek National Basketball Team.

On May 4 and 6, 2007, the Indoor Hall hosted the EuroLeague 2006–07 season's Final Four, the semifinals and finals rounds of Europe's principal pro club competition in basketball, which saw hometown favorite Panathinaikos win the title. 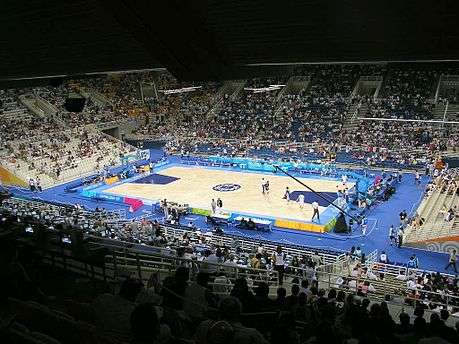 Inside view of the arena's main hall and basketball court. 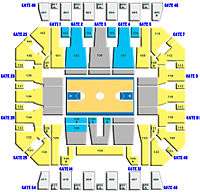 On May 18 and 20, 2006, the Hall hosted the 51st Eurovision Song Contest, that was held in Athens, after Greece's victory at the Song Contest in 2005. There were 15,000 seats available for spectators, both for the semifinal and the grand final. Some of the entertainers who have performed at the arena include: Depeche Mode, Jennifer Lopez, Björk, Beyoncé, Roger Waters, Aloha from Hell, Tokio Hotel, Helena Paparizou, Sakis Rouvas, and Anna Vissi.