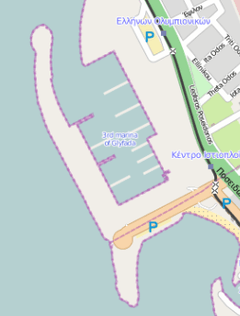 The Agios Kosmas Olympic Sailing Centre hosted the sailing events at the 2004 Summer Olympics in Athens, Greece.[1] The center is located about four miles from downtown Athens along the coast. It was officially opened on August 2, 2004, a few weeks before the Olympics, though test events were conducted at the site in August 2002 and 2003. The center had a capacity of 1,600 for the medal ceremonies.

After the Olympics, the site was turned over to the private sector (Seirios AE), and will become a marina with a 1,000+ yacht capacity,[2] as part of Athens' revitalized waterfront.[3]