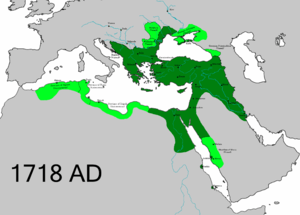 The Ottoman Empire in 1718, following the Treaty Of Passarowitz.

The Austro–Turkish War was fought between Austria and the Ottoman Empire. The Treaty of Karlowitz (1699) was not an acceptable long-standing agreement for the Ottoman Empire. Twelve years after Karlowitz, the Turks began the long prospect of taking revenge for their defeat at the Battle of Vienna in 1683. First, the Turkish Grand Vizier Baltacı Mehmet's army defeated Peter the Great's Russian Army in the Russo–Turkish War (1710–1711). Thereafter, in the Turkish–Venetian War (1714–1718), the new Grand Vizier Damat Ali re-conquered Morea from the Venetians in 1715. As a reaction, Austria, as the guarantor of the Treaty of Karlowitz, threatened the Ottoman Empire, but in response the Ottoman Empire declared war against Austria.

In 1716, Prince Eugene of Savoy defeated the Turks at Petrovaradin. The Banat and its capital Timişoara was conquered in October 1716. The following year, after the Austrians captured Belgrade, the Turks wanted peace and in 1718 the Treaty of Passarowitz was signed. The Austrians maintained control over Belgrade and the Treaty of Passarowitz confirmed their gains in 1699, leaving the Turks with control over the south bank of the Danube river. The War led to the loss of Austrian holdings in Italy because of their support in the Balkans. It caused them to send more supplies to the Balkan front ultimately reducing focus to their Italian territories which were facing aggression from Spain. Even though Eugene of Savoy asked for the troops to be diverted, focus was given to the Ottomans. This ultimately caused The War of the Quadruple Alliance against Spain.