In library science, authority control is a process that organizes bibliographic information, for example in library catalogs[1][2][3] by using a single, distinct spelling of a name (heading) or a numeric identifier for each topic. The word authority in authority control derives from the idea that the names of people, places, things, and concepts are authorized, i.e., they are established in one particular form.[4][5][6] These one-of-a-kind headings or identifiers are applied consistently throughout catalogs which make use of the respective authority file,[7] and are applied for other methods of organizing data such as linkages and cross references.[7][8] Each controlled entry is described in an authority record in terms of its scope and usage, and this organization helps the library staff maintain the catalog and make it user-friendly for researchers.[9]

Cataloguers assign each subject—such as an author, book, series or corporation—a particular unique identifier or heading term which is then used consistently, uniquely, and unambiguously for all references to that same subject, even if there are variations such as different spellings, pen names, or aliases.[10] The unique header can guide users to all relevant information including related or collocated subjects.[10] Authority records can be combined into a database and called an authority file, and maintaining and updating these files as well as "logical linkages"[11] to other files within them is the work of librarians and other information cataloguers. Accordingly, authority control is an example of controlled vocabulary and of bibliographic control.

While in theory any piece of information is amenable to authority control such as personal and corporate names, uniform titles, series names, and subjects,[2][3] library cataloguers typically focus on author names and book titles. Subject headings from the Library of Congress fulfill a function similar to authority records, although they are usually considered separately. As time passes, information changes, prompting needs for reorganization. According to one view, authority control is not about creating a perfect seamless system but rather it is an ongoing effort to keep up with these changes and try to bring "structure and order" to the task of helping users find information.[9] 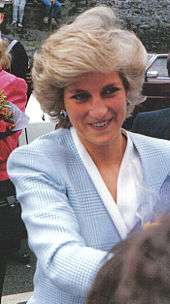 Princess Diana is described in one authority file as "Windsor, Diana, Princess of Wales" which is an official heading.

Sometimes within a catalog there are different names or spellings for only one person or subject.[10][13] This can bring confusion since researchers may miss some information. Authority control is used by cataloguers to collocate materials that logically belong together but which present themselves differently. Records are used to establish uniform titles which collocate all versions of a given work under one unique heading even when such versions are issued under different titles. With authority control, one unique preferred name represents all variations and will include different variations, spellings and misspellings, uppercase versus lowercase variants, differing dates, and so forth. For example, in Wikipedia, the subject of Princess Diana is described by an article Diana, Princess of Wales as well as numerous other descriptors, but both Princess Diana and Diana, Princess of Wales describe the same person; an authority record would choose one title as the preferred one for consistency. In an online library catalog, various entries might look like the following:[2][3]

Generally there are different authority file headings and identifiers used by different libraries in different countries, possibly inviting confusion, but there are different approaches internationally to try to lessen the confusion. One international effort to prevent such confusion is the Virtual International Authority File which is a collaborative attempt to provide a single heading for a particular subject. It is a way to standardize information from different authority files around the world such as the Integrated Authority File (GND) maintained and used cooperatively by many libraries in German-speaking countries and the United States Library of Congress. The idea is to create a single worldwide virtual authority file. For example, the ID for Princess Diana in the GND is 118525123 (preferred name: Diana <Wales, Prinzessin>) while the United States Library of Congress uses the term Diana, Princess of Wales, 1961-1997; other authority files have other choices. The Virtual International Authority File choice for all of these variations is VIAF ID: 107032638 — that is, a common number representing all of these variations.[18]

The English Wikipedia prefers the term "Diana, Princess of Wales", but at the bottom of page about her, there are links to various international cataloguing efforts for reference purposes.

Sometimes two different authors have been published under the same name.[10] This can happen if there is a title which is identical to another title or to a collective uniform title.[10] This, too, can cause confusion. Different authors can be distinguished correctly from each other by, for example, adding a middle initial to one of the names; in addition, other information can be added to one entry to clarify the subject, such as birth year, death year, range of active years such as 1918–1965 when the person flourished, or a brief descriptive epithet. When cataloguers come across different subjects with similar or identical headings, they can disambiguate them using authority control.

A customary way of enforcing authority control in a bibliographic catalog is to set up a separate index of authority records, which relates to and governs the headings used in the main catalog. This separate index is often referred to as an "authority file." It contains an indexable record of all decisions made by cataloguers in a given library (or—as is increasingly the case—cataloguing consortium), which cataloguers consult when making, or revising, decisions about headings. As a result, the records contain documentation about sources used to establish a particular preferred heading, and may contain information discovered while researching the heading which may be useful.[17]

Since the headings function as access points, making sure that they are distinct and not in conflict with existing entries is important. For example, the English novelist William Collins (1824–89), whose works include the Moonstone and The Woman in White is better known as Wilkie Collins. Cataloguers have to decide which name the public would most likely look under, and whether to use a see also reference to link alternative forms of an individual's name.
— Moya K. Mason.[20][21] 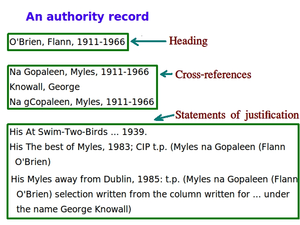 For example, the Irish writer Brian O'Nolan, who lived from 1911 to 1966, wrote under many pen names such as Flann O'Brien and Myles na Gopaleen. Catalogers at the United States Library of Congress chose one form—"O'Brien, Flann, 1911-1966"—as the official heading.[22] The example contains all three elements of a valid authority record: the first heading O'Brien, Flann, 1911-1966 is the form of the name that the Library of Congress chose as authoritative. In theory, every record in the catalog that represents a work by this author should have this form of the name as its author heading. What follows immediately below the heading beginning with Na Gopaleen, Myles, 1911-1966 are the see references. These forms of the author's name will appear in the catalog, but only as transcriptions and not as headings. If a user queries the catalog under one of these variant forms of the author's name, he or she would receive the response: "See O'Brien, Flann, 1911-1966." There is an additional spelling variant of the Gopaleen name: "Na gCopaleen, Myles, 1911-1966" has an extra C inserted because the author also employed the non-anglicized Irish spelling of his pen-name, in which the capitalized C shows the correct root word while the preceding g indicates its pronunciation in context. So if a library user comes across this spelling variant, he or she will be led to the same author regardless. See also references, which point from one authorized heading to another authorized heading, are exceedingly rare for personal name authority records, although they often appear in name authority records for corporate bodies. The final four entries in this record beginning with His At Swim-Two-Birds ... 1939. constitute the justification for this particular form of the name: it appeared in this form on the 1939 edition of the author's novel At Swim-Two-Birds, whereas the author's other noms de plume appeared on later publications. 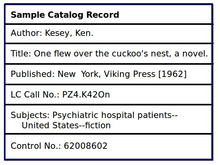 Card catalog records such as this one used to be physical cards contained in long rectangular drawers in a library; today, generally, this information is stored in online databases.[23]

Authority control with "Kesey, Ken" as the chosen heading.[23]

The act of choosing a single authorized heading to represent all forms of a name is quite often a difficult and complex task, considering that any given individual may have legally changed their name or used a variety of legal names in the course of their lifetime, as well as a variety of nicknames, pen names, stage names or other alternative names. It may be particularly difficult to choose a single authorized heading for individuals whose various names have controversial political or social connotations, when the choice of authorized heading may be seen as endorsement of the associated political or social ideology.

An alternative to using authorized headings is the idea of access control, where various forms of a name are related without the endorsement of one particular form.[24]

Before the advent of digital online public access catalogs and the Internet, creating and maintaining a library's authority files were generally carried out by individual cataloging departments within each library. Naturally, then, there was considerable difference in the authority files of the different libraries. For the early part of library history, it was generally accepted that, as long as a library's catalog was internally consistent, the differences between catalogs in different libraries did not matter greatly.

As libraries became more attuned to the needs of researchers and began interacting more with other libraries, the value of standard cataloging practices came to be recognized. With the advent of automated database technologies, catalogers began to establish cooperative consortia, such as OCLC and RLIN in the United States, in which cataloging departments from libraries all over the world contributed their records to, and took their records from, a shared database. This development prompted the need for national standards for authority work.

In the United States, the primary organization for maintaining cataloging standards with respect to authority work operates under the aegis of the Library of Congress, and is known as the Name Authority Cooperative Program, or NACO Authority.[25]