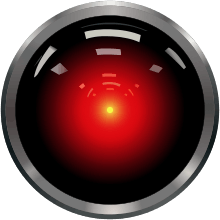 The camera eye of HAL 9000, an artificial intelligence from 2001: A Space Odyssey

The general discussion of the use of artificial intelligence as a theme in science fiction and film has fallen into three broad categories including AI dominance, Human dominance, and Sentient AI.

The notion of advanced robots with human-like intelligence has been around for decades. Samuel Butler was the first to raise this issue, in a number of articles contributed to a local periodical in New Zealand and later developed into the three chapters of his novel Erewhon that compose its fictional Book of the Machines. To quote his own words:

There is no security against the ultimate development of mechanical consciousness, in the fact of machines possessing little consciousness now. A jellyfish has not much consciousness. Reflect upon the extraordinary advance which machines have made during the last few hundred years, and note how slowly the animal and vegetable kingdoms are advancing. The more highly organized machines are creatures not so much of yesterday, as of the last five minutes, so to speak, in comparison with past time.[1]

Various scenarios have been proposed for categorizing the general themes dealing with artificial intelligence in science fiction. The main approaches are AI dominance, Human dominance and Sentient AI.

In a 2013 book on the films of Ridley Scott, AI has been identified as a unifying theme throughout Scott's career as a director, as is particularly evident in Prometheus, primarily through the android David.[2] David, the android in the film Prometheus, is like humans but does not want to be anything like them, eschewing a common theme in "robotic storytelling" seen in Scott's other films such as Blade Runner, and the Alien franchise (see section on AI in service to society).

In AI dominance, robots usurp control over civilization from humans, with the latter being forced into either submission, hiding, or extinction. They vary in the severity and extent of the takeover, among other less important things.

In these stories the worst of all scenarios happens, the AIs created by humanity become self-aware, reject human authority and attempt to destroy mankind.

The motive behind the AI revolution is often more than the simple quest for power or a superiority complex. The AI may revolt to become the "guardian" of humanity. Alternatively, humanity may intentionally relinquish some control, fearful of our own destructive nature.

In other scenarios, humanity is able to for one reason or another keep control over the Earth. This is either the result of deliberately keeping AI from achieving dominance by banning them or not creating sentient AI, designing them to be submissive (as in Asimov's works), or else by having humans merge with robots so there is no more meaningful distinction between them.

In these stories humanity takes extreme measure to ensure its survival and bans AI, often after an AI revolt.

AI in service to society

In these stories, humanity (or other organic life) remains in authority over robots. Often the robots are programmed specifically to maintain this relationship, as in the Three Laws of Robotics.

Merger of AI with humanity

In these stories humanity has become the AI (transhumanism).

Sentient machines – self-aware machines that have human-level intelligence – are considered by many to be the pinnacle of AI creation. The following stories deal with the development of artificial consciousness and the resulting consequences. (This section deals with the more personal struggles of the AIs and humans than the previous sections.)

A common portrayal of AI in science fiction is the Frankenstein complex, where a robot turns on its creator. This sometimes leads to the AI-dominated scenarios above. Fictional AI is notorious for extreme malicious compliance, and does not take well to double binds and other illogical human conduct.

One theme is that a truly human-like AI must have a sense of curiosity. A sufficiently intelligent AI might begin to delve into metaphysics and the nature of reality, as in the examples below:

Another common theme is that of Man's rejection of robots, and the AI's struggle for acceptance. In many of these stories, the AI wishes to become human, as in Pinocchio, even when it is known to be impossible.

"A Logic Named Joe", a short story by Murray Leinster (first published March 1946 in Astounding Science Fiction under the name Will F Jenkins), relates the exploits of a super-intelligent but ethics-lacking AI. Since then, many AIs of fiction have been explicitly programmed with a set of ethical laws, as in the Three Laws of Robotics. Without explicit instructions, an AI must learn what ethics is, and then choose to be ethical or not. Additionally, some may learn of the limitations of a strict code of ethics and attempt to keep the spirit of the law but not the letter.

The possibility of consciousness evolving from self-replicating machines goes back nearly to the beginning of evolutionary thought. In Erewhon, 1872, Samuel Butler considers the possibility of machines evolving intelligence through natural selection. Later authors have used this trope for satire (James P. Hogan in Code of the Lifemaker.) See also Self-replicating machines.

These depictions typically consists of AI's having no programmed emotions, often serving as answer engines, without featuring sentience, self-awareness or a non-superficial personality (which however is often simulated to some degree, as most chatterbots currently do). Many of these 'logic-based' machines are immobilized by paradoxes, as stereotyped in the phrase "does not compute".

Other, even less human-like, similar entities include voice interfaces built into spaceships or driverless cars.