Wikidata is a collaboratively edited knowledge base operated by the Wikimedia Foundation. It is intended to provide a common source of data which can be used by Wikimedia projects such as Wikipedia,[2][3] and by anyone else, under a public domain licence. This is similar to the way Wikimedia Commons provides storage for media files and access to those files for all Wikimedia projects, and which are also freely available for reuse. Wikidata is powered by the software Wikibase.[4]

Three statements from Wikidata's item on the planet Mars. Values include links to other items and to Wikimedia Commons.

A layout of the four main components of a phase-1 Wikidata page: the label, description, aliases and interlanguage links. 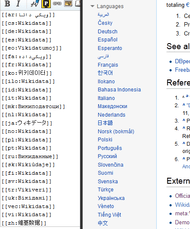 A Wikipedia article's list of interlanguage links as they appeared in an edit box (left) and on the article's page (right) prior to Wikidata. Each link in these lists is to an article that requires its own list of interlanguage links to the other articles; this is the information centralized by Wikidata.
Click here to visit the Wikidata entry for the article featured.

The "Edit links" link takes the reader to Wikidata to edit interlanguage links.

Wikidata is a document-oriented database, focused on items. Each item represents a topic (or an administrative page used to maintain Wikipedia) and is identified by a unique number, prefixed with the letter Q—for example, the item for the topic Politics is Q7163. This enables the basic information required to identify the topic the item covers to be translated without favouring any language.

Information is added to items by creating statements. Statements take the form of key-value pairs, with each statement consisting of a property (the key) and a value linked to the property. 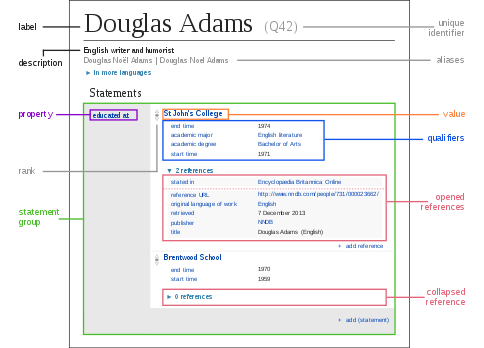 This diagram shows the most important terms used in Wikidata

The creation of the project was funded by donations from the Allen Institute for Artificial Intelligence, the Gordon and Betty Moore Foundation, and Google, Inc., totaling €1.3 million.[5][6] Initial development of the project is being overseen by Wikimedia Deutschland and has been split into three phases:[7]

Wikidata was launched on 30 October 2012 and was the first new project of the Wikimedia Foundation since 2006.[2][8][9] At this time, only the first phase was available. This enabled items to be created and filled with basic information: a label – a name or title, aliases – alternative terms for the label, a description, and links to articles about the topic in all the various language editions of Wikipedia.

The first aspects of the second phase were deployed on 4 February 2013, introducing statements to Wikidata entries. The values were initially limited to two data types (items and images on Wikimedia Commons), with more data types (such as coordinates and dates) to follow later. The first new type, string, was deployed on 6 March.[17]

The ability of the various language editions of Wikipedia to access data added to Wikidata as part of phase two was rolled out progressively between 27 March and 25 April 2013.[18][19]

On 16 September 2015, Wikidata began allowing so-called arbitrary access, or access to properties of Wikidata items which were not directly connected to it. For example, in the past the article about Berlin you could not access data about Germany, but with arbitrary access it could.[20] On 27 April 2016 arbitrary access was activated on Wikimedia Commons.[21]

Phase 3 will involve database querying and the creation of lists based on data stored on Wikidata.[7] As of October 2016 two tools for querying Wikidata (Wikidata:List of queries) were available: AutoList and PetScan, additionally to a public SPARQL endpoint .

There is concern that the project is being influenced by lobbying companies, PR professionals and search engine optimizers.[22]

According to Wikimedia statistics, half of the information in Wikidata is unsourced.[22] Another 30% is labeled as having come from Wikipedia, but with no indication as to which article.[22]

The bars on the logo contain the "WIKI" word encoded in Morse code.[23]