Azraq (Arabic: الأزرق‎‎ meaning "the blue one") is a small town in the province of Zarqa Governorate in central-eastern Jordan, 100 km east of Amman. The population of Azraq was 9021 persons in 2004.[1] The Shaheed Mwaffaq Air Base is located in Azraq. 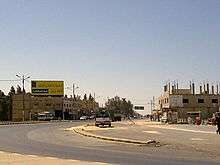 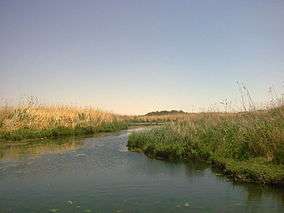 The wetlands of Azraq

Azraq has long been an important settlement in a remote and now-arid desert area of Jordan. The strategic value of the town and its castle (Qasr Azraq) is that it lies in the middle of the Azraq oasis, the only permanent source of fresh water in approximately 12,000 square kilometres of desert.

The town is located on a major desert route that would have facilitated trade within the region. The Azraq oasis has a long history beginning in the Lower Palaeolithic period. Many Palaeolithic sites have been documented in the Azraq Wetlands Reserve. During the Epipalaeolithic period the oasis was also an important focus of settlement. Nabatean period settlement activity has also been documented in the area. Qasr Azraq was built by the Romans in the 3rd century A.D., and was heavily modified in the Middle Ages by the Mameluks. In the Umayyad period a water reservoir was constructed in southern Azraq. During the Arab Revolt in the early 20th century, Qasr Azraq was an important headquarters for T. E. Lawrence.

The area near the Azraq Oasis is set with hundreds of geoglyphs, large wheel-shaped structures made of stone that date back at least 2,000 years. These structures are often found on lava fields and range from 82 feet to 230 feet (25 meters to 70 meters) across. Archaeologists used to believe that the Azraq Oasis wheels were used as a cemetery, although that is now in doubt.[2]

The Azraq refugee camp, sheltering refugees of the Syrian Civil War, was opened in 2014 and is located 20 kilometres (12 mi) west of Azraq.[3] The site had been previously used during the Gulf War of 1990–91 as a transit camp for displaced Iraqis and Kuwaitis.[4] 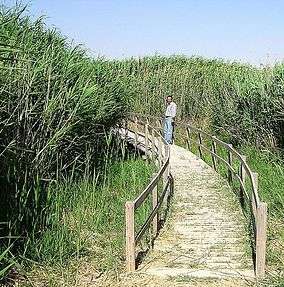 The Shaumari Wildlife Reserve in Azraq

Azraq is also notable as being the site of one of Jordan's seven protected nature reserve areas (set up by the Royal Society for the Conservation of Nature): the Azraq Wetlands Reserve in Azraq al-Janoubi (South Azraq).

The separate and larger Shaumari reserve is also close to Azraq, being only 10 km south of the town.

This article is issued from Wikipedia - version of the 3/12/2016. The text is available under the Creative Commons Attribution/Share Alike but additional terms may apply for the media files.