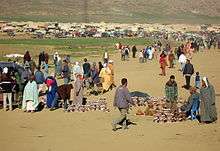 The city of Azrou is located at a strategic crossroads between the Middle Atlas and the High Atlas between Meknes, Fez, Ifrane, Midelt and Khenifra. The N13 road connects Azrou to Meknes in the north and Timahdite in the south. The National Route N8 comes from Sidi Addi in the west and continues to Taounza and Ifrane in the north-east.

Azrou is at an altitude of 1250 m and surrounded by mountains covered with green oak and cedar.[1]

The Cèdre Gouraud Forest is located to the north, where one of the sub-populations of the Barbary macaque, Macaca sylvanus (called magots) is found.[2] In addition to its rich biodiversity symbolized by the famous cedar forest there are the butterflies which are unique in the world. The surroundings of Azrou are a centre of attraction for the residents, hikers, and picnickers of the large neighbouring towns. These surroundings are also home to the 'Cedre Gouraud' or 'Grand Cedar', a famous tourist attraction. This place is also famous due to the macaque apes that live in the area and are drawn by tourist activity. Moreover, the Azrou forest provides an excellent hiking and exercising environment and also holds a summer camp for children. Azrou urban construction is in the European style (red tile roofs).

The region is also known for its cherry trees, apple trees, fish farms, and the abandoned sanatorium in the surrounding metropolitan area of Bensmim.

Azrou is a geomorphological name taken from the landform of a large rock outcrop (Aẓro, ⴰⵥⵔⵓ, means "rock" or "stone" in the Berber language Tamazight) in the centre of the city.[1]

Azrou is mostly known for hosting the first high school in the Berber region: the Berber high school of Azrou (now the Tarik Ibn Ziad school). It was built by the French colonial authorities in order to train Moroccans for the colonial administration.[3] It was one of the instruments for the implementation of a Berber Dahir by which the King of Morocco left the Berbers to regulate their justice according to their customs without resorting to other jurisdictions (Colonial or "makhzen"). The college became an educational institution in the reference area, forming part of the political and military elites from 1956 to 1973, after independence, the college was renamed Azrou Tarik Ibn Ziad High School.

The city was long neglected by the Moroccan authorities since independence in 1956 to the detriment of the nearby town of Ifrane. Although it is the true capital of the Middle Atlas and a city that has given Morocco many leaders and intellectuals, the city still does not officially rank as provincial capital although it is in practice.

Today the city has been transformed into a tourist destination. The city has several hotels.