Meknes (French: Meknès; Arabic: مكناس Mknas‎‎; Berber: ⴰⵎⴽⵏⴰⵙ, Ameknas ; Spanish: Mequinez) is one of the four Imperial cities of Morocco, located in northern central Morocco and the sixth largest city by population in the kingdom. Founded in the 11th century by the Almoravids as a military settlement, Meknes became a capital under the reign of Sultan Moulay Ismaïl (1672–1727), the founder of the Alaouite dynasty. Sultan Moulay Ismaïl turned it into an impressive city in Spanish-Moorish style, surrounded by high walls with great doors, where the harmonious blending of the Islamic and European styles of the 17th century Maghreb are still evident today.[5] The urban population is estimated at more than 650,000[6] with the metropolitan population close to 1,000,000. It is the seat of Meknès Prefecture and an important economic pole in the region of Fès-Meknès.

Meknes is named after a Berber tribe which, was known as Miknasa (native Berber name: Imeknasen) in the medieval North African documents.

The Almoravids founded a fortress in Meknes during the 11th century. It resisted the Almohads rise, and was thus destroyed by them, only to be rebuilt in a larger size with mosques and large fortifications. Under the Merinids it received further madrasas, kasbahs and mosques in the early 14th century, and continued to thrive under the Wattasid dynasty. Meknes saw its golden age as the imperial capital of Moulay Ismail following his accession to the Sultanate of Morocco (1672–1727). He installed under the old city a large prison to house Christian sailors captured on the sea, and also constructed numerous edifices, gardens, monumental gates, mosques (whence the city's nickname of "City of a Hundred Minarets") and the large line of wall, having a length of 40 kilometres (25 miles).

According to the ICOMOS Heritage at Risk report of 2000, the historic city of Meknes contains insufficient drainage systems, and as a result suffers from inundation and leakage in certain areas.[7]

Meknes is located in a strategic position in the heart of Morocco, to its south and south-east are the rich cedar forests and mountains of the Middle Atlas mountains with the cities Ifrane and Azrou; and more to the south are the rich oases of Tafilalt. To the west are the two largest metropolitan areas of Morocco: Casablanca and Rabat. To the north is the mountainous north of Morocco with the cities of Tangier and Tétouan. East of Meknes includes a large number of cities of which Oujda and Fes.

Meknes has a Mediterranean climate with continental influences. Its climate is similar to some areas of southern Spain. The temperatures shifts from cool and cold in winter to hot days in the summer months of June–September. The nights, however, are always cool (or colder in winter), with daytime temperatures generally rising 10-14C above the low every day. The winter highs typically reach only 15.5 °C (59.9 °F) in December–January, whereas night temperatures average 3 °C (37 °F). (see weather-table below).

It rarely snows in Meknes.

Meknes is the seat of the prefecture of Meknès, which consists of 6 municipalities (including the city Meknes) and 15 rural communes.[10]

The following map depicts some of the monuments in the old Medina and a general view over the old and new parts of Meknes. 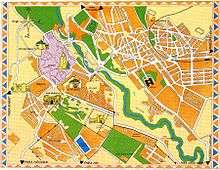 Monumental map of the city of Meknes 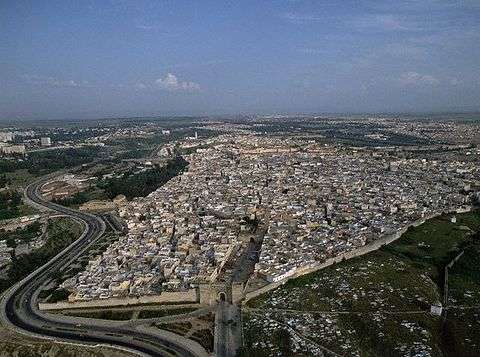 Aerial view of the west part of Meknes Médina

The ruins of the Roman town of Volubilis (Oualili) are about half an hour to the north.

Some of the historic mosques in Meknes include:

Néjjarine Mosque built in the 11th century by Almoravids, located in the old city(médina). Actually the mosque is closed due to some maintenance work.

The Grand Mosque built on a surface of more than 2,700 square meters, founded in the 11th century by the Almoravids. It has 11 gates and 143 arcades, a very old and historic library was established by the Marinids that actually still opens for readers. The Grand Mosque is situated in front of the Madrasa Bou Inania.

Panoramic view inside the Grand Mosque in May 2016 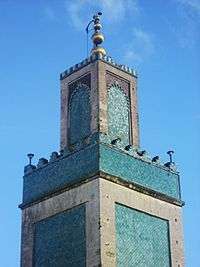 Minaret of the Grand Mosque.

Established by the Marinid sultan Abu al-Hasan and construction was completed by his son Abu Inan in 1345.[12]

Meknes is an economical center in Morocco with various products from the three economical sectors (agriculture, industry and services), which makes the city economically competitive and attractive for investments.

A December 2015 World Bank report classified Meknes as one of the three most competitive cities in Africa.[13] Two of those three competitive African cities are from Morocco: Meknes and Tangier.

Meknes is considered to be the capital of agriculture in Morocco. And the Saïss plain is one of the fertile and rich plains in Morocco and Meknes is the center of this plain. [14]

This image shows the geographical structure of the Saïss plain around Meknes area in Morocco.

Meknes city holds each year the International Agriculture Show in Morocco(French: Template:Salon International de l'Agriculture au Maroc) since April 2006. This agriculture show has an area of more than 250000 square meters, with more than 60 countries participating, and more than 1200 exhibitors.[15] The lands around Meknes area are known to be fertile and productive. The high elevation, fertility and the fresh water of those lands favor the cultivation of fruits and vegetables, most notably: peach, nectarine, prune, apples; potato, onion and garlic. Also, livestock raising, particularly sheep and cattle is widespread. Meknes has large industrial units for milk production and diary that fulfill the most of the needs of the region. Another agricultural product well known for its quality and taste in Morocco is the olive and olive oil from Meknes, and historically talking, Roman Volubilis was a major producer of olive oil.

Industry in Meknes is of light type, most of it is related to food processing especially in the Commune of Mejjat, and chemical and para-chemical industry in other industrial zones like the Agropolis industrial and agribusiness zone. Add to those the textile and metallic manufacturing which are old industries in the city. The year 2016 marks a new era of new industry in the city of Meknes, it includes electrical wire, embedded systems, and automotive parts production companies.

The first phase of the project has a land surface of 130 ha. The Agropolis Zone is 12 km from Meknes and 2.5 hours drive from Casablanca. Casablanca Port is 246 km far from Agropolis and Tanger-Med Port is 382 km away.

Most of the services products in Meknes are related to Tourism due to the history of the old city district -Meknes Médina-. Of Morocco's four Imperial Cities, Meknes is possibly the least well-known – not as large as Rabat, as fashionable as Marrakech, or as famous as Fez – and you might say that this is to its advantage as you’ll find this historic place quieter and more laid back than its sister cities. It's an enchanting place to visit, with winding narrow streets, a classic medina and grand buildings that hail back to its time as the capital of Morocco. Nearby are the Roman ruins of Volubis and the tomb of Moulay Idriss – two of the most important historical sites in the kingdom. But Meknes is also a modern, lively city with a vibrant nightlife, plenty of bars and a welcoming attitude towards visitors.[17]

The geographical location of the city of Meknes makes it one of the important transport hubs in Morocco. The city is accessed via the A2 expressway with two exits, one to the east of the city and another to the west.

Two train stations are located in the new city district(French: Ville Nouvelle) of Meknes, with trains each hour to the east, west, and north of Morocco. Operated by ONCF, the following table lists destinations reachable via Meknes railway stations(Round-trips):

As mentioned above, Meknes city has two train stations, and their names are: Meknes Railway Station(French: Gare de Meknès) and Meknes Amir Abdul Qadir Railway Station(French: Gare de Meknès Amir Abdelkader). All the mentioned trains cited in the previous table stop by the former station; and except the first row of the table, all the remaining trains stop by the latter station.

Meknes and its area are served by Saïss Airport (IATA: FEZ, ICAO: GMFF).

Public transport in Meknes is managed by the urban commune and it consists of:

Meknes is twinned with: