Balancing selection refers to a number of selective processes by which multiple alleles (different versions of a gene) are actively maintained in the gene pool of a population at frequencies longer than expected from genetic drift alone. This usually happens when the heterozygotes for the alleles under consideration have a higher adaptive value than the homozygote.[1] In this way genetic polymorphism is conserved.[2]

Evidence for balancing selection can be found in the number of alleles in a population which are maintained above mutation rate frequencies. All modern research has shown that this significant genetic variation is ubiquitous in panmictic populations. It is a genetic expression of the field experience of Darwin, Wallace and others, that natural populations in the wild are extraordinarily varied (though not all such variation is of genetic origin).

There are several mechanisms (which are not exclusive within any given population) by which balancing selection works to maintain polymorphism. The two major and most studied are heterozygote advantage and frequency-dependent selection.

In heterozygote advantage, or heterotic balancing selection, an individual who is heterozygous at a particular gene locus has a greater fitness than a homozygous individual. Polymorphisms maintained by this mechanism are balanced polymorphisms.[3]

A well-studied case is that of sickle cell anemia in humans, a hereditary disease that damages red blood cells. Sickle cell anemia is caused by the inheritance of an allele (HgbS) of the hemoglobin gene from both parents. In such individuals, the hemoglobin in red blood cells is extremely sensitive to oxygen deprivation, which results in shorter life expectancy. A person who inherits the sickle cell gene from one parent and a normal hemoglobin allele (HgbA) from the other, has a normal life expectancy. However, these heterozygote individuals, known as carriers of the sickle cell trait, may suffer problems from time to time.

Fitness varies in time and space

The fitness of a genotype may vary greatly between larval and adult stages, or between parts of a habitat range.[6]

The fitness of a genotype may depend on the fitness of other genotypes in the population: this covers many natural situations where the best thing to do (from the point of view of survival and reproduction) depends on what other members of the population are doing at the time.[7]

Species in their natural habitat are often far more complex than the typical textbook examples.

The grove snail, Cepaea nemoralis, is famous for the rich polymorphism of its shell. The system is controlled by a series of multiple alleles. Unbanded is the top dominant trait, and the forms of banding are controlled by modifier genes (see epistasis). 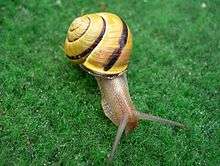 In England the snail is regularly preyed upon by the song thrush Turdus philomelos, which breaks them open on thrush anvils (large stones). Here fragments accumulate, permitting researchers to analyse the snails taken. The thrushes hunt by sight, and capture selectively those forms which match the habitat least well. Snail colonies are found in woodland, hedgerows and grassland, and the predation determines the proportion of phenotypes (morphs) found in each colony. 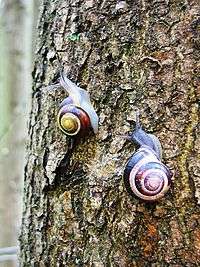 A second kind of selection also operates on the snail, whereby certain heterozygotes have a physiological advantage over the homozygotes. Thirdly, apostatic selection is likely, with the birds preferentially taking the most common morph. This is the 'search pattern' effect, where a predominantly visual predator persists in targeting the morph which gave a good result, even though other morphs are available.

The polymorphism survives in almost all habitats, though the proportions of morphs varies considerably. The alleles controlling the polymorphism form a supergene with linkage so close as to be nearly absolute. This control saves the population from a high proportion of undesirable recombinants.

In this species predation by birds appears to be the main (but not the only) selective force driving the polymorphism. The snails live on heterogeneous backgrounds, and thrush are adept at detecting poor matches. The inheritance of physiological and cryptic diversity is preserved also by heterozygous advantage in the supergene.[8][9][10][11][12] Recent work has included the effect of shell colour on thermoregulation,[13] and a wider selection of possible genetic influences is also considered.[14]

In the 1930s Theodosius Dobzhansky and his co-workers collected Drosophila pseudoobscura and D. persimilis from wild populations in California and neighbouring states. Using Painter's technique,[15] they studied the polytene chromosomes and discovered that all the wild populations were polymorphic for chromosomal inversions. All the flies look alike whatever inversions they carry, so this is an example of a cryptic polymorphism. Evidence accumulated to show that natural selection was responsible:

By 1951 Dobzhansky was persuaded that the chromosome morphs were being maintained in the population by the selective advantage of the heterozygotes, as with most polymorphisms.[17][18][19]