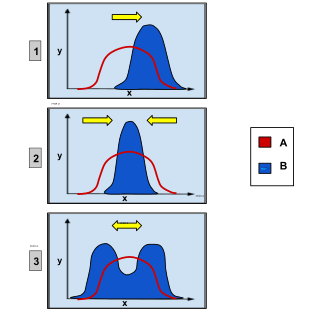 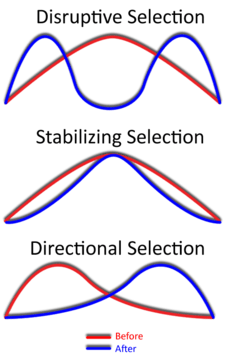 In population genetics, directional selection is a mode of natural selection in which an extreme phenotype is favored over other phenotypes, causing the allele frequency to shift over time in the direction of that phenotype. Under directional selection, the advantageous allele increases as a consequence of differences in survival and reproduction among different phenotypes. The increases are independent of the dominance of the allele, and even if the allele is recessive, it will eventually become fixed.[1]

There are different statistical tests that can be run to test for the presence of directional selection in a population. A few of the tests include the QTL sign test, Ka/Ks ratio test and the relative rate test. The QTL sign test compares the number of antagonistic QTL to a neutral model, and allows for testing of directional selection against genetic drift.[5] The Ka/Ks ratio test compares the number of non-synomous to synomous substitutions, and a ratio that is greater than 1 indicates directional selection.[6] The relative ratio test looks at the accumulation of advantageous against a neutral model, but needs a phylogenetic tree for comparison.[7]

An example of directional selection is fossil records that show that the size of the black bears in Europe decreased during interglacial periods of the ice ages, but increased during each glacial period. Another example is the beak size in a population of finches. Throughout the wet years, small seeds were more common and there was such a large supply of the small seeds that the finches rarely ate large seeds. During the dry years, none of the seeds were in great abundance, but the birds usually ate more large seeds. The change in diet of the finches affected the depth of the birds’ beaks in the future generations.Their beaks range from large and tough to small and smooth.[8]

African cichlids are known to be some of the most diverse fish and evolved extremely quickly. These fish evolved within the same habitat, but have a variety of morphologies, especially pertaining to the mouth and jaw. Albertson et al. 2003 tested this by crossing two species of African cichlids with very different mouth morphologies. The cross between Labeotropheus fuelleborni (subterminal mouth for biting algae off rocks) and Metriaclima zebra (terminal mouth for suction feed) allowed for mapping of QTLs affecting feeding morphology. Using the QTL sign test definitive evidence was shown to prove that directional selection was occurring in the oral jaw apparatus. However, this was not the case for the suspensorium or skull (suggesting genetic drift or stabilizing selection).[9]

Sockeye salmon are one of the many species of fish that are anadromous. Individuals migrate to the same rivers in which they were born to reproduce. These migrations happen around the same time every year, but Quinn et al. 2007 shows that sockeye salmon found in the waters of the Bristol Bay in Alaska have recently undergone directional selection on the timing of migration. In this study two populations of sockeye salmon were observed (Egegik and Ugashik). Data from 1969-2003 provided by the Alaska Department of Fish and Game were divided into five sets of seven years and plotted for average arrival to the fishery. After analyzing the data it was determined that in both populations average migration date was earlier and was undergoing directional selection. The Egegik population experienced stronger selection and shifted 4 days. Water temperature is thought to cause earlier migration date, but in this study there was no statistically significant correlation. The paper suggests that fisheries can be a factor driving this selection because fishing occurs more in the later periods of migration (especially in the Egegik district), preventing those fish from reproducing.[10]