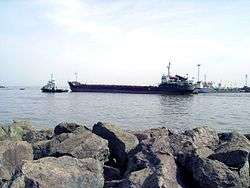 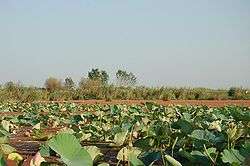 Anzali Lagoon on the Caspian Sea

Bandar-e Anzali (Persian: بندرانزلی‎‎, also Romanized as Bandar-e Anzalī; before the Iranian Revolution, was renamed from Bandar-e Anzali to Bandar-e Pahlavi by Reza Pahlavi)[1] is a city in Guilan Province, Iran. At the 2006 census, its population was 109,687, in 32,424 families.[2]

Bandar-e Anzali (Anzali Port) is a harbour town ("Bandar" means "port") on the Caspian Sea, close to Rasht. Bandar-e Anzali is one of the most important seaports in the north of Iran. It consists of an island called Mianposhteh and the surrounding lands. Tourist attractions include a clock tower called Manareh, the long harbour promenade, and the water-logged delta of and beach along the Sefid River. Bandar-e Anzali is the port where the Polish Anders Army disembarked, in an operation that lasted from April 1 until October, 1942, after evacuating from the USSR. The Polish Cemetery in the city was created the same year.

Anzali is an old city in ancient Iran, they are related to Kadusin, owing to their pleasant relationship with Cyprus and their cooperation in battles, they changed their name to Anzan (Anshan-e Pars) "The Anshans of Persia", in which the Greeks called Anzaluy. This word In Pahlavi language means Anzalag and the variant Persian form of it is Anzalazh. Anzali Gulf was a safe harbour for trade ships and fishing boats. It was renamed to Pahlavi in 1935.

In 1919, with the collapse of General Anton Denikin's White Russian army, eighteen of his ships sought refuge in Anzali. On 18 May 1920, a Soviet flotilla of thirteen ships launched a surprise attack on Anzali, capturing the British garrison and the eighteen White Russian ships. This allowed for the establishment of the short-lived Persian Socialist Republic and the Persian Communist Party. Soviet authorities denied responsibility for the attack, blaming the local Russian naval commander for attacking under his own authority.[3]

Its wonderful lagoon, Customs and City Hall edifice (Shahrdari), Mian Poshte Palace and Motamedi Edifice, are its tourist attractions. Until 1980, when it was moved to Noshahr, Anzali was the site of the Caspian University of Naval Science. The structure Of Naser-al-din Shah Place which was built by Moayer-ol-mamalekk and its famous Sangi Bath was destroyed by people and natural factors.

A wonder of Sangi Bath was the system of heating and durability water in its basins. Some groups think that Motamedi edifice had been changed; it is now its police office. This Ghajar Structure built in two floors with the help of Mirza Abd-ol-Vahab.[4] 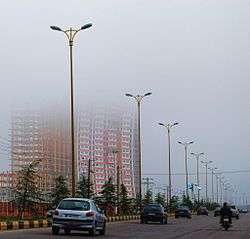 Bandar-e Anzali has the most humid climate of any city in Iran, having a climate somewhat similar in its heavy autumn and early winter rainfall and persistent high humidity and low sunshine to the Sea of Japan coast of Japan, though it receives much less summer rainfall than that region. It remains classified as a humid subtropical climate (Köppen Cfa). The warm and humid weather has allowed this region to grow crops such as rice and tea that require very large amounts of moisture, especially with the extra water draining from the Elburz Mountains.

Bandar-e Anzali is a center of caviar production. The preparation and marketing of which is a state monopoly, handled through The Iranian Fishing Company under the control of the Finance Ministry. The public is not admitted to the immense refrigerated hangars where tons of sturgeons, some as large as 3 meters long and weighing 100 kilograms, are stored after the removal of the caviar, usually equivalent to about one tenth of their weight.

The Iranian sports club Malavan is from Bandar-e Anzali, The football/soccer club Malavan currently plays in the Iran Pro League.

The people of Anzali speak Gileki as the maternal language and Persian as the national language. A significant amount of ethnic Azerbaijanis are found as well, most of whom are emigrants from the Azerbaijan Republic, from during the era when it was under Soviet rule.[5]