For the administrative subdivision, see Rasht County. For the valley in Tajikistan, see Rasht Valley.

Rasht (Persian: رشت‎‎ Rašt; Gilaki: Rəsht; also Romanized as Resht and Rast, and often spelt Recht in French and older German manuscripts)[1] is the capital city of Gilan Province, Iran. As of the 24 October 2011 census, its population was 639,951.[2]

Rasht is the largest city on Iran's Caspian Sea coast. It is a major trade center between Caucasia, Russia and Iran using the port of Bandar-e Anzali. Rasht is also a major tourist center with the resort of Masouleh in the adjacent mountains and the beaches of Caspian as some of the major attractions.

Historically, Rasht was a major transport and business center which connected Iran to Russia and Europe, and because of this was known as the "Gate of Europe". The city has a history that goes back to the 13th century but its modern history dates back to the Safavid era during which Rasht was a major silk trade center with numerous textile workshops. 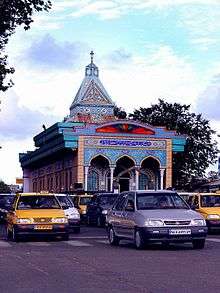 Tomb of Dana ye Ali, a famous resident of the Black Stalk Village in Rasht.

For a more comprehensive treatment of the region, see the history section of Gilan. 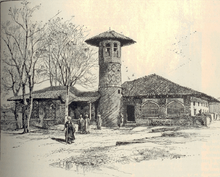 Rasht was first mentioned in historical documents in 682 CE, but it is certainly older than this. It has seen the Sassanid era, the armies of Peter the Great and later Russian rulers, and British colonialism. The people of Rasht also played a major role in the Constitutional Revolution of Iran.

The name Rasht comes most plausibly from the verb reshtan, weaving. Rasht has, along with regions around Tabriz and Tehran, one of the earliest industry plants during the last quarter of the 19th century, prominently in fields such as fishing, caviar production, the Caspian sea oil pipeline construction and textiles. During the 20th century, until the mid-70s, Gilan and the Rasht region was the third-ranking industrial city in Iran by number of workers and per capital productivity. It lost its cultural and industrial status to a large extent after the 1970s.

The people of Rasht played a prominent role in instigation and radicalization of the Persian Constitutional Revolution (1905–1907). Rasht is the birthplace of Mīrzā Kūchak Khān, one of the leading figures of the Constitutional Revolution. His own movement in Gilan, which went by the name of Jangalis, represented a pro-modern and social democratic program for reformation of Muslim rituals and traditions. Mirza established the short-lived Persian Socialist Soviet Republic in 1920 after the defeat of the constitutional forces and in coalition with Iranian communists. The republic had the support of the newly established Russian Red Army. The Soviet Government, after a turn of military and political strategy proposed by Trotsky, withdrew its support and the republic itself was tormented by the inner conflicts between the newly established Iranian Communist Party (1919) and the Jangalis and other factions. The republic was finally defeated by the Iranian army under the command of Reza Shah.

Rasht is growingly turning into an industrialized town like most of the Iranian large cities and province capitals. Enjoying the Kadus International Hotel and hundreds of tourist attractions, Rasht receives thousands of foreign tourists annually, mostly from Austria, Germany, Netherlands, France, Australia, Japan and African countries like Senegal and Cameroon as well as countries from Oceania like Micronesia. Rasht is known for its famous building of municipality located in a square called the Square of Municipality which was constructed circa 1900 but being renovated each year. Due to the high amount of humidity in Rasht which damages and destroys the aged buildings, the native, older architectural texture of Rasht is gradually being replaced with the modern skyscrapers and apartments.

The culture of consumerism is prevalent among the people of Rasht as a cultural and urban center which is historically engaged in close commercial and political ties with the United Kingdom, Russia and France. Due to this background which makes the inhabitants much familiar with the industrial, cultural and political developments of the west, the finance and credit institutions are more willing to open representative offices and bureaus in Rasht and it has made the city a center of various banks and financial organizations. There are many commercial centers, malls and financial institutions in Rasht including one branch of the Exports Development Bank of Iran which is an international bank dealing with the Iranian exports. The organizers and directors of national Iranian or non-Iranian banks afford to spend considerable amounts of budgets to construct attractive and modern buildings for their offices in Rasht.

Since the Islamic Revolution of 1979 in Iran, there have always been requests on behalf of Russian, Turkish and Azeri banks to open branches in Rasht and that is why the city is endowed as the "gate of Europe" in Iran. The head consulate of the Russian Federation government is located in Rasht and some of the other Caspian region countries are also keen to establish representative headquarters in Rasht alongside their embassies in Tehran. Some evidences are the University of Gilan which was constructed jointly by the governments of Iran and West Germany about 40 years ago, the building of IRIB representatives in Rasht which was constructed jointly by the Iranian and Belgian engineers.

Rasht has a humid subtropical climate (Köppen climate classification: Cfa), with warm summers and cool winters that is one of the wettest in Iran.[3] It is also relatively continental with cooler winters and higher seasonal temperature variation than in much of Iran, despite its marine position. The average humidity is 81.2%, contrasting heavily with cities in many other parts of Iran. Sunshine hours, averaging roughly 1,520 per year, are lower than in most places in Iran and also compared to most places at this latitude.

The people of Rasht speak Gileki as their mother tongue and Persian language as of the official language of Iran. Gileki is spoken by more than 3 million people. The vast majority of Gileki speakers live in the Gilan Province of Iran. It belongs to the northwestern branch of the Iranian languages. The Iranian languages form a top-level constituent of the Indo-European language family. Gileki is closely related to Mazanderani and is subdivided into two main dialects: Bie-pas and Bie-pish. Bie-pas dialect is mainly spoken in west of Sepidroud including Rasht and Fuman while Bie-pish dialect belongs to eastern part of Gilan including Lahijan and Langrud.

In some rural areas near the Rasht, school teachers give their courses in Gileki rather than Persian.

Rashti people are said to spend much on books, clothes and food. They spend the leisure times going to cinemas, art exhibitions, music concerts and international book fairs that are being held in the city most of times in a year. Also the municipality kicks off sports, cultural or IT-related competitions to involve the youth in healthy and constructive activities. The most beloved competition is the annual blogging competition which awards the top young bloggers each year.

The dominant cuisine of Rasht people is the various types of fish. Mirza-Qasemi, Vavishka (a type of Haggis), Nargesi, Baqala Qatoq and Ashpal are some other popular local dishes of this city. Between the local cookies of Rasht, Reshte Xoshkar is a well-known one. Zeitoun Parvarde is a kind of delicacies prepared from olive and it is a popular seasoning in Rasht City.

The people of Rasht have always been regular fans of football which is the beloved sport in the city. Most are fans of Damash Gilan who play in the Azadegan League or Sepidrood Rasht who play in the 2nd Division. Damash Gilan is the newer version of former Pegah football club that belonged to the municipality of Rasht, but was purchased later by the mineral water factory of Damash and changed its name and properties to Damash Gilan. The home stadium of Damash Gilan is Dr. Azodi Stadium which is an old stadium dating back to almost 40 years ago and its capacity is 11,000 people. Sardar Jangal Stadium is the cities second stadium.

Following football, wrestling, judo and weightlifting are the most popular sports of youth in Rasht and that is due to the enchanting appearance of Iranian wrestlers and weightlifters in the international competitions like Olympics. The outstanding figure of world weightlifting and the two-time olympics Gold medal winner Hossein Rezazadeh is a main inspirer of Rasht youth to try Weightlifting as their professional job. Asghar Ebrahimi who was the squad captain of Iranian weightlifting team at the 2008 Olympics is from Rasht and a successful example of those youth from Rasht who tried this national field of sport after Hossein Rezazadeh.

The airport is in close affiliation with hundreds of flights by national and international airlines, including Mahan Air, Iran Air, Iran Aseman Airlines, Kish Air and receives more than 2000 flights annually.

Rasht has signed the treaty of city twinning with the following cities: