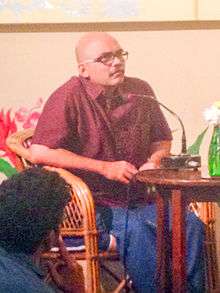 Baradwaj Rangan is an Indian film critic, writer, and the deputy editor of The Hindu. He won the National Film Award for Best Film Critic in 2006. Before joining The Hindu, Rangan wrote for The New Indian Express. He has also authored two books, worked as a dialogue writer for the unreleased film Kadhal 2 Kalyanam, and is a teacher at the Asian College of Journalism, Chennai.

Baradwaj Rangan had no formal training in filmmaking or cinema writing.[1] He is a chemical engineering graduate from Birla Institute of Technology and Science, Pilani.[2] According to him, it was a time when "parents considered only medicine or engineering as ‘serious professions’", that he did not have interest but continued with it anyway.[1] Rangan claims that he was fascinated with writing and loved reading critical analyses on world cinema, especially by American critics.[1] He got selected for a workshop by the Advertising Agencies Association of India (AAAI), Mumbai which led to him having a stint as a copywriter with J. Walter Thompson in Chennai.[1][2] After that, Rangan received a full scholarship from the Marquette University, Milwaukee for a Master's degree in Advertising and Public relations, focusing on Internet advertising. Later, Rangan worked as an IT Consultant in the United States for about five years. He still had the urge to write and started reviewing films for the website sitagita.com.[2] That was when he was noticed by Sushila Ravindranath, then the editor of The New Sunday Express, the Sunday edition of The New Indian Express. Rangan worked there for two years,[1] before shifting to The Hindu, which he became the deputy editor of.[3] Rangan also wrote for the magazine Tehelka, while still working at The New Indian Express.[4]

Rangan has authored two books: Conversations with Mani Ratnam (2012), wherein he interviews film director Mani Ratnam on the perspectives of his films,[5][6] and Dispatches From The Wall Corner: A Journey through Indian Cinema (2014),[7] which he describes as a "panoramic view of Indian cinema".[8] He also wrote an essay in Subramaniyapuram: The Tamil Film in English Translation (2014).[9] Rangan made his debut as a dialogue writer with Kadhal 2 Kalyanam,[10] which never saw a theatrical release.[11] He also teaches a course on cinema at the Asian College of Journalism, Chennai,[12] and has interviewed notable personalities like producer/writer G. Dhananjayan,[13] and director Gautham Menon.[14]

At the 53rd National Film Awards which took place in 2006, Rangan won in the Best Film Critic category. The citation given to him by the jury of the 53rd National Film Awards reads, "The Award is presented for intelligent and reader-friendly reviews of popular cinema with a depth of understanding of the form, a discernible passion for the medium bulwarked consistently by a knowledge of the trends and touchstones of global cinema."[2] In 2013, Arul Mani of Tehelka described Rangan as "far and away the most intelligent writer we have in India when it comes to cinema".[6]