For the bifurcated North Indian edition, see The Indian Express.

Indian Express was first published on September 5, 1932 in Madras (now Chennai) by an Ayurvedic doctor and Indian National Congress member P Varadarajulu Naidu, publishing from the same press where he ran the Tamil Nadu Tamil weekly. But soon, on account of financial difficulties, he sold it to S. Sadanand, founder of The Free Press Journal, another English newspaper.

In 1933, The Indian Express opened its second office in Madurai and launched the Tamil daily Dinamani on September 11, 1934. Sadanand introduced several innovations and reduced the price, but later sold part of his stake in the form of convertible debentures to Ramnath Goenka due to financial difficulties. When The Free Press Journal further went into financial decline in 1935, Sadanand lost ownership of Indian Express after a long controversial court battle with Goenka, where blows were exchanged. Finally, a year later, Goenka bought the rest of the 26 per cent stake from Sadanand, and the paper came under his control, who took the already anti-establishment tone of the paper to greater heights. At that time it had to face stiff competition from the well-established The Hindu and the Mail, besides other prominent newspapers. In the late 1930s, the circulation was no more than 2,000.

In 1939 Goenka bought out Andhra Prabha, a prominent Telugu daily. It gained the name Three Musketeers for the three dailies. In 1940 the whole premises were gutted by fire. The Hindu, its rival, helped considerably in re-launching the paper, by getting it printed temporarily at one of its Swadesimithran’s press and later offering its recently vacated premises in Madras at 2, Mount Road later to become the landmark Express Estates. This relocation helped the Express obtain better high-speed printing machines.

In later years, Goenka started the Mumbai edition with the landmark Express Towers as his office when the Morning Standard was bought by him in 1944. Two years later it became the Mumbai edition of The Indian Express. Later on, editions were started in cities like Madurai (1957), Bangalore (1965) and Ahmedabad (1968). The Financial Express was launched in 1961 from Mumbai, a Bangalore edition of Andhra Prabha was launched in 1965, and Gujarati dailies Lok Satta and Jansatta in 1952, from Ahmedabad and Baroda.

The Delhi edition started was when the Tej group's Indian News Chronicle was acquired in 1951, which from 1953 became the Delhi edition of Indian Express. In 1990 it bought the Sterling group of magazines and, along with it, the Gentleman magazine.

After Goenka's demise in 1991, two of the family members split the group into Indian Express Mumbai with all the north Indian editions, while the southern editions were grouped as Express Publications (Madurai) Limited with Chennai as headquarters.

The New Indian Express has a net paid circulation of 435,618 copies.[1] NIE achieves its biggest penetration (paid sales per head of population) in the state of Kerala. It claims to be the first Indian newspaper to give insurance benefits to its subscribers. It is published in a geographical area that covers approximately 24 per cent of the national population. The New Sunday Express (the Sunday edition of the NIE) is arguably the flagship publication, with magazine supplements incorporating national and international themes and sections on developmental issues, society, politics, literature, arts, cinema, travel, lifestyle, sports, new-age living, self-development and entertainment. 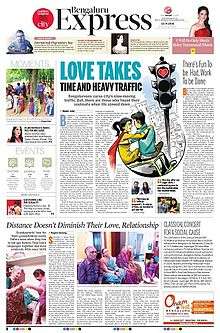 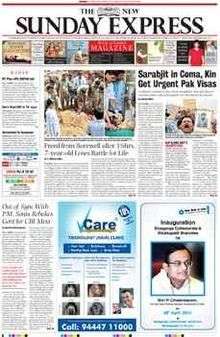 The New Sunday Express front page design as of April 2011

During late 2007/early 2008, there was a big shakeout of editorial staff, with many old hands leaving to make way for new. In April 2008, the newspaper underwent a major, drastic and exceptionally modern layout and design makeover and launched a huge advertising campaign.

It renamed all the city supplements, calling them City Express and focusing more on the respective city's culture and lifestyle, rather than hard news. Its other supplements, which appear on a weekly or fortnightly basis, are on career and education. The 24-page education supplement, called edex, was launched in early 2010. "Indulge" is another lifestyle supplement weekly published from major cities in South India on Fridays.

"The Sunday Standard" is another publication, released as a weekly newspaper with 16 pages published from New Delhi, which comes with its weekly "Sunday Standard Magazine" of 12 pages.

At present, The New Indian Express is the only national daily which publishes news of the far-flung Andaman and Nicobar Islands every day. The TNIE has a staffer at Port Blair, the capital city of the remote archipelago. 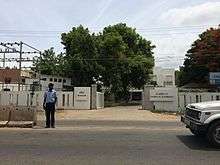 The New Indian Express and Dinamani press in Coimbatore

The Group runs the following websites: