Barnes & Noble, Inc., is a Fortune 500 company, the largest retail bookseller in the United States, and a leading retailer of content, digital media and educational products in the country. The company operates 640 retail stores (as of January 1, 2016) in all 50 U.S. states.[5]

Barnes & Noble operates mainly through its Barnes & Noble Booksellers chain of bookstores and the company's headquarters are at 122 Fifth Avenue in the Ladies' Mile Historic District in Manhattan in New York City.[6]

After a series of mergers and bankruptcies in the American bookstore industry since the 1990s, Barnes & Noble stands as the United States' last remaining national bookstore chain.[7][8] Previously, Barnes and Noble operated the chain of small B. Dalton Booksellers stores in malls until they announced the liquidation of the chain. The company is known for large retail outlets, many of which contain a café serving Starbucks coffee. Most stores sell books, magazines, newspapers, DVDs, graphic novels, gifts, games, toys, music, and Nook e‑readers and tablets. 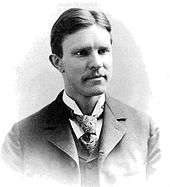 In 1917, Noble bought out Hinds and entered into a partnership with William Barnes, son of his old friend Charles; the name of the store was changed accordingly to Barnes & Noble.[14][15] Charles Barnes had opened a book-printing business in Wheaton, Illinois in 1873; William Barnes divested himself of his ownership interest in his father's firm just before his partnership with Noble and it would go on to become Follett Corporation. Although the flagship store once featured the motto "founded in 1873," the C. M. Barnes-Wilcox Company never had any connection to Barnes & Noble other than the fact that both were partly owned (at different times) by William Barnes.

In 1930, Noble sold his share of the company to William Barnes' son John Wilcox Barnes.[16] Noble died on June 6, 1936, at the age of 72.[17] In the long history of the bookstore, the namesake partnership was a brief interlude of thirteen years. 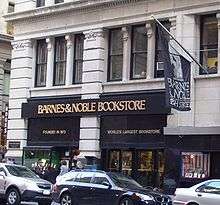 In 1932, at the height of the Great Depression, the bookstore was moved to a flagship location on 18th Street and Fifth Avenue,[18] which served as such until it closed in 2014. The Noble family retained ownership of an associated publishing business, and Barnes & Noble opened a new publishing division in 1931.[16] In 1940, the store was one of the first businesses to feature Muzak; it underwent a major renovation the following year.[19] That decade the company opened stores in Brooklyn and Chicago.[20] William Barnes died in 1945, at the age of 78 and his son John Wilcox Barnes assumed full control.[20] The company underwent a significant expansion in the 1950s and 1960s, opening an additional retail store on Twenty-third Street in Manhattan and shops near the City University of New York, Harvard and other Northeast college campuses.[21] John Barnes died in 1964 and the company was sold to the conglomerate Amtel in 1966.[22] 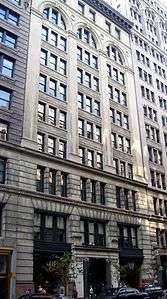 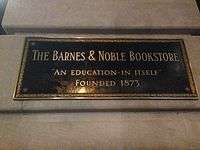 The business was purchased in 1971, by Leonard Riggio for $1.2 million.[21] By then it had been badly mismanaged over the prior two years and consisted only of "a significantly reduced wholesale operation and a single retail location—the store at 105 Fifth Avenue."[21] In 1974, Barnes & Noble became the first bookstore to advertise on television and a year later, the company became the first bookseller in America to discount books, by selling The New York Times best-selling titles at 40% off the publishers' list price.[23] During the 1970s and 1980s, Barnes & Noble opened smaller discount stores, which were eventually phased out in favor of larger stores. They also began to publish their own books to be sold to mail-order customers. These titles were primarily affordable reissues of out-of-print titles and selling them through mail-order catalogs allowed Barnes & Noble to reach new customers nationwide.[23]

In November 1974, in response to a question from a member of the studio audience, the British twin brothers Norris McWhirter and Ross McWhirter, who were editors of the British-produced Guinness Book of Records, claimed on the BBC One television programme Record Breakers that the Fifth Avenue store of Barnes and Noble had overtaken that of London's Foyles bookshop to become the world's biggest bookstore.[24]

Barnes & Noble continued to expand throughout the 1980s and in 1986, purchased the primarily shopping mall-based B. Dalton chain from Dayton Hudson for an estimated $275 million to $300 million.[25] The last B. Dalton stores were slated to close in January 2010.[26] In 1989, Barnes and Noble had purchased the 22-store chain Bookstop. Solveig Robinson, author of The Book in Society: An Introduction to Print Culture, wrote that the purchase "gave [Barnes and Noble] the necessary know-how and infrastructure to create what, in 1992, became the definitive bookselling superstore."[27] The acquisition of the 797 B. Dalton bookstores turned the company into a nationwide retailer, and by the end of fiscal year 1999, the second-largest online bookseller in the United States.[26] B&N's critics claim that it has contributed to the decline of local and independent booksellers.[28]

Before Barnes & Noble created its web site, it sold books directly to customers through mail-order catalogs. It first began selling books online in the late 1980s, in an early generation venue called Trintex, a joint venture between Sears and IBM, but the company's website was not launched until May 1997.[29] According to the site, it now carries over 2 million titles.[30]

Video games and related items were sold in the company's GameStop retail outlets from 1999 until late 2004, when the division was spun off by distributing its 59% stake in GameStop to stakeholders of Barnes & Noble's, making it an independent company.[34]

Website president William Lynch was named CEO in 2010. He is credited with helping launch the company's electronic book store and overseeing the introduction of its electronic book reader, the Nook. Many observers saw his appointment as underscoring the importance of digital books to Barnes & Noble's future. Steve Riggio stayed on as vice chairman.[35] Lynch resigned in mid-2013,[36] and he was replaced by Chief Financial Officer Michael Huseby early the next year.[37] Following the spinoff of Barnes and Noble Education, Huseby departed to head the new firm; his place was filled in mid-2015 by Ronald Boire,[38][39] who departed one year later.[40]

After the bankruptcy and closure of its chief competitor, Borders Group, in 2011,[41] Barnes & Noble became the last remaining national bookstore chain in America.[7][8] This followed a series of mergers and bankruptcies in the American bookstore industry since the 1990s, which also saw the demise of Waldenbooks, Barnes & Noble's own subsidiary B. Dalton, and Crown Books, among others. Barnes & Noble's largest physical bookstore rival is now Books-A-Million, which does not operate in the Western US. Barnes & Noble also faces competition from general retailers, especially from Amazon.com, and from regional and independent booksellers.

At the same time, Barnes & Noble has reduced its overall presence; it closed its original flagship store in early 2014,[42] and mid-2014 saw it spinning off the Nook Media division.[43]

One of these titles, The Gentle Art of Verbal Self-Defense by Suzette Haden Elgin, has sold over 250,000 copies.[29] The reissued edition of The Columbia History of the World by John Garrity, for example has sold over 1 million copies.[29]

Since then, the company has expanded its publishing operation. This expansion was aided by the company's 2001 acquisition of SparkNotes, an educational website and publishing company.[44] Further expansions of the company's publishing business include the purchase of Sterling Publishing in 2003.[29] 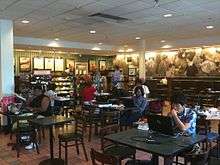 The first store to feature a café serving Starbucks beverages was in Springfield, New Jersey, in 1993. Since then, most stores have been amended or constructed specifically to feature a café serving Starbucks beverages, Harney & Sons or Tazo Tea, FIJI Bottled Water, bakery goods from The Cheesecake Factory, candy from Godiva Chocolatiers, sandwiches and other specialty products. Although the cafés are owned and operated by Barnes & Noble, servers follow Starbucks' standards in beverage preparation. The Barnes & Noble membership card is accepted to receive a discount on any café related goods.[46] Starbucks Rewards and gift cards are not accepted at Barnes & Noble cafés.

In 2004, Barnes & Noble began offering Wi-Fi in the café area of selected stores, using SBC FreedomLink (now the AT&T Wi-Fi network). All stores currently offer Wi-Fi, an effort which was completed in 2006. Since July 27, 2009, Wi-Fi is offered for free to all customers.[47] 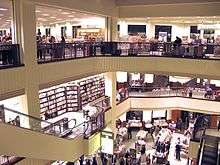 The Barnes & Noble at The Grove at Farmers Market, Los Angeles. 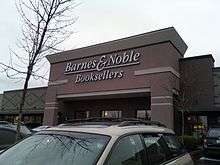 In 2016, Barnes & Noble announced plans during an investor conference to open four concept stores featuring restaurants twice the size of their cafés that would offer better food, wine, and beer. The restaurants, which are planned to open in fiscal year 2017, are expected to drive sales growth; should sales meet expectations, additional concept stores could open and stores with enough space to accommodate the restaurant could have the restaurants incorporated there as well. Company officials planned to open the first such stores in New York, Minnesota, California, and Virginia.

The Barnes & Noble restaurants are expected to include a waitstaff and a full menu for breakfast, lunch, and dinner.[48]

Barnes & Noble hires community business development managers to engage in community outreach. These managers' responsibilities include organizing in-store events, such as author appearances, children's storytimes and book groups. Community business development managers also work closely with local schools and groups to promote literacy and the arts. For example, Barnes & Noble sponsors a children's summer reading program that promotes literacy and puts over 2 million books into the hands of the children each year.[49] Barnes & Noble also hosts bookfairs, which raise funds for schools and libraries and an annual holiday book drive to collect books for disadvantaged children. Barnes & Noble stores collected and donated nearly 1.5 million books to more than 650 local charities across the country that provide services to disadvantaged children during the 2014 Holiday Book Drive.[50] To promote nationwide literacy among 1st to 6th graders and encourage more reading during the summer, Barnes & Noble has implemented a summer challenge: if children read eight books and write about their reading, Barnes & Noble will give the reader a free book.[51]

The Nook competes with the Amazon Kindle, Kobo eReader, and other e-reader offerings and color tablets used sometimes as readers, such as Apple's iBooks for iOS devices. Various Nook models feature a 6-inch, 7-inch, or larger touchscreen.[55] Version 1.3 of the Nook introduced Wi-Fi connectivity, a web browser, a dictionary, chess, and sudoku games, and a separate, smaller color touchscreen that serves as the primary input device. The Nook also features a Read in Store capability that allows visitors to stream and read any book for up to one hour while shopping in a Barnes & Noble bookstore. According to a June 2010 CNet article, the company planned to expand this feature to include periodicals in the near future.[56] The color version of the Nook introduced a 7-inch color touchscreen and the ability to view at a portrait or landscape orientation.[57]

In November 2012, the technology publications Mashable and Techdirt criticized the license agreement with which Barnes & Noble sells ebooks to consumers, pointing out that the rights to re-download a purchased ebook expire when the customer's credit card expires, and a valid credit card must be added to the account to restore this functionality.[59][60]

In March 2016, Barnes & Noble announced it would close the Nook App Store and Nook Video and in the UK close the Nook Store on March 15.[65] It will continue to sell ebooks as well as digital magazines and newspapers in the US.

In August 2015, Barnes & Noble announced the completion of the separation of its Retail and College businesses. Barnes & Noble Education, Inc. is now an independent public company and the parent of Barnes & Noble College, trading on the New York Stock Exchange under the ticker symbol, "BNED". Barnes & Noble College Booksellers, previously owned by company chairman Leonard Riggio, operated the self-proclaimed "world's largest bookstore" on Fifth Avenue and 18th Street in New York City, from 1932 to 2014. This flagship store carried a large variety of textbooks, medical and legal books, and medical supplies, in addition to the various trade titles carried at the company's main stores.[66]