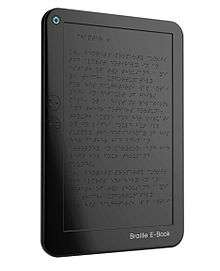 The concept design of a braille e-book by Yanko Design

A braille e-book is a refreshable braille display using electroactive polymers or heated wax rather than mechanical pins to raise braille dots on a display. Though not inherently expensive, due to the small scale of production they have not been shown to be economical. A Korean concept design published in 2009 by Yanko Design attracted attention.[1][2][3] A British prototype design called "Anagraphs" was created in 2013,[4] but funding from the European Union ran out before it could be brought to production.[5] A Braille Ebook/Tablet is slated to be released for purchase in the 4th quarter of 2016 by the Austrian company Blitab. It is expected to be priced under US$3000.