Baseball was first introduced to Japan in 1872 and is currently among the country's most popular participatory and spectator sports.[1] The first professional competitions emerged in the 1920s. The current league, Nippon Professional Baseball, consists of two leagues of 6 teams each. High school baseball enjoys a particularly strong public profile; the Japanese High School Baseball Championship (Summer Kōshien) each August is nationally televised and includes regional champions from all of Japan's 47 prefectures.

Baseball is commonly called 野球 (やきゅう; yakyū) in Japanese, combining the characters for field and ball. According to Japan's National Tourism Organization, "Baseball is so popular in Japan that many fans are surprised to hear that Americans also consider it their ‘national sport.’"[2] 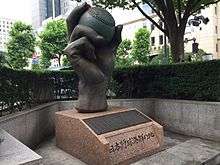 Baseball was first introduced to Japan as a school sport in 1872 by American Horace Wilson,[3] an English professor at the Kaisei Academy in Tokyo. The first organized adult baseball team, called the Shimbashi Athletic Club, was established in 1878.

At a match played in Yokohama in 1896, a team from Tokyo's Ichikō high school convincingly defeated a team of resident foreigners from the Yokohama Country & Athletic Club. The contemporary Japanese language press lauded the team as national heroes and news of this match greatly contributed to the popularity of baseball as a school sport.[4]

Professional baseball in Japan first started in the 1920s, but it was not until the Greater Japan Tokyo Baseball Club (大日本東京野球クラブ Dai-nippon Tōkyō Yakyū Kurabu) a team of all-stars established in 1934 by media mogul Matsutarō Shōriki, that the modern professional game found continued success — especially after Shōriki's club matched up against an American All-Star team that included Babe Ruth, Jimmie Foxx, Lou Gehrig, and Charlie Gehringer. While prior Japanese all-star contingents had disbanded, Shōriki went pro with this group, playing in an independent league.

The first Japanese professional league was formed in 1936, and by 1950 had grown big enough to divide into two leagues, known as Nippon Professional Baseball (NPB). (It is called Puro Yakyū (プロ野球), which simply is a translation of professional baseball.) The Central League included the established teams, and the Pacific League was made up of new teams and players. The Pacific League uses the designated hitter style of play. The pro baseball season is eight months long with games beginning in April. Teams play 144 games (as compared to the 162 games of the American major league teams), followed by a playoff system, culminating in a championship held in October, known as the Japan Series.

Corporations with interests outside baseball own most of the teams. Historically, teams have been identified with their owners, not where the team is based. However, in recent years, many owners have chosen to include a place name in the names of their teams; the majority of the 12 Nippon Professional Baseball League (NPB) teams are currently named with both corporate and geographical place names.

The rules are essentially those of Major League Baseball, but technical elements are slightly different: The Nippon league uses a smaller baseball, strike zone, and playing field. Five Nippon league teams have fields whose small dimensions would violate the American Official Baseball Rules.[5]

Also unlike MLB, game length is limited and tie games are allowed. In the regular season, the limit is twelve innings, while in the playoffs, there is a fifteen-inning limit (Games in Major League Baseball, by comparison, continue until there is a winner; the 2002 All-Star Game, an exhibition game, was a notorious exception.) Additionally, during the 2011 NPB season, an inning occurring three hours and thirty minutes after the first pitch was the final inning, due to power limits imposed because of the 2011 Tōhoku earthquake and tsunami.

NPB teams have active rosters of 28 players, as opposed to 25 in MLB (26 on days of scheduled day-night doubleheaders). However, the game roster has the same 25-player limit as MLB. Before each game, NPB teams must designate three players from the active roster who will not appear in that contest.[6] A team cannot have more than four foreign players on a 25-man game roster, although there is no limit on the number of foreign players that it may sign. If there are four, they cannot all be pitchers nor all be position players.[7] This limits the cost and competition for expensive players of other nationalities, and is similar to rules in many European sports leagues' roster limits on non-European players.

In each of the two Nippon Professional Baseball leagues, teams with the best winning percentage go on to a stepladder-format playoff (3 vs 2, winner vs 1). Occasionally, a team with more total wins has been seeded below a team that had more ties and fewer losses and, therefore, had a better winning percentage. The winners of each league compete in the Japan Series.

On September 18, 2004, professional baseball players went on a two-day strike, the first strike in the history of the league, to protest the proposed merger between the Orix BlueWave and the Osaka Kintetsu Buffaloes and the failure of the owners to agree to create a new team to fill the void resulting from the merger. The strike was settled on September 23, 2004, when the owners agreed to grant a new franchise in the Pacific League and to continue the two-league, 12-team system. The new team, the Tohoku Rakuten Golden Eagles began play in the 2005 season.

These nationwide tournaments enjoy widespread popularity, arguably equal to or greater than professional baseball. Qualifying tournaments are often televised locally and each game of the final stage at Kōshien is televised nationally on NHK. The tournaments have become a national tradition, and large numbers of students and parents travel from hometowns to cheer for their local team. It is a common sight to see players walking off the field in tears after being eliminated from the tournament by a loss.

Amateur baseball leagues exist all over Japan, with many teams sponsored by companies. Amateur baseball is governed by the Japan Amateur Baseball Association (JABA). Players on these teams are employed by their sponsoring companies and do not receive salaries as baseball players but as company employees. The best teams in these circuits are determined via the Intercity Baseball Tournament and the Industrial League National Tournament.[8]

The level of play in these leagues is very competitive - Industrial League players are often selected to represent Japan in international tournaments[8] and Major League Baseball players such as Hideo Nomo (Shin-Nitetsu Sakai),[9] Junichi Tazawa (Nippon Oil)[10] and Kosuke Fukudome (Nihon Seimei),[11] have been discovered by professional clubs while playing industrial baseball.

The national team is currently ranked #1 in the world by the International Baseball Federation.[14]