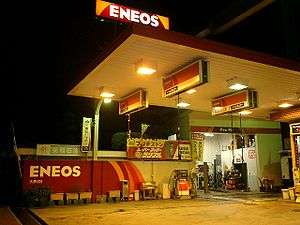 An ENEOS service station in Japan

The JX Nippon Oil & Energy Co. (JXエネルギー株式会社, JX Enerugī Kabushiki-gaisha, TYO: 5001), or NOC or Shin-Nisseki (新日石) is a Japanese petroleum company. Its businesses include the exploration, importation, and refining of crude oil; the manufacture and sale of petroleum products, including fuels and lubricants; and other energy-related activities.

Its products are sold under the brand name ENEOS, which is also the name used for its service stations. It is the largest oil company in Japan, and in recent years it has been expanding its operations in other countries.

Nippon Oil is a member of the Mitsubishi UFJ Financial Group (MUFJ) keiretsu.

NOC employs over 5,500 people, with additional employees from oversea divisions, and operates the following refineries throughout Japan:

On 11 March 2011, a 145,000-barrel-per-day refinery in Sendai was set ablaze by the Tōhoku earthquake.[3] Workers were evacuated,[4] but tsunami warnings hindered efforts to extinguish the fire until 14 March, when officials planned to do so.[3] 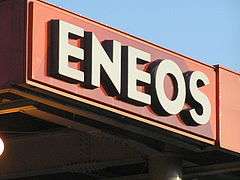 While developing the Rang Don Oil Field and Helang Gas Field NOEX, part of the Nippon Oil Corporation, conducted environmental impact assessments. These assessments helped them implement management plans based on the results of the assessments, specifically, how to reduce the impact of the fields on surrounding sea areas.[5]

In 2005 Nippon Oil and Ebara-Ballard announced they were going to start field testing a 1 kW household proton-exchange membrane fuel cell system that uses coal oil as fuel. It was the world's first household test with the system. The system achieves a greater power-generation efficiency than normal heating. The system can operate in temperatures as low as -10 deg C.[6]

In 2007 Nippon Oil was the recipient of the Nippon Keidanren Chairman’s Prize in recognition of its achievements in a number of areas. They were the first in the Japanese petroleum industry to achieve a zero emission status at their refineries. They are also developing fuel cell systems as well as producing and selling sulfur-free fuel. The Rang Dong Oil Field in also one of the biggest CO2 reduction projects in the world. The project utilizes associated gas produced along with crude oil for additional energy production.[7]

The construction of the Yetagun pipeline in Myanmar has been linked to 'severe human rights abuses' by Burmese troops. The company stated it 'was not aware of such abuses.' However critics claim that such foreign investment by Nippon Oil and other multinationals: 'provides a crucial source of support to the junta, allowing it to ignore demands that it return Burma to civilian rule and end human rights abuses.' 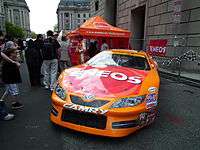 Nippon Oil was formerly a sponsor of the Honda Racing F1 Team and is a current sponsor of the F.C. Tokyo football club. It also sponsors other motor sports teams, such as Team Lexus LeMans ENEOS SC430 in the Japanese Super GT series in the GT500 class. In the late 1980s and early 1990s JSPC, it sponsored the Trust Racing Team Porsche.[8] More recently, the Eneos brand has been featured on Kyle Larson's #42 Chevrolet Camaro in the NASCAR Xfinity Series during the 2014, 2015, and 2016 season in select races. They also sponsor Akinori Ogata in the NASCAR Camping World Truck Series when he drives the 63 for MB Motorsports. He drove the 63 truck in 2015 and 2016.