The Battle of Hjörungavágr (Norwegian Slaget ved Hjørungavåg) is a semi-legendary naval battle that took place in the late 10th century between the Jarls of Lade and a Danish invasion fleet led by the fabled Jomsvikings. This battle played an important role in the struggle by Haakon Sigurdsson to unite his rule over Norway.

Haakon Sigurdsson ruled Norway as a vassal of King Harald Bluetooth of Denmark, but he was in reality an independent ruler. Haakon was a strong believer in the old Norse gods. When Harald Bluetooth attempted to force Christianity upon him around 975, Haakon broke his allegiance to Denmark. 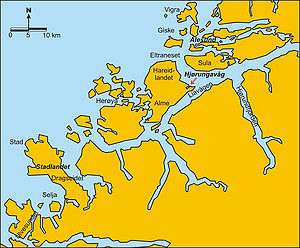 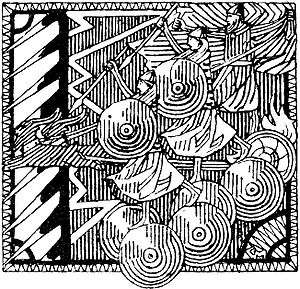 Storm in Hjørungavåg by Gerhard Munthe

The battle is described in the Norse kings' sagas—such as Heimskringla—as well as in Jómsvíkinga saga and Saxo Grammaticus' Gesta Danorum. Saxo Grammaticus estimated that the battle took place while Harald Bluetooth was still alive. Traditional has set the battle during the year 986. Those late literary accounts are fanciful but historians believe that they contain a kernel of truth.

Jómsvíkinga saga offers two mutually contradictory descriptions of the bay in which the battle took place. According to the first one, Hjorungavágr lies on the landward side of the island Hoð (now Hareidlandet, an island in Møre og Romsdal). According to the other, the bay is situated south of an island called Primsigð/Primsignd and north of an island called Horund. Both of these names are unknown today.[2]