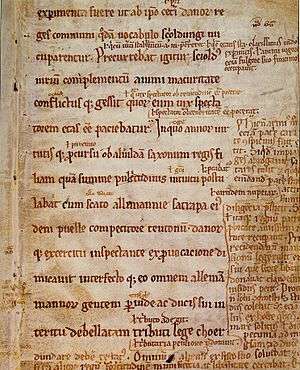 Gesta Danorum ("Deeds of the Danes") is a patriotic work of Danish history, by the 12th century author Saxo Grammaticus ("Saxo the Literate", literally "the Grammarian"). It is the most ambitious literary undertaking of medieval Denmark and is an essential source for the nation's early history. It is also one of the oldest known written documents about the history of Estonia and Latvia.

Consisting of sixteen books written in Latin on the invitation of Archbishop Absalon, Gesta Danorum describes Danish history and to some degree Scandinavian history in general, from prehistory to the late 12th century. In addition, Gesta Danorum offers singular reflections on European affairs in the High Middle Ages from a unique Scandinavian perspective, supplementing what has been handed down by historians from Western and Southern Europe.

The sixteen books, in prose with an occasional excursion into poetry, can be categorized into two parts: Books 1-9, which deal with Norse mythology, and Books 10-16, which deal with medieval history. Book 9 ends with Gorm the Old, the first factual documented King of Denmark. The last three books (14-16), which describe Danish conquests on the south shore of the Baltic Sea and wars against Slavic peoples (the Northern Crusades), are very valuable for the history of West Slavic tribes (Polabian Slavs, Pomeranians) and Slavic paganism. Book 14 contains a unique description of the temple at Rügen Island.

When exactly Gesta Danorum was written is the subject of numerous works; however, it is generally agreed that Gesta Danorum was not finished before 1208. The last event described in the last book (Book 16) is King Canute VI of Denmark subduing Pomerania under Duke Bogislaw I, in 1186. However the preface of the work, dictated to Archbishop Anders Sunesen, mentions the Danish conquest of the areas north of the Elbe river in 1208.

Book 14, comprising nearly one-quarter of the text of the entire work, ends with Absalon's appointment to Archbishop in 1178. Since this book is so large and Absalon has greater importance than King Valdemar I, this book may have been written first and comprised a work on its own. It is possible that Saxo then enlarged it with Books 15 and 16, telling the story of King Valdemar I's last years and King Canute VI's first years.

It is believed that Saxo then wrote Books 11, 12, and 13. Svend Aagesen's history of Denmark, Brevis Historia Regum Dacie (circa 1186), states that Saxo had decided to write about "The king-father and his sons," which would be King Sweyn Estridson, in Books 11, 12, and 13. He would later add the first ten books. This would also explain the 22 years between the last event described in the last book (Book 16) and the 1208 event described in the preface.

The original manuscripts of the work are lost, except for four fragments: the Angers Fragment, Lassen Fragment, Kall-Rasmussen Fragment and Plesner Fragment. The Angers Fragment is the biggest fragment, and the only one attested to be in Saxo’s own handwriting. The other ones are copies from ca. 1275. All four fragments are in the collection of the Danish Royal Library in Copenhagen, Denmark.

The text has, however, survived. In 1510-1512, Christiern Pedersen, a Danish translator working in Paris, searched Denmark high and low for an existing copy of Saxo’s works, which by that time was nearly all but lost. By that time most knowledge of Saxo’s work came from a summary located in Chronica Jutensis, from around 1342, called Compendium Saxonis. It is also in this summary that the name Gesta Danorum is found. The title Saxo himself used for his work is unknown.

Christiern Pedersen finally found a copy in the collection of Archbishop Birger Gunnersen of Lund, modern Sweden, which he gladly lent him. With the help of printer Jodocus Badius, Gesta Danorum was refined and printed. 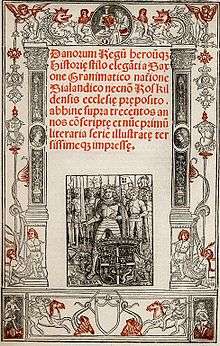 The first printed press publication and the oldest known complete text of Saxo’s works is Christiern Pedersen's Latin edition, printed and published by Jodocus Badius in Paris, France on 15 March 1514 under the title of Danorum Regum heroumque Historiae ("History of the Kings and heroes of the Danes"). The edition features the following colophon: ...impressit in inclyta Parrhisorum academia Iodocus Badius Ascensius Idibus Martiis. MDXIIII. Supputatione Romana. (the Ides of March, 1514).

The full front page reads (with abbreviations expanded) in Latin:

Histories of the Kings and heroes of the Danes, composed in elegant style by Saxo Grammaticus, a Sjællander and also provost of the church of Roskilde, over three hundred years ago, and now for the first time illustrated and printed correctly in a learned compilation.

The source of all existing translations and new editions is Christiern Pedersen's Latin Danorum Regum heroumque Historiae. There exist a number different translations today, some complete, some partial:

Gesta Danorum is also translated partially in other English, French and German releases.

Certain aspects of Gesta Danorum formed the basis for William Shakespeare's play, Hamlet. It is thought that Shakespeare never read Gesta Danorum, and instead had access to an auxiliary version of the tale describing the downfall of the Prince of Denmark, whose real name, Amleth, was used in anagram by Shakespeare for Hamlet.

Saxo’s version, told of in Books 3 and 4, is very similar to that of Shakespeare’s Hamlet. In Saxo's version, two brothers, Orvendil and Fengi are given the rule over Jutland by King Rørik Slyngebond of the Danes. Soon after, Orvendil marries King Rørik’s daughter, Geruth (Gertrude in Hamlet). Amleth is their first and only child.

Fengi becomes resentful of his brother’s marriage, and also wants sole leadership of Jutland, so therefore murders Orvendil. After a very brief period of mourning, Fengi marries Geruth, and declares himself sole leader of Jutland. Eventually, Amleth avenges his father’s murder and plans the murder of his uncle, making him the new and rightful King of Jutland. However, while Hamlet dies in Shakespeare's version just after his uncle's death, in Saxo's version Amleth survives and begins ruling his kingdom, going on to other adventures.

This article is issued from Wikipedia - version of the 5/21/2016. The text is available under the Creative Commons Attribution/Share Alike but additional terms may apply for the media files.