listen) (Møre and Romsdal) is a county in the northernmost part of Western Norway. It borders the counties of Sør-Trøndelag, Oppland and Sogn og Fjordane. The county administration is located in the city of Molde, while Ålesund is the largest city. The county is governed by the Møre og Romsdal County Municipality which includes an elected county council and a county mayor. The national government is represented by the county governor (currently Lodve Solholm). 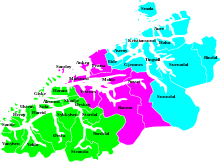 Map of the three districts in the county. Green is Sunnmøre, purple is Romsdal, and blue is Nordmøre.

For hundreds of years (1660-1919), the region was called Romsdalen amt, after the Romsdalen valley in the present-day Rauma Municipality. The Old Norse form of the name was Raumsdalr. The first element is the genitive case of a name Raumr, probably the old (uncompounded) name of the Romsdalsfjord, again derived from the name of the river Rauma, i.e. "The Dale of Rauma". Since the majority of the residents of the county lived in the Sunnmøre region, there was some controversy over the name. In 1919, many of the old county names were changed and this county was renamed Møre fylke.

The name Møre was chosen to represent the region where the majority of the county residents lived. That name is old (Old Norse: Mœrr) and it is probably derived from the word marr which means "ocean" or "sea". The meaning is then "coastal district". (There is also a coastal district in Sweden that has the same name: Möre.) The change in name from Romsdalen to Møre was controversial and it did not sit well with the residents of the Romsdal region. Finally in 1936, the name was changed again to a compromise name: Møre og Romsdal (English: Møre and Romsdal).

The coat-of-arms is from 1978. It shows three Viking ships (where the masts and the yards create three crosses). The number of three represents the three districts of the county: Sunnmøre, Romsdal and Nordmøre. 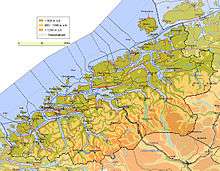 Map of the County

Traditionally, the county has been divided into three districts. From north to south, these are Nordmøre, Romsdal and Sunnmøre. Although the districts do not have separate governments and despite modern road, sea and air connections throughout the county, the three districts still have their own identities in many ways. Historically speaking, connections have been stronger between Nordmøre and Sør-Trøndelag to the north, Romsdal and Oppland to the east, and Sunnmøre and Sogn og Fjordane to the south, than internally. Differences in dialects between the three districts bear clear evidence of this. Due to geographical features, the county has many populated islands and is intersected by several deep fjords. Due to its difficult terrain, Møre og Romsdal has been very dependent on boat traffic, and its main car ferry company, MRF, has existed since 1921.

Møre og Romsdal has six settlements with city status. The largest three were cities before 1993 when municipalities were allowed to grant city status which led to an increase in the number of cities. The county contains multiple other urban settlements (as defined by Statistics Norway) without city status, every municipality except for Halsa and Smøla contain at least one. As of 1 January 2009, 166,374 people (66.8 percent of the population) lived in an urban settlement.[2] The population density is highest near the coast, with all of the county's cities located on saltwater.

The largest city in the county is Ålesund, with a population of 45,747 in the municipality and 49,528 in the agglomeration which it forms together with parts of Sula.

There is one railway, Raumabanen, which starts at Åndalsnes and connects to the main railway network of Norway. Public buses are operated by the county, using the brand name Fram.