She was the head of a professionally trained mercenary army, inherited from her European mercenary husband, Walter Reinhardt Sombre. This mercenary army consisted of Europeans and Indians. She is also regarded as the only Catholic ruler in India, as she ruled the Principality of Sardhana in 18th and 19th century India.[3][4]

She died immensely rich. Her inheritance was assessed as approximately 55.5 million gold marks in 1923 and 18 billion deutsch marks in 1953. Her inheritance continues to be disputed to this day.[5] An organisation named "Reinhards Erbengemeinschaft" still strives to resolve the inheritance issue.[6] During her lifetime she had converted to Christianity from Islam.[7] 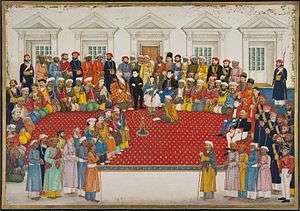 Begum Samru was of slight stature, fair complexion and distinguished by exceptional leadership abilities of an uncommon order. More than once, she headed her own troops in action. She was of Kashmiri descent.[8] When she was in her early teens, she married (or started living with) a mercenary soldier Walter Reinhardt Sombre of Luxembourg, who was operating in India. Walter Reinhardt Sombre, a European mercenary, then 45-year-old, came to the red light area and fell for the charms of Farzana, then a girl of 14, says Johan Lall in his "Begum Samru - Faded Portrait in a Gilded Frame".

A soldier of fortune, Sombre moved from Lucknow to Rohilkhand (near Bareilly), then to Agra, Deeg and Bharatpur and back to the Doab. Farzana helped him in those times of intrigue and counter-intrigue. Farzana was courted by some of the European officers who were associated with her husband. Among them were Le Vassoult, a Frenchman, and George Thomas, an Irishman. The Begum favoured the Frenchman and when, in 1793, the rumour spread that she had married him, her troops mutinied. The couple sought to escape secretly by night - Le Vassoult on horseback and the Begum in a palanquin. Misinformed that Le Vassoult had been shot, she stabbed herself but survived. Her lover, however, died of a self-inflicted wound to the head. One version has it that she suggested a suicide pact but only nicked herself when the unsuspecting Le Vassoult shot himself dead. When British General Lord Lake met the Begum in 1802, in a fit of enthusiasm he gave her a hearty kiss, which appalled her troops. But with her customary tact, Begum Samru pacified them by saying that it was only "the kiss of the Padre to a repentant child".[9]

The Begum, though only 4½ feet tall, wore a turban and rode on horseback as she led her troops to battle. So invincible did she seem that the superstitious spread the word that she was a witch who could destroy her enemies just by throwing her cloak towards them. Her army occupied the left of the Mahratta line at the battle of Assaye and hers was the only part of the Mahratta force that was not driven in disarray from the battle field. Having annihilated an advance by the 74th Highlanders and a picket detachment commanded by a Colonel Orrock, her army then withstood a cavalry charge from the Raj before marching from the field in good order.

Throughout her life, she had only one friend, Begum Umdaa, who belonged to the other Jagirdar Family of Sardhana became her closest friend with time and fulfilled her relation till her death with Begum Samru. Even after Begum Umdaa was married, Begum Samru took out time to visit her to Meerut in good and bad. On the death of her husband Walter Reinhardt, she succeeded to his Principality yielding about £90,000 per annum.

After the fall of Aligarh in September 1803, she was induced to surrender to Lord Lake and afterwards lived on good terms with the British, receiving visitors including the Bishop of Calcutta, Reginald Heber, Commander-in-Chief of the Indian Army Lord Combermere and Italian adventurer Jean-Baptiste Ventura.[9] Her conduct in the internal management of her estate was highly commendable. Over time, she became powerful, ruling over a large area from Sardhana, Uttar Pradesh. On 7 May 1781, aged around forty, Begum Samru was baptized Joanna Nobilis, by a Roman Catholic priest. She died at Sardhana in January 1837 at the age of 85, bequeathing the greater part of her property to David Ochterlony Dyce Sombre, who descended from Walter Reinhardt Sombre, from his first wife.[5] Several stories and novels have been written based on her political and diplomatic astuteness and on crucial battles fought by troops directly commanded by her.[10]

Palace at Sardhana and Chandni Chowk 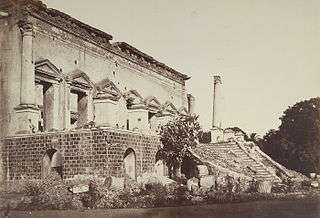 The palace built by her in Sardhana near Meerut was the centre of much activity during the reign of Mughal Emperor, Akbar Shah. Shah Alam II, the predecessor and father of Akbar Shah, regarded Begum Samru as his daughter. He did so because the Begum had saved Delhi from an invasion by a force of 30,000 Sikhs, under Baghel Singh in 1783. They had encamped at Tis Hazari (the name of the place being derived from the number of those who constituted the force, estimated at 30,000). Thanks to the Begum's parleys, the Sikhs did not enter the city and went back to Punjab after getting a generous monetary gift from Shah Alam.

In 1787(?), when the emperor, Shah Alam, blind and feeble, was in pursuit of Najaf Quli Khan and trying to quell the rebellion stirred up by him, an incident occurred at Gokalgarh that brought the Begum closer to Shah Alam. Seeing that the emperor's troops were wavering in their resolve to attack the rebel leader, she advanced with a force of 100 men and whatever big guns she had and opened fire on Najaf Quli Khan and his men. This did the trick and Najaf sought the Begum's help to make his peace with Shah Alam. Thankful for her intervention, the emperor bestowed special honours on her at the royal court and declared her to be "his most beloved daughter". Not only that, she was also confirmed in her estate at Sardhana, which was the subject of a dispute with Louis Balthazar alias Nawab Zafaryab Khan, another son of her late husband, General Sombre, by his first wife, Badi Bibi (senior wife).

Her palace in Chandni Chowk was built in a garden gifted by Akbar Shah, a later day mughal, to the Begum when he ascended the throne after the death of Shah Alam in 1806. Her palatial building still stands in Chandni Chowk, New Delhi. It is currently owned by the State Bank of India, Chandni Chowk Branch. Another palace that belonged to the Begum in Gurgaon has been completely lost to encroachment. Built in Islamic style, the ruins of this palace survived till about 2008 in Gurgaon.[11] There is a rumor that One of the sons of the Begum had been killed by the Begum herself, as he had some physical disorder due to which he couldn't get married to any lady. 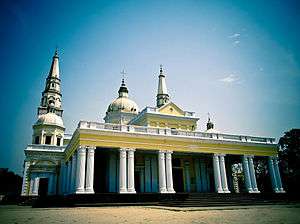 Begum Samru died at the age of 83 in 1836. Since the Begum was a Muslim before conversion, she was denied a burial at the Sardhana Church, but a monument for her tomb was allowed in her honour. Then her close friend Begum Umdaa who was born in the Jagirdar family of Sardhana and married to Zafte Khan, then Jagirdar of Meerut, gave land for her burial from her property, which is now situated near the NAS College, Meerut.

Her grandson, through her stepson, David Ochterlony Dyce Sombre, died in 1851 at London from where his body was brought to Sardhana and buried beside the Monument of Begum's Tomb in the imposing church she had built there. It is now known as the Basilica of Our Lady of Graces, and is the centre of two annual pilgrimages in March and November when thousands come to bless the Begum and pray to the Virgin Mary. Begum Samru set an astonishing example of feminism and religious freedom in her own person at a time when there was no public conception of these values.

The Begum of Samru also features as a prominent character in the novel Flashman and the Cobra by Robert Brightwell.[12]