For the name, see Begum (name). 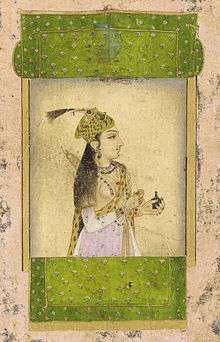 Begum, begam, baigum or beygum (Turkish: begüm, Persian: بیگم‎‎, Urdu: بیگم‎, Bengali: বেগম) is a female royal and aristocratic title from Central and South Asia. It is the feminine equivalent of the title baig or bey, which in Turkic languages means "higher official". It usually refers to the wife or daughter of a beg. The related form begzadi (daughter of a beg) also occurs.[1]

In South Asia, particularly in Punjab, Sindh, Hyderabad, Delhi, Khyber Pakhtunkhwa and Sylhet, begum has been adapted for use as an honorific for Muslim women of high social status or as a surname.

Some examples of women with the title of begum are:

Colloquially, the term is also used in India, Pakistan and Bangladesh by Muslim men to refer to their own wives or as an honorific address to a married or widowed woman.

The term became well known in the West, especially in the French-speaking world, due to Jules Verne's 1879 novel The Begum's Millions.

The term had earlier become known in Great Britain during the impeachment and Parliamentary trial of Warren Hastings, former Governor-General of India, which lasted from 1787 until 1795. One of the major charges against Hastings was that he had unjustly confiscated land belonging to the "Begums of Oudh" (the mother and grandmother of Asaf-Ud-Dowlah, Nawab of Oudh).

Begumpet is one of the major commercial and residential suburbs of the city of Hyderabad, India. Begumpet stands on land given by the sixth Nizam of Hyderabad to his daughter as her wedding present when she married a Paigah noble.

Mississauga, Ontario, Canada, a suburb of Toronto, is referred as Begumpura ("Ladies' Town") by members of the Pakistani community of Toronto. Mississauga has a large Pakistani immigrant community and many husbands work in the Persian Gulf and Saudi Arabia while their wives and children live in Mississauga.[3]