Sardhana is a town and a municipal board in Meerut district in the Indian state of Uttar Pradesh. It is located 85 km (53 mi) northeast of New Delhi, and 13 mi from Meerut. Sardhana is famous for its cloth industry and Church.

The name is derived from Saradhana, a branch of Gurjars.

Being close to Hastinapur, which is also in Meerut district, the capital of Kauravas of Mahabharata, Sardhana is also known for the ancient Mahadev Temple that is believed to be dating from the Mahabharata period. It was here that the Pandavas prayed before leaving for the Lakshagrah, the notorious palace made of lac by Duryodhana, at the confluence of the Hindon and Krishna rivers (Kali River, Kali Nadi). This palace was located at Varnavrat, the present Barnava, where the prince resided with their mother Kunti.[1]

In the 19th century, Sardhana was the capital of the Begum Samru, born as Farzana Zebunisa in 1751, and considered to be the only Catholic ruler in India. She married in her early teens, a mercenary soldier Walter Reinhardt Sombre of Luxembourg, who was operating in India. Samru is but a mispronunciation of his surname Sombre. On his death in 1778 she succeeded to the command of his mercenary troops, and subsequently converted to Catholicism in 1781, under the name Johanna.[2][3][4]

During her lifetime she supported financially many charitable and religious institutions. She also obtained from the Holy See, the promotion of Father Giulio Cesare, one of the members of the Agra Mission, to the episcopal dignity, and later Pope Gregory XVI wrote to her, and sent her tokens of his paternal approbation.[3][5] The church she built in 1822, became a cathedral for a short time, with its own bishop. The Bishop's Palace has become a girls school. Her original palace has now become a seminary for training priests. The New Palace has become the boys school. In December 1961, Pope John XXIII conferred the dignity of Minor Basilica to the church, now known as Basilica of Our Lady of Graces. This dignity is given only on churches that are both beautiful and historically famous.[6]

Amjad Ali Shah and his advisers 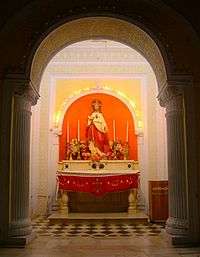 Interior of the 'Basilica of Our Lady of Graces', Sardhana.

There is called a mahapanchayat (great council) of 40 villages on 29 September 2013 to protest against the Uttar Pradesh government charging the local BJP MLA Sangeet Singh Som under the stringent National Security Act AT KHERA. The crowd becomes violent when the police began to brandish sticks. The situation turned tense when a rumour spread that a youth injured in police action had died. Crowd set fire police jeeps and other vehicles.[8]