Bekasi (Indonesian: Kota Bekasi) is a city in West Java, Indonesia, located on the eastern border of Jakarta within the Jabodetabek metropolitan region, as such it serves as a dormitory and factory city for Jakarta. The borders for this city are Bekasi Regency at the north, Bogor Regency and Depok City at the south, at the west is East Jakarta, at the east is Bekasi Regency. It is Indonesia's most populated incorporated city, and one of the most populated worldwide, but still trails the likes of Incheon and Yokohama. The large number of multinational companies, has apparently attracted a lot of expatriates (mainly Japanese and Korean) to settle in Bekasi.[2]

Many middle-up satellite cities have been developed in Bekasi,[5] complete with their own shopping malls, schools, club houses, water park, and shuttle bus services to central Jakarta. Substantial urban areas surround the city. It serves as a commuter city for Jakarta, although it has notable trade, business and processing industries. These are primarily clustered in the area of Cikarang.

Bekasi is one of the oldest cities in Indonesia, and has a history of being the capital city of the Kingdom of Tarumanagara. At that time, the name of Bekasi was Dayeuh Sundasembawa. The earliest evidence of its existence dates from the 5th century according to the Tugu inscription.[6] 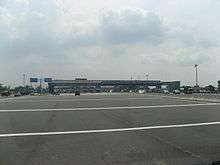 Bekasi is connected by the Trans-Java Highway, the main road across Java. There are two highway connections from the Jabodetabek urban area. The first is the Jakarta–Cikampek Toll Road, which has four exits in Bekasi. The other is the Jakarta Outer Ring Road, which provides access to Tangerang, Jakarta, and Bogor.

Owing to its location as a satellite city of Jakarta, heavy rush hour traffic jams have become common on the roads between East Jakarta and Bekasi. Efforts have been made to overcome these problems, mainly by widening the roads between Sumber Arta and Bekasi Cyber Park along the Kalimalang river. The most recent traffic project is the constructing Becakayu toll road, which will be an alternate to the Jakarta-Cikampek Toll Road.[8] Its route will be West Bekasi-Cawang-Kampung Melayu.

Damri shuttle bus service is available from the Soekarno-Hatta Airport to Kayuringin, Harapan Indah, and Summarecon Bekasi. Taxis are widely available. The primary means of public transportation is by minibus, called Koasi. They serve certain routes throughout the city.

The main bus terminal is Terminal Bekasi (located in East Bekasi). The other terminal are Pondok Gede and Kayuringin.

In addition to its numerous residential areas, there are several important industrial areas in the outskirt of Bekasi. These include the Jababeka, MM 2100, Bekasi International Industrial Estate (BIIE), Delta Silicon Industrial Park, and East Jakarta Industrial Park (EJIP) districts. Many large companies, such as Honda, LG, Converse and Samsung, have factories in Bekasi. Nowadays some 4,000 companies are operating in Bekasi and surrounding areas. It is estimated that approximately 1,000 expatriate workers[12] and over 500,000 laborers are working in the area.

Hankook Tire of South Korea is building a US$353 million tire plant in Bekasi and started of production in 2014.[13]

The latest official (2014) of Bekasi population was 2,663,011, giving a density of 11,900/km2 (31,000/sq mi). Bekasi is inhabited by many different ethnic groups, mostly Betawi and Javanese descent. Sundanese are the largest minority as well as other minorities include Minangkabau, Bataks, and Chinese.

Most citizens in Bekasi adhere to Islam. Other religions include Christianity (Roman Catholicism and Protestanism), Hinduism, Buddhism, and Confucianism. 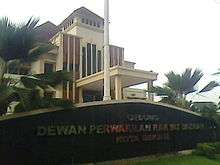