For the regency of the same name, see Tangerang Regency.

Tangerang is a city in the Province of Banten, Indonesia. It is located about 25 kilometres (16 miles) west of Jakarta. It is the third largest urban centre in the Jabotabek region after Jakarta and Bekasi, now the sixth largest city in the nation and also the largest city in Banten province. It has an area of 164.54 square kilometres (63.53 square miles) and an official 2010 Census population of 1,797,715,[2] increasing to 2,001,925 as at 2014[1] - making it the eighth most populated suburb in the world at the latter date.

Tangerang, along with South Tangerang is the place where many giant developers built up the satellite city such as BSD City, Gading Serpong, Alam Sutera, and Lippo Village in Tangerang which is now become the Indonesia's property barometer.

Tangerang is home for Soekarno–Hatta International Airport which serves metropolitan Jakarta and as the Indonesia's main gateway, Indonesia Convention Exhibition which is the biggest convention and exhibition centre in Indonesia which is opened in 2015.

Tangerang is an industrial and manufacturing hub on Java and is home to over 1,000 factories. Many international corporations have plants in the city. Tangerang tends to be hot and humid, with little in the way of trees or geographical features. Certain areas consist of swamps, including the areas near the Soekarno–Hatta International Airport.

In recent years the urban expansion of Jakarta has covered Tangerang, and as a result many of its residents commute to Jakarta for work, or vice versa. Many high-class and middle-class satellite cities have been developed in Tangerang, complete with their own shopping malls, private schools and convenience centers. The government is working on expanding the highway system to accommodate more traffic flow to and from the area.

Tangerang is also the corporation's alternative to move or built their office from Jakarta due to the heavy traffic and crowd such as Unilever Indonesia that move their head from Gatot Subroto, Jakarta to BSD City. 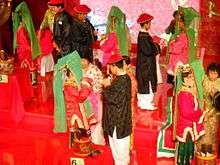 Cina Benteng of Tangerang are uniquely the only Chinese community in Indonesia with significant Tungusic people of Eastern Siberia Manchurian ancestry.

Tangerang also has a significant community of Chinese Indonesians, many of whom are of Cina Benteng extraction. Benteng means 'fortress' in Indonesian. They were descended from Manchu laborers who were brought there by the Dutch colonials in the 18th and 19th centuries. They are culturally distinct from other Chinese communities in the area: while almost none speak any dialect of Chinese, they are culturally very strongly Daoist and maintain their own places of worship and community centers. They are ethnically mixed. A large Chinese cemetery is also located in Tangerang, much of which has now been developed into modern suburban communities such as Gading Serpong, Alam Sutera and BSD City.

Most of the Chinatown of Tangerang is located at Sewan, Pasar Lama, Pasar Baru, Benteng Makasar, Kapling, Karawaci (not Lippo Karawaci). One can find any food and all things Chinese there. Lippo Karawaci, Bintaro Jaya, Bumi Serpong Damai and Alam Sutera are new locations of residential places (New Towns). A vast majority of the residents are newcomers from Jakarta or outside, not genuine Benteng Chinese. 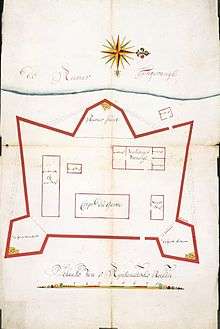 In October 1945, Laskar Hitam, a Muslim militia was established in Tangerang. The goal of this movement was to establish an Islamic nation in Indonesia. This movement later became a part of DI/TII rebel group. On October 31, 1945, Laskar Hitam kidnapped Otto Iskandardinata, Republic of Indonesia's Minister of State. He was presumed to have been murdered at Mauk beach, Tangerang on December 20, 1945.

Tangerang city was formed as an autonomous city on 27 February 1993 out of the Tangerang Regency. The city was previously an administrative city within that Regency.

In August 1996, Walmart, the largest retail group in USA, opened its first branch in Lippo Karawaci, Tangerang. The branch was ransacked and burned down during the Indonesian riots of May 1998. Walmart discontinued their investment in Indonesia after the riot.

Tangerang District is the location of the Situ Gintung reservoir built by the Dutch colonial authorities in 1933. It was surrounded by a dam up to 16 metres (52 ft) high, which failed on 27 March 2009 with the resulting floods killing at least 93 people.[3]

Besides of Boen Tek Bio Temple, the Benteng Heritage Museum are built by Udaya. It is opened on the auspicious November 11, 2011 or 11/11/11 and enriched the Chinese heritage.[4]

The city of Tangerang is divided into thirteen districts (kecamatan), tabulated below with their 2010 Census population.

South Tangerang (Tangerang Selatan) is a city which, like Tangerang city itself, is administratively separate from Tangerang Regency. It is subdivided into seven districts, which are Serpong, Serpong Utara (North Serpong), Ciputat, Ciputat Timur (East Ciputat), Pondok Aren, Pamulang, and Setu. Located on the southwest of Jakarta, it has an area of 147.19 square kilometres and a population of 1,303,569 at the 2010 Census.[6]

Tangerang provides educational facilities from kindergarten to college. BSD City is the pioneer of Tangerang's first educational centre called EduTown which is now consist of 2 universities. In addition to government schools founded by there are many private schools and colleges. Among these are Sekolah Santa Ursula BSD,[7] Santa Laurensia School,[8] BPK Penabur Gading Serpong, [9] and IPEKA Plus BSD Christian School.

Tangerang is home for international education and universities such as :

Tangerang's economy depends highly on service sectors, trading, financial service, and industrial. Jatake, which is the Tangerang's biggest industrial area is home for over 1.000 industrial corporation.

As the impact of Jakarta's growing economy, Tangerang has become an alternative for some corporation to build their offices here due to the crowded and the land price's are getting expensive. Jl. Pahlawan Seribu and Jl. Kapten Soebianto Djojohadjikusumo which is both in BSD City are the central business district for both Tangerang city and South Tangerang as well. Here, hundreds of shophouses and several important branch office and headquarters are located here.

Due to the massive development that giant developers and urbanization to Greater Tangerang, Serpong has become the Indonesia's property barometer because of the real estate that been developed here.

A mall at Alam Sutera. 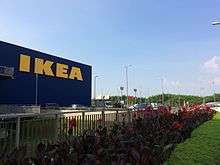 Tangerang's is the home for shopping in Banten area. Numerous shopping centre and market are available here. The largest shopping mall in Tangerang and Banten is Supermall Karawaci located in Lippo Village which provides H&M, Debenhams, and more. The most popular is AEON Mall BSD City which is opened in May 2015 as the first AEON mall in Indonesia which provides AEON Store, high-street brands such as H&M and Uniqlo. Mall @ Alam Sutera is the upper-middle class shopping mall which is consist of high-street brands such as Cotton On, New Look, Dorothy Perkins and Sogo Department Store along with TheFoodhall Supermarket (part of PT. Panen Lestari Internusa). Another popular destinations are Summarecon Mall Serpong, The Breeze BSD City (open-air mall), Living World Alam Sutera, TangCity Mall, TerasKota, and The Hu6 (Balekota). 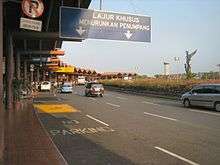 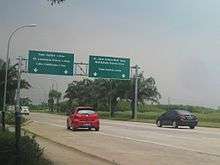 The main road in Alam Sutera.

Apart from using buses and public transport, there are several taxi companies operating in the city, such as the express taxi, blue bird, and the local operator Arimbi.

Soekarno-Hatta International Airport is the main hub for air transport in Jakarta Metropolitan Area as well as Tangerang. Air Conditioned public bus shuttle is available from the Airport to several destinations inside Jakarta. This is operated by Damri a state owned company.

There are also private shuttle bus services from Jakarta to private residential area such as Lippo Karawaci and Citra Raya.

There are 17 intersections prone to traffic congestion with the obsolete Multi Program Eight Phase System. By 2012, Tangerang will have a new technology, called the Intelligent Transport System (ITS) uses a closed-circuit camera that would respond to traffic conditions at any given intersection and could reduce the rate of congestion by 30 percent.[10]

Tangerang is twinned with: