For other historical figures with similar names, see Berengar. 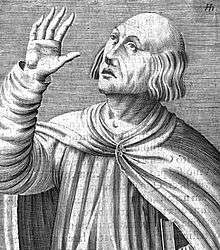 Berengar of Tours (c. 999 – 6 January 1088) was a French 11th century Christian theologian and Archdeacon of Angers, a scholar whose leadership of the cathedral school at Chartres set an example of intellectual inquiry through the revived tools of dialectic that was soon followed at cathedral schools of Laon and Paris, and who disputed with the Church leadership over the doctrine of transubstantiation in the Eucharist.

Berengar of Tours was born perhaps at Tours, probably in the early years of the 11th century. His education began in the school of Bishop Fulbert of Chartres, who represented the traditional theology of the early Middle Ages, but did not succeed in imparting it to his pupil. Berengar was less attracted by pure theology than by secular learning, and brought away a knowledge of Latin literature, dialectic, and a general knowledge and freedom of thought surprising for his age. Later he paid more attention to the Bible and early Christian writers, especially Gregory of Tours and Augustine of Hippo; and thus he came to formal theology.

Returning to Tours, he became a canon of the cathedral and in about 1040 became head of its school, improving its efficiency and attracting students from far and near. He acquired his fame as much from his blameless and ascetic life as from the success of his teaching. His reputation was such that a number of monks requested him to write a book to kindle their zeal; and his letter to Joscelin, later archbishop of Bordeaux, who had asked him to decide a dispute between Bishop Isembert of Poitiers and his chapter, is evidence of the authority attributed to his judgment. He became archdeacon of Angers, and enjoyed the confidence of not a few bishops and of the powerful Count Geoffrey of Anjou.

Amid this chorus of praise, a discordant voice began to be heard; it was asserted that Berengar held heretical views on the Eucharist. The first controversies on the nature of the Eucharistic Presence date from the earlier Middle Ages. In the ninth century Paschasius Radbertus claimed that Christ's Eucharistic body was identical with his body in heaven, but he won practically no support.[1] His doctrine was sharply attacked by Ratramnus and Rabanus Maurus, who opposed his emphatic realism, which was sometimes marred by unfortunate comparisons and illustrations, and proposed a more spiritual conception of the Divine presence.[2] As for Berengar, by one account, "Considerably greater stir was provoked ... by the teaching of Berengar, who opposed the doctrine of the Real Presence."[3] But in reality, there are diverse opinions among theologians and historians on this point, and it is not clear that Berengar actually denies the Real Presence, though he does deny transubstantiation.[4]

The first to take formal notice of this was his former fellow student Adelmann, who begged him to abandon his opposition to the Church's teaching.

Probably in the early part of 1050, Berengar addressed a letter to Lanfranc, then prior of Bec Abbey in Normandy, in which he expressed his regret that Lanfranc adhered to the Eucharistic teaching of Paschasius and considered the treatise of Ratramnus on the subject (which Berengar supposed to have been written by Johannes Scotus Eriugena) to be heretical. He declared his own agreement with Eriugena, and believed himself to be supported by Saint Ambrose, Saint Jerome, Augustine, and other authorities. This letter was received by Lanfranc in Rome, where it was read before a council and Berengar's view was condemned. Berengar was summoned to appear at another council to be held at Vercelli in September. Berengar sought permission to go to the council from King Henry I of France, in his capacity as nominal abbot of St. Martin at Tours. Instead, for unclear reasons, the king imprisoned him. The council at Vercelli examined Berengar's doctrine and again condemned it.

On his release from prison, probably effected by the influence of Geoffrey of Anjou, the king still pursued him, and called a synod to meet in Paris in October 1051. Berengar, fearing its purpose, avoided appearing, and the king's threats after its session had no effect, since Berengar was sheltered by Geoffrey and by Bishop Eusebius of Angers, and found numerous partisans among less prominent people.

In 1054, Cardinal Hildebrand came to France as papal legate. At first he showed himself friendly to Berengar, and talked of taking him back to Rome to get Leo IX's authority with which to silence his foes. But when he found that the latter could do more to disturb the peace of the Church than Berengar's friends, he drew back.

Under these circumstances Berengar decided to concede as much as he could, and the French bishops showed that they wished a speedy settlement of the controversy, when the Synod of Tours declared itself satisfied by Berengar's written declaration that the sacramental bread and wine after consecration were the body and blood of Christ. The same desire for peace and the death of Pope Leo (April 19) were reasons why Hildebrand did not press for Berengar's going to Rome at once.

In 1059, Berengar went to Rome, fortified by a letter of commendation from Count Geoffrey to Hildebrand. At a council held in the Lateran, he could get no hearing, and a formula representing what seemed to him the most carnal view of the sacrament was offered for his acceptance. Overwhelmed by the forces against him, he took this document in his hand and threw himself on the ground in the silence of apparent submission.

Berengar returned to France full of remorse for this desertion of his faith and of bitterness against the pope and his opponents; his friends were growing fewer—Geoffrey was dead and his successor hostile. Eusebius Bruno was gradually withdrawing from him. Rome, however, was disposed to give him a chance; Pope Alexander II wrote him an encouraging letter, at the same time warning him to give no further offence.

He was still firm in his convictions, and in about 1069 he published a treatise in which he gave vent to his resentment against Pope Nicholas II and his antagonists in the Roman council. Lanfranc answered it, and Berengar rejoined. Bishop Hugo of Langres also wrote a treatise, De corpore et sanguine Christi, against Berengar. Even the eponymous Berengar, Bishop of Venosa, was drawn into the quarrel and wrote against him at Rome in the years of his second summons there.

But the feeling against him in France was growing so hostile that it almost came to open violence at the Synod of Poitiers in 1076. Hildebrand, now Pope Gregory VII, tried yet to save him; he summoned him once more to Rome (1078), and undertook to silence his enemies by getting him to assent to a vague formula, something like the one which he had signed at Tours. But Berengar's enemies were not satisfied, and three months later at another synod they forced on him a formula which could mean nothing but what was later called transubstantiation, except by utterly indefensible sophistry. He was indiscreet enough to claim the sympathy of Gregory VII, who commanded him to acknowledge his errors and to pursue them no further. Berengar confessed that he had erred, and was sent home.

Once back in France, he published his own account of the proceedings in Rome, retracting his recantation. The consequence was another trial before a synod at Bordeaux (1080), and another recantation.

After this he kept silence, retiring to the island of Saint-Cosme near Tours to live in ascetic solitude. It was there that he died, in union with the Church.

Selection from his 1059 confession

"...the bread and wine which are placed on the altar are after consecration not only a sacrament but also the true body and blood of our Lord Jesus Christ, and with the senses not only sacramentally but in truth are taken and broken by the hands of the priests and crushed by the teeth of the faithful."[5]

Text of his 1079 confession

"I, Berengarius, believe in my heart and openly profess that the bread and wine that are placed on the altar are through the mystery of the sacred prayer and the words of our Redeemer substantially changed into the true and proper life-giving flesh and blood of Jesus Christ our Lord; and that after the consecration is the true body of Christ, which was born of the Virgin, as an offering for the salvation of the world hung on the cross, and sits at the right hand of the Father; and (is) the true blood of Christ which flowed from his side; not only through the sign and power of the sacrament but in his proper nature and true substance; as it is set down in this summary and as I read it and you understand it. Thus I believe, and I will not teach any more against this faith. So help me God and this holy Gospel of God."[6]

Arguably, Berengar's significance for the development of medieval theology lies in the fact that he asserted the rights of dialectic in theology more definitely than most of his contemporaries. There are propositions in his writings which can be understood in a purely rationalistic sense. But it would be going too far to see rationalism as Berengar's standpoint, to attribute to him the intention of subverting all religious authority — Scripture, the Fathers, popes, and councils.

Berengar's position was never diametrically opposed to that of his critics. But the controversy that he aroused forced people to reconsider the ninth-century discussion of the Eucharist, as Paschasius Radbertus had left it, and to clarify the doctrine of transubstantiation. Further, when both Berengar and his critics used the secular disciplines of logic and grammar to express a matter of Christian doctrine, the way was open to the scholasticism of the twelfth century.[7]