Bhumihar is a Hindu caste native to East India. They are mainly found in Bihar, the Purvanchal region of Uttar Pradesh, Jharkhand, Bengal, the Bundelkhand region of Madhya Pradesh, and Nepal.[2] There is also a significant migrant population of Bhumihars in Mauritius,[3] Suriname, Trinidad & Tobago and Guyana.

The Bhumihars claim Brahmin status, and are also referred to as Bhumihar Brahmin.[4] In Bihar, they are also known as Babhan[5] and they have also been called Bhuinhar.[6]

The Bhumihars were a prominent land-owning group of eastern India until the 20th century, and controlled nine small princely states in the region. The Bhumihar community played an important role in the peasant movements of India, and was highly influential in politics of Bihar in the 20th century.

The word Bhumihar is of relatively recent origin, first used in the records of United Provinces of Agra and Oudh in 1865. It derives from the word bhoomi ("land"), referring to the caste's landowner status. The term Bhumihar Brahmin was adopted by the community in the late-19th century to emphasise their claim of belonging to the priestly Brahmin class.[7] The alternate name "Babhan" has been described as a distorted colloquial term for "Brahmin".[8]

As with many castes in India, there are numerous myths regarding the origins of the Bhumihar community. One legend claims that their ancestors were Brahmins who were set up to take the place of the Kshatriyas slain by Parashurama but some non-Bhumihars have implied that they are the mixed-race offspring of Brahmin men and Kshatriya women.[9] Other legends state that they are the offspring of a union between Rajput men and Brahmin women, or that they derive from Brahman-Buddhists who lost their high position in Hindu society. The Bhumihars themselves dislike these narratives involving "hybridity" or "fallen status", and claim to be pure Brahmins.[7] 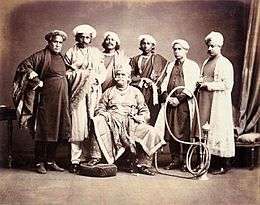 Ruler of the Benares State in 1870s

By the 16th century, the Bhumihars controlled vast stretches of land in eastern India, particularly in north Bihar. By the late eighteenth century, along with Bihari Rajputs, they had established themselves as the most prominent landholders of the region.[10] Oral legends suggest that along with Muslims and Rajputs, they displaced the Bhar and Chero natives of the region.[11] The weakening of the Mughal suzerainty over the region gave rise to several small Bhumihar states. For example, the revenue contractors for the Mughal province of Awadh declared themselves the Maharaja of Benares. They successfully defended their independence against the Nawab of Awadh in the 1750s and 1760s, before becoming a British dependency.[12] Other princely states and fiefdoms ruled by Bhumihars included Bettia, Tekari, Hathwa, Tamukhi, Sheohar, Mahishadal, Pakur and Maheshpur.[9]

The distinctive Bhumihar caste identity was largely created through military service.[13] During early days of British expansion in India, a large number of Bhumihars participated in battles and revolts against the East India Company.[14] The Company also recruited Bhumihar sepoys in large numbers.[15]

Bhumihars claim to be descendants of Brahmins who held land grants, a theory supported by scholars such as Jogendra Nath Bhattacharya.[9] However, other communities did not give them the ritual status of Brahmins, as most of them were cultivators during the British Raj.[4] Some of the early censuses of British India categorised Bhumihars as Shudras, the lowest of the four varnas. This was considered insulting, especially since several zamindars (land-owning aristocrats) were Bhumihars.[16]

Like many other aspirational castes, the Bhumihars followed the process of sanskritisation to achieve their end. The Bhumihar zamindars and princely state rulers established caste-based associations (sabhas) to form a community network and to advance their claims to Brahmin status. The Pradhan Bhumihar Brahman Sabha ("Chief Assembly of Bhumihar Brahmins") was established in Patna in 1889. Its objective was "to improve moral, social and educational reforms of the community and to represent the wants of the community to the government".[17] The Bhumihar Brahmin Mahasabha ("great assembly") was established in 1896.[18] The local Bhumihar Brahmin Sabhas included the ones at Muzaffarapur (1899), Patna (1899), Gaya (1900) and Saran (1908).[19] These associations filed numerous petitions to be classified as Brahmins in the 1901 census report. Edward Albert Gait, the author of the census report, stated that the Bhumihars did not remain Brahmins, although there was evidence favouring their Brahmin origin. He wrote that the general Hindu public considered them a separate caste, which is "generally, but not always, regarded as slightly superior" to the Rajput Kshatriyas.[20] Herbert Hope Risley, the Census Commissioner of British India, believed them to be an offshoot of the Rajputs.[9] Persistent pressure from the Mahasabha, who glorified the history of the community, led to official recognition of the Bhumihars as Brahmins in the later Raj censuses. According to Ashwani Kumar, the Bhumihar claim to Brahmin status means that today "unlike other upper castes, [they] guard the local caste hierarchy more zealously for they perpetually feel the pressure of being dislocated and discredited in the topsy-turvy world of caste."[7]

Besides campaigning for the Brahmin status, the caste associations also played an important role in general welfare of the community. In 1899, the Bhumihar Brahmin Mahasabha, with financial aid from a zamindar, established a college at Muzaffarpur. This was accredited to award degrees in the following year and it was a significant development because education in the area was improving rapidly but students desirous of furthering it had to travel to Bhagalpur, Calcutta or Patna. By 1920, 10 per cent of Bhumihars in Bihar were literate, making them one of the few literate castes; in this achievement, however, they were well behind the Kayasthas (33 per cent) and some other groups.[21] In the first half of the 20th century, the Bhumihars suffered increasing economic hardships due to the steady fragmentation of land rights among heirs and the decline in agricultural prices during the Great Depression. During this period, the Bhumihar associations served as community networks that facilitated access to English education and urban employment.[16] As with the Rajputs, Kayasthas and other high castes of Bihar — and as opposed to the methods used by most lower castes — neither the Mahasabha nor any other formal body exercised power to make and enforce caste rules.[22]

Being traditional landlords and one of the early literate castes, the Bhumihars have been influential in the politics of Bihar since the British days. Noted Bhumihar princely state rulers included Harendra Kishore Singh (Raja of Bettiah) and Vibhuti Narayan Singh (Raja of the Benares).

The Bhumihars played a pioneering role in organizing peasant, leftist and independence movements since 1910s.[24] In 1914 and 1916, the Bhumihars of Pipra and Turkaulia revolted against indigo cultivation.[25] When Mahatma Gandhi launched satyagraha against indigo cultivation in Motihari in 1917, a number of Bhumihar intellectuals joined the protest. These included Krishna Singh (or Sinha), Ram Dayalu Singh, Ramnandan Mishra, Shilbhadra Yaji, Karyanand Sharma and Sahajanand Saraswati.[26]

While a section of Bhumihars were landowners, the vast majority belonged to tenantry. Starting in 1914, two factions emerged in the Bhumihar Mahasabha: the landowner-dominated faction led by Ganesh Dutt, and the tenant-dominated faction led by Sahajanand Saraswati. Sahajanand came from a zamindar family, which had been reduced to tenant status. He attracted a large number of followers who, as tenants, were exploited by the rich landlords. His support for the non-cooperation movement also alarmed the landlords, who were loyal to the British colonial administration. The growing differences between the two factions resulted in a split in the Mahasabha, in 1925-26. Sahajanand established an ashram at Bihta, which started attracting tenants and peasants from other castes as well. When the rich Bhumihar landlords stopped supporting Sahajanand's activities, he declared that caste associations were a means to continue their supremacy.[4] He established a caste-agnostic peasants movement, which later evolved into All India Kisan Sabha. In Bihar, Kisan Sabha, as well as the Communist Party of India (which was heavily inspired by Kisan Sabha), were identified as Bhumihar-dominated organizations for years.[16]

After Sahajanand gave up caste politics, Ganesh Dutt emerged as the leader of Bhumihar Mahasabha. He later entered the Legislative Council, and distributed patronage to other members of his caste. This patronage was extended further, when Krishna Singh, a Bhumihar, became the Premier and Chief Minister of Bihar.[27] His tenure saw the rise of a number of influential Bhumihar leaders including Mahesh Prasad Sinha, Krishnakant Singh, LP Shahi, Basawan Sinha, and Kailashpati Mishra.[28] Singh also worked for the welfare of the lower castes. He was the first chief minister in India to abolish the zamindari system.[24] He also led Dalits' entry into Baidyanath Temple.[1]

As their power in the electoral politics declined, a number of Bhumihars were attracted to Ranvir Sena, a private militia established in 1994.[28] The group has carried out armed operations against the Naxals in the region, and has been involved in atrocities against the lower castes, such as the Laxmanpur Bathe massacre.[30]

Influence in other fields

The Bhumihars follow a subset of the Brahmin rituals, and claim to be "tri-karma" Brahmins.[5] The Christian missionary M. A. Sherring wrote in 1872 that the Bhumihars performed only three of the six prescribed Brahmanical duties: "They give alms, but do not receive them; they offer sacrifices to their idols, but do not perform the duties and offices of a priesthood; they read the sacred writings, but do not teach them."[32]

Some Bhumihars in Muzaffarpur trace their lineage to Husseini Brahmins, and participate in the Muharram processions.[33] The Bhumihars outside Purvanchal-Bihar region may follow the respective local customs and traditions. For example, in Chandipur village of Murshidabad district (West Bengal), a section of Bhumihars became the landlords after death of the British indigo plantation owners. They are now "thoroughly Bengali": they worship Kali as their primary deity, and are regarded as Brahmins by others in the village.[34]

Bhumihars use the same surnames as those of north Indian Brahmins as well as some surnames in common with Rajputs.[9] In Bihar, the Bhumihars started using the surname Sharma and the title Pandit in the 20th century.[35] Other common traditional Brahmin surnames used by the Bhumihars include Mishra, Dikshit, Tivan, Patak, Pande and Upadhyaya.[36] It is also common for Bhumihars to affix Singh (usually identified with Kshatriyas, especially Rajputs) to their name.[37][36]