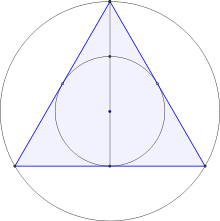 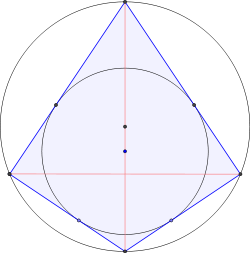 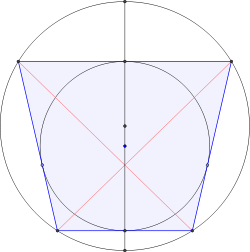 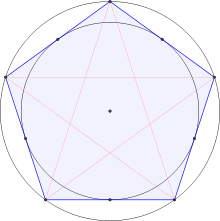 In geometry, a bicentric polygon is a tangential polygon (a polygon all of whose sides are tangent to an inner incircle) which is also cyclic — that is, inscribed in an outer circle that passes through each vertex of the polygon. All triangles and all regular polygons are bicentric. On the other hand, a rectangle with unequal sides is not bicentric, because no circle can be tangent to all four sides.

Every triangle is bicentric.[1] In a triangle, the radii r and R of the incircle and circumcircle respectively are related by the equation

where x is the distance between the centers of the circles.[2] This is one version of Euler's triangle formula.

Not all quadrilaterals are bicentric (having both an incircle and a circumcircle). Given two circles (one within the other) with radii R and r where

, there exists a convex quadrilateral inscribed in one of them and tangent to the other if and only if their radii satisfy

where x is the distance between their centers.[2][3] This condition (and analogous conditions for higher order polygons) is known as Fuss' theorem.[4]

A complicated general formula is known for any number n of sides for the relation among the circumradius R, the inradius r, and the distance x between the circumcenter and the incenter.[5] Some of these for specific n are:

For any regular polygon, the relations between the common edge length a, the radius r of the incircle, and the radius R of the circumcircle are:

For some regular polygons which can be constructed with compass and ruler, we have the following algebraic formulas for these relations:

Thus we have the following decimal approximations: