In mathematics, an algebraic expression is an expression built up from integer constants, variables, and the algebraic operations (addition, subtraction, multiplication, division and exponentiation by an exponent that is a rational number).[1] For example,

is an algebraic expression. Since taking the square root is the same as raising to the power

is also an algebraic expression. By contrast, transcendental numbers like π and e are not algebraic.

is a rational expression, whereas

are set equal to each other. These expressions obey the same rules as fractions. The equations can be solved by cross-multiplying. Division by zero is undefined, so that a solution causing formal division by zero is rejected.

Algebra has its own terminology to describe parts of an expression: 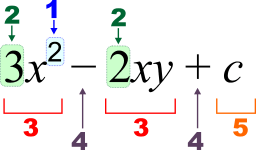 In roots of polynomials

The roots of a polynomial expression of degree n, or equivalently the solutions of a polynomial equation, can always be written as algebraic expressions if n < 5 (see quadratic formula, cubic function, and quartic equation). Such a solution of an equation is called an algebraic solution. But the Abel-Ruffini theorem states that algebraic solutions do not exist for all such equations (just for some of them) if n

By convention, letters at the beginning of the alphabet (e.g.

) are typically used to represent constants, and those toward the end of the alphabet (e.g.

) are used to represent variables.[2] They are usually written in italics.[3]

By convention, terms with the highest power (exponent), are written on the left, for example,

is written to the left of

. When a coefficient is one, it is usually omitted (e.g.

Algebraic vs. other mathematical expressions

The table below summarizes how algebraic expressions compare with several other types of mathematical expressions.