This article is about the geometric figure. For the headquarters of the United States Department of Defense, see The Pentagon. For other uses, see Pentagon (disambiguation).

In geometry, a pentagon (from the Greek πέντε pente and γωνία gonia, meaning five and angle[1]) is any five-sided polygon or 5-gon. The sum of the internal angles in a simple pentagon is 540°.

A regular pentagon has Schläfli symbol {5} and interior angles are 108°.

A regular pentagon has five lines of reflectional symmetry, and rotational symmetry of order 5 (through 72°, 144°, 216° and 288°). The diagonals of a convex regular pentagon are in the golden ratio to its sides. Its height (distance from one side to the opposite vertex) and width (distance between two farthest separated points, which equals the diagonal length) are given by

where R is the radius of the circumcircle.

A pentagram or pentangle is a regular star pentagon. Its Schläfli symbol is {5/2}. Its sides form the diagonals of a regular convex pentagon – in this arrangement the sides of the two pentagons are in the golden ratio.

When a regular pentagon is inscribed in a circle with radius R, its edge length t is given by the expression

and its area is

since the area of the circumscribed circle is

the regular pentagon fills approximately 0.7568 of its circumscribed circle.

Derivation of the area formula

The area of any regular polygon is:

where P is the perimeter of the polygon, and r is the inradius (equivalently the apothem). Substituting the regular pentagon's values for P and r gives the formula

with side length t.

Chords from the circumscribed circle to the vertices

Like every regular convex polygon, the regular convex pentagon has a circumscribed circle. For a regular pentagon with successive vertices A, B, C, D, E, if P is any point on the circumcircle between points B and C, then PA + PD = PB + PC + PE.

Construction of a regular pentagon 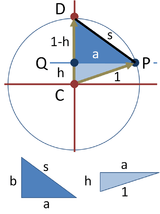 One method to construct a regular pentagon in a given circle is described by Richmond[2] and further discussed in Cromwell's "Polyhedra."[3]

The top panel shows the construction used in Richmond's method to create the side of the inscribed pentagon. The circle defining the pentagon has unit radius. Its center is located at point C and a midpoint M is marked halfway along its radius. This point is joined to the periphery vertically above the center at point D. Angle CMD is bisected, and the bisector intersects the vertical axis at point Q. A horizontal line through Q intersects the circle at point P, and chord PD is the required side of the inscribed pentagon.

To determine the length of this side, the two right triangles DCM and QCM are depicted below the circle. Using Pythagoras' theorem and two sides, the hypotenuse of the larger triangle is found as

. Side h of the smaller triangle then is found using the half-angle formula:

where cosine and sine of ϕ are known from the larger triangle. The result is:

With this side known, attention turns to the lower diagram to find the side s of the regular pentagon. First, side a of the right-hand triangle is found using Pythagoras' theorem again:

Then s is found using Pythagoras' theorem and the left-hand triangle as:

The side s is therefore:

a well-established result.[4] Consequently, this construction of the pentagon is valid.

The Carlyle circle was invented as a geometric method to find the roots of a quadratic equation.[5] This methodology leads to a procedure for constructing a regular pentagon. The steps are as follows:[6]

Steps 6–8 are equivalent to the following version, shown in the animation:

6a. Construct point F as the midpoint of O and W.

8a. Construct the other two vertices using the compass and the length of the vertex found in step 7a.

Using trigonometry and the Pythagorean Theorem

Using trigonometry and the Pythagorean Theorem to construct a regular pentagon.

(using double and half angle formulas)

Side length is given

The regular pentagon according to the golden ratio, dividing a line segment by exterior division

Pentagon at a given side length

Euclid's method for pentagon at a given circle, using of the golden triangle, animation

A regular pentagon is constructible using a compass and straightedge, either by inscribing one in a given circle or constructing one on a given edge. This process was described by Euclid in his Elements circa 300 BC.[7][8]

Simply using a protractor (not a classical construction)

After forming a regular convex pentagon, if one joins the non-adjacent corners (drawing the diagonals of the pentagon), one obtains a pentagram, with a smaller regular pentagon in the center. Or if one extends the sides until the non-adjacent sides meet, one obtains a larger pentagram. The accuracy of this method depends on the accuracy of the protractor used to measure the angles.

Overhand knot of a paper strip

Symmetries of a regular pentagon. Vertices are colored by their symmetry positions. Blue mirror lines are drawn through vertices and edges. Gyration orders are given in the center.

The regular pentagon has Dih5 symmetry, order 10. Since 5 is a prime number there is one subgroup with dihedral symmetry: Dih1, and 2 cyclic group symmetries: Z5, and Z1.

These 4 symmetries can be seen in 4 distinct symmetries on the pentagon. John Conway labels these by a letter and group order.[9] Full symmetry of the regular form is r10 and no symmetry is labeled a1. The dihedral symmetries are divided depending on whether they pass through vertices (d for diagonal) or edges (p for perpendiculars), and i when reflection lines path through both edges and vertices. Cyclic symmetries in the middle column are labeled as g for their central gyration orders. 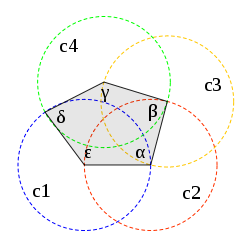 An equilateral pentagon is a polygon with five sides of equal length. However, its five internal angles can take a range of sets of values, thus permitting it to form a family of pentagons. In contrast, the regular pentagon is unique, because it is equilateral and moreover it is equiangular (its five angles are equal).

The equilateral pentagon is very similar to the shape commonly used as a symbol for a house. It is also the shape of the home plate in baseball.

The K5 complete graph is often drawn as a regular pentagon with all 10 edges connected. This graph also represents an orthographic projection of the 5 vertices and 10 edges of the 5-cell. The rectified 5-cell, with vertices at the mid-edges of the 5-cell is projected inside a pentagon. 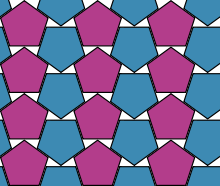 The best known packing of equal-sized regular pentagons on a plane is a double lattice structure which covers 92.131% of the plane.

A regular pentagon cannot appear in any tiling. First, to prove a pentagon cannot form a regular tiling (one in which all faces are congruent, thus requiring that all the polygons be pentagons), observe that 360° / 108° = 3 1⁄3 (where 108° Is the interior angle), which is not a whole number; hence there exists no integer number of pentagons sharing a single vertex and leaving no gaps between them. More difficult is proving a pentagon cannot be in any edge-to-edge tiling made by regular polygons:

There are no combinations of regular polygons with 4 or more meeting at a vertex that contain a pentagon. For combinations with 3, if 3 polygons meet at a vertex and one has an odd number of sides, the other 2 must be congruent. The reason for this is that the polygons that touch the edges of the pentagon must alternate around the pentagon, which is impossible because of the pentagon's odd number of sides. For the pentagon, this results in a polygon whose angles are all (360 − 108) / 2 = 126°. To find the number of sides this polygon has, the result is 360 / (180 − 126) = 6 2⁄3, which is not a whole number. Therefore, a pentagon cannot appear in any tiling made by regular polygons.

There are 15 classes of pentagons that can monohedrally tile the plane. None of the pentagons have any symmetry in general, although some have special cases with mirror symmetry.