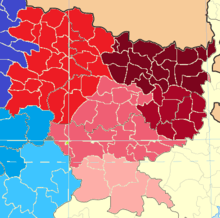 Bihari is the western group of Eastern Indo-Aryan languages, spoken in Bihar and neighboring states in India. Angika, Bajjika, Bhojpuri, Magahi, and Maithili are spoken in Nepal as well. The Angika, Bajjika, Bhojpuri, Magahi and Maithili speaking population form more than 21% of Nepalese population. Despite the large number of speakers of these languages, they have not been constitutionally recognised in India, except Maithili, which gained constitutional status via the 92nd amendment to the Constitution of India, of 2003 (gaining assent in 2004).[2] Even in Bihar, Hindi is the language used for educational and official matters.[3] These languages were legally absorbed under the overarching label Hindi in the 1961 Census. Such state and national politics are creating conditions for language endangerments.[4] After independence Hindi was given the sole official status through the Bihar Official Language Act, 1950.[5] Hindi was displaced as the sole official language of Bihar in 1981, when Urdu was accorded the status of the second official language. In this struggle between Hindi and Urdu, the claims of the three large native languages of the region – Angika, Bhojpuri and Magahi, were ignored.

The number of speakers of Bihari languages is difficult to indicate because of unreliable sources. In the urban region most educated speakers of the language name Hindi as their language because this is what they use in formal contexts and believe it to be the appropriate response because of unawareness. The educated and the urban population of the region return Hindi as the generic name for their language.[6]