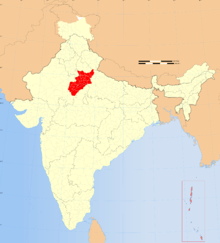 Brij Bhasha is spoken by people in the nebulously defined region of Vraja Bhoomi, which was a political state in the era of the Mahabharata wars. According to ancient Hindu texts such as the Bhagavata Purana, the kingdom of King Kamsa is described as spreading through the Brij (also known as Vrija or Vraja), where the incarnation of Krishna was born and spent his childhood days. This region lies in the Agra-Mathura-Aligarh area, and stretches as far as the environs of Delhi. In modern India, this area lies mostly in northwestern Uttar Pradesh, the eastern extremities of Rajasthan i.e. Bharatpur & Dholpur and the southern extremities of Haryana. Northern regions of Madhya Pradesh like Morena are also included.[4] Today Braj Bhoomi can be seen as a cultural-geographical entity rather than a proper state. It is the vernacular of the region and boasts a rich culture and literature by famous poets like Surdas, Bhai Gurdas and Amir Khusro. Brij Bhasha is very close to Avadhi, spoken in neighbouring Avadh region.

Much of the Hindi literature was developed in Braj in the medieval period. However, today Khariboli dialect has taken its place as the predominant standard dialect of Hindi.

In modern India, Braj Bhasha exists as an unofficial dialect spoken colloquially by natives of the region of Braj Bhoomi, with great cultural and religious significance. Much of Hindi poetry, especially that of 'Bhakti' or devotional poetry is in this language. Some devotional poems for Krishna are also composed in Braj Bhasha. The pioneering Hindi poet Aamir Khusro, also spoke and composed poetry in this language. Famous Braj Bhasha folk songs or poems include Chhaap Tilak Sab Chheeni by Amir Khusro, and the popular devotional song, Main Naahin Maakhan Khaayo by Surdas. Braj Bhasha is also the main language of Hindustani classical music compositions. Braj Bhasha is not to be confused with Brajabuli, an artificial literary language developed by Bengali medieval poets under the influence of Maithili love poems of Radha and Krishna by the poet Vidyapati. Rabindranath Tagore wrote his first substantial poems titled Bhanusimha Thakurer Padabali in Brajabuli under the pseudonym Bhānusiṃha ("Sun Lion") at age sixteen

Braj Bhasha is mainly a rural tongue currently, predominant in the nebulous Braj region centred on Mathura & Agra in Uttar Pradesh and Bharatpur & Dholpur in Rajasthan. It is the predominant language in the central stretch of the Ganges-Yamuna Doab in the following districts:

It stretches across the Ganges into the non-Doabi districts of Badaun and Bareilly and goes up to the foothills of Nainital at Udham Singh Nagar in Uttarakhand.

Besides Uttar Pradesh, it is spoken in the bordering areas of Rajasthan, mainly in the following districts:

as well as parts of Karauli, from where onwards it merges into Rajasthani languages.

It is also spoken in the areas of Uttar Pradesh East of Uttar Pradesh, mainly in Mathura district and eastern areas of Palwal and Noida districts. in Madhya Pradesh it is spoken in the districts of Bhind, Morena, Gwalior, and Shivpuri.[4] It is spoken in several villages of Mathura, specially in Vrindavan, Madhuvan, Kaman, Kosi Kalan, Baldeo, and all other villages belongs to Braj Area with Bajna, Surir, Bhidauni,

Most Braj Bhasha literature is of a mystical nature, related to the spiritual union of people with God, because almost all of the Braj Bhasha poets were considered God-realised saints and their words are thus considered as directly emanating from a divine source. Much of the traditional Northern Indian literature shares this trait. All traditional Punjabi literature is similarly written by saints and is of a metaphysical and philosophical nature.

Another peculiar feature of Northern Indian literature is that the literature is mostly written from a female point of view, even by male poets. This is because the saints were in a state of transcendental, spiritual love, where they were metaphorically women reuniting with their beloved. (In its inversion of the conventional genders of worshipper and worshippee, Maulana Da’ud's Chandayan departs from this tradition.)

Important works in Braj Bhasha are: