Billund (Danish pronunciation: [ˈb̥ilɔnˀ]) is a small town in Jutland, Denmark, most notable as the home of the Lego Group head office. A typical company town, it is also known for its theme park, Legoland, and for Billund Airport which is the second largest airport in Denmark. The airport opened in 1964 and was built by the Lego Group, but is now run independently.[1]

With a population of 6,194 (1 January 2014),[2] Billund is the second largest town in Billund Municipality, Region of Southern Denmark, following the municipal seat of Grindsted.

On the outskirts of the town there is a Lego factory, which, as of 2005, manufactured 90% of the company's products. Adjacent to the company's headquarters is the first Legoland theme park, which opened in 1968 and is called Legoland Billund.[1]

In addition to the Lego Group, Sun Air of Scandinavia has its head office in Billund.[3][4]

In 1880, the town's first windmill was built on the road between Vejle and Varde. In 1895, the mill burned to the ground but was rebuilt in 1897, this time in the style of Dutch windmills. That same year, a railway was built from Vejle to Billund, and the route was later extended to Grindsted in 1914.

In 1916, Ole Kirk Christiansen, who later founded Lego, bought a Billund furniture company that was founded in 1895. He invested in the town, creating a new dairy and the Skjoldbjerg church a few miles south of town. In 1930, Kirk Christiansen began producing utility items such as ironing boards, stepladders and miniature toys. His first toys were created from scraps from the production of his other goods but his true toy production started in 1932. In 1934, the toy factory was named "Lego."

In the late 1930s Billund experienced growth due to the factories and began to build waterworks, a gymnasium, and the town hall, though the local power station was closed and relocated.

During the Nazi occupation in World War II, the old Lego Factory was destroyed by fire in 1942, but a new one was immediately erected. In 1946, the railway track from Grindsted was extended to the Lego factory. Plastic Lego Bricks were first released from the factory in 1949.

The 1950s brought a recession to Billund with the closing of the railroad. In response to the growing poverty, the Billund Housing Association was founded and created affordable housing as well as a retirement home. Lego created a large park north of town with a playground, outdoor scene, toboggan hill and a man-made lake in 1959. In 1962 the Billund Airport was inaugurated, first as the Lego Group's private airport, and was later opened for other uses. Legoland opened in 1968, and Billund again began to experience growth.

As of 2012 the town had 6,146 residents. In the beginning of the 1930s Billund was still a small village with only 300 residents. In the 1950s the village reached 500 residents and after this time that number increased rapidly. After only 20 years, in 1970 this number quadrupled to 2,065 residents. Population growth exploded because of Lego's rapid expansion in the mid-1960s.

The town's demographics are characterized by many families with children; approximately 27.3% of the households in the town consist of couples with children. This is somewhat above the average for the region. The residents in the town mostly live in family houses. 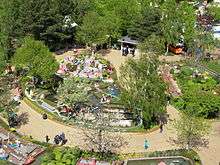 Billund is a popular destination for tourists, especially families with children. The town is home to the theme park Legoland, which was opened in 1968, and since 2009 has also been the home of Lalandia Billund, a waterpark and activity center.

With Billund airport, it is easy to get to the city, and besides the attractions in Billund, a lot of families also come to the area to visit the Givskud Zoo, Kongernes Jelling, and the Vandel Museum. In the area there are hotels, hostels, and a camping site.

A new Lego House will open in late 2017. It will be 23 metres tall and is a hands-on experience centre in the town centre.