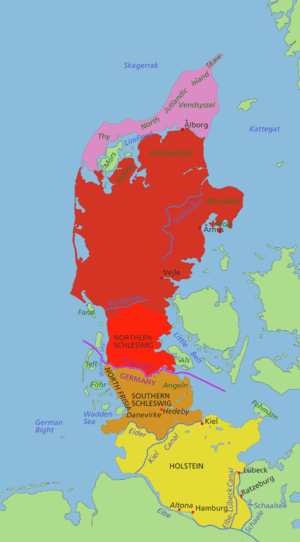 Jutland (/ˈdʒʌtlənd/; Danish: Jylland [ˈjylanˀ]; German: Jütland [ˈjyːtlant]), also known as the Cimbric or Cimbrian Peninsula (Latin: Cimbricus Chersonesus; Danish: Den Kimbriske Halvø; German: Kimbrische Halbinsel), is a peninsula of Northern Europe that forms the continental portion of Denmark and the northern portion of Germany. The names are derived from the Jutes and the Cimbri, respectively. Jutland's terrain is relatively flat, with open lands, heaths, plains and peat bogs in the west and a more elevated and slightly hilly terrain in the east. 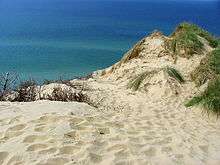 Jutland is a peninsula bounded by the North Sea to the west, the Skagerrak to the north, the Kattegat and Baltic Sea to the east and Germany to the south. Geographically and historically, Jutland comprises the regions of South Jutland, West Jutland, East Jutland (including Mols) and North Jutland (including Himmerland, Vendsyssel and Thy). There are several historical subdivisions and regional names, some of which are still occasionally encountered today. They include Nørrejyllland, Sydvestjylland, Nordvestjylland and Slesvig. Politically, Jutland currently comprises the three contemporary Danish Administrative Regions of North Denmark Region, Central Denmark Region and the Region of Southern Denmark, along with portions of the German state of Schleswig-Holstein.

Historically, Jutland was regulated by the Law Code of Jutland (Jyske Lov). This civic code covered the Jutland Peninsula from the area north of the River Eider to Funen as well as the North Jutlandic Island and other smaller islands.

The northernmost part of Jutland is separated from the mainland by the Limfjord, a narrow stretch of water which bisects the peninsula from coast to coast following a flood in 1825.[3] This area is called the North Jutlandic Island, Vendsyssel-Thy (after its districts) or simply Jutland north of the Limfjord; it is only partly co-terminous with the North Jutland region.

The islands of Læsø, Anholt and Samsø in Kattegat and Als at the rim of the Baltic Sea South are administratively and historically tied to Jutland although the latter two are also regarded as traditional districts of their own. Inhabitants of Als would agree to be South Jutlanders, but not necessarily Jutlanders.

The Danish Wadden Sea Islands and the German North Frisian Islands stretch along the southwest coast of Jutland in the German Bight.

Military stratagem in the Maneuver against the Romans by Cimbri and Teutons circa 100 B.C.

Jutland has historically been one of the three lands of Denmark, the other two being Scania and Zealand. Before that, according to Ptolemy, Jutland or the Cimbric Chersonese was the home of Teutons, Cimbri and Charudes.

Many Angles, Saxons and Jutes migrated from Continental Europe to Great Britain starting in c. 450 AD. The Angles themselves gave their name to the new emerging kingdoms called England (i.e., "Angle-land"). This is thought by some to be related to the invasion of Europe by the Huns from Asia.

Saxons and Frisii migrated to the region in the early part of the Christian era. To protect themselves from invasion by the Christian Frankish emperors, the Danes built the Danevirke, a wall stretching across South Jutland from the North Sea to the Baltic Sea, beginning in the 8th century.

The pagan Saxons inhabited the southernmost part of the peninsula at the Baltic Sea until the Saxon Wars in 772-804 AD in the Nordic Iron Age, when Charlemagne violently subdued them and forced them to be Christianised. Old Saxony was politically absorbed into the Carolingian Empire and Abodrites (or Obotrites), a group of Wendish Slavs who pledged allegiance to Charlemagne and who had for the most part converted to Christianity, was moved into the area to populate it. Old Saxony was later on referred to as Holstein.

To speed transit between the Baltic and the North Sea, canals have been built across the peninsula, notably the Eider Canal in the late 18th century and the Kiel Canal, completed in 1895 and still in use.

During the First World War, the Battle of Jutland in the North Sea west of Jutland was one of the largest naval battles in history. In this pitched battle, the British Royal Navy engaged the Imperial German Navy leading to heavy casualties and losses of ships on both sides. The British fleet sustained greater losses, but remained in control of the North Sea, so in strategic terms, most historians regard Jutland either as a British victory or as indecisive.[4]

The distinctive Jutish (or Jutlandic) dialects differ substantially from standard Danish, especially West Jutlandic and South Jutlandic. Dialect usage, although in decline, is better preserved in Jutland than in eastern Denmark, and Jutlander speech remains a stereotype among many Copenhageners and eastern Danes. 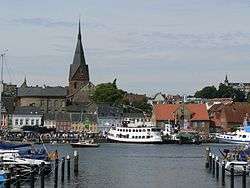 Flensburg has the largest Danish minority of any city in Germany.

The largest cities in the Danish section of Jutland are as follows:

Administratively, Danish Jutland comprises three of Denmark's five regions, namely the Region Nordjylland, Region Midtjylland and the western half of Region of Southern Denmark, which includes Funen. The five administrative regions came into effect on 1 January 2007, following a structural reform.[5] 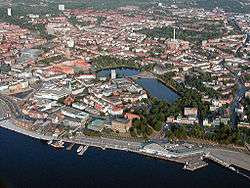 Kiel is the largest city on the German side of the Jutland Peninsula.

The southern third of the Jutland peninsula is made up of the German Bundesland of Schleswig-Holstein. Schleswig-Holstein has two parts: the former duchies of Schleswig (Danish fief) and Holstein (German fief), both of which have passed back and forth between Danish and German rulers several times. The last adjustment of the Danish–German border followed the Schleswig Plebiscites in 1920 and resulted in Denmark's regaining Northern Schleswig (Danish: Nordslesvig or more commonly today: Sønderjylland).

The historical southern border of Jutland is the River Eider, which is also the border between the former duchies of Schleswig and Holstein, as well as the historical border between the Danish and German realms from c. 800 to 1864. Although most of Schleswig-Holstein is geographically part of the Jutland peninsula, most German residents there would not identify themselves with Jutland or even as "Jutlanders", but rather with North Germany (German: Norddeutschland) and Schleswig-Holstein, considering themselves Northern Germans (German: Norddeutsche) and Schleswig-Holsteiner.

The medieval Code of Jutland applied for Schleswig until 1900 when it was replaced by the Prussian Civil Code. Some rarely used clauses of the Jutlandic Code still apply north of the Eider, but not south of the Eider.

The largest cities in the German part of Jutland or the Jutland Peninsula are Hamburg, Kiel, Lübeck, Flensburg and Neumünster.