Vejle (Danish pronunciation: [ˈʋɑɪ̯lə]) is a town in Denmark, in the southeast of the Jutland Peninsula at the head of Vejle Fjord, where the Vejle River and Grejs River and their valleys converge. It is the site of the councils of Vejle Municipality (kommune) and the Region of Southern Denmark. The city itself has a population of 54,862 (as of 1 January 2016),[1] making it the ninth largest city in Denmark. Vejle Municipality has a population of 111,743 (as of 2016).[1] The city is part of the Triangle Region, which includes the neighbouring cities of Kolding and Fredericia.

Vejle is most known for its forested hills, fjord, harbour, shopping, pedestrian mall, and iconic windmill. 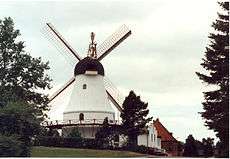 The word "Vejle" derives from the Old Danish word wæthel, meaning "ford" or "wading place" due to its location at a busy crossing over Vejle River. During Viking times, the wetlands around Vejle had to be crossed at the Ravning Bridge, a nearly half-mile wooden boardwalk. The first recorded mention of the town is from 1256, and the first known merchant town privileges were issued by King Valdemar III in 1327.

Archaeological digs near St. Nicolai Church in downtown Vejle have shown that there were residences in the area as far back as 1100. The king's castle, Castrum Wæthel, was located where Vejle Transit Centre is today.

During the Middle Ages, Vejle was important as a market town, and developed along those lines up to the mid-17th century, trading with cities such as Lübeck and Flensburg, in what is now Germany.

In the late 17th and early 18th centuries, Vejle's population was diminished as a consequence of plague and war. In 1796, though, Vejle was made the seat of the newly founded Vejle County, and the town expanded throughout the 19th century, benefiting from improvements such as a new harbour on the fjord, a railroad station, and modern utilities.

From the mid-19th century into the 20th century, Vejle developed from a provincial market town into a busy industrial centre, eventually becoming known as the "Manchester of Denmark" for its many cotton mills.[2]

Downtown Vejle was built on an island of glacial till in Vejle River remaining from a hill formed during the last ice age.[3]

For a country where the highest natural elevation is only about 170 m (558 ft) above sea level, Vejle is known for the forested hills that rise to the north and south of the town and fjord.

The two valleys that converge at Vejle are both unique in Denmark: Vejle River Valley (Vejle Ådal) is the longest tunnel valley in Denmark, and the Grejs Valley (Grejsdalen) is the largest ravine in Denmark.

Both empty into Vejle Fjord, which connects Vejle by water through the Little Belt strait to the Baltic Sea, and through the Kattegat and Skagerrak straits to the Atlantic Ocean. 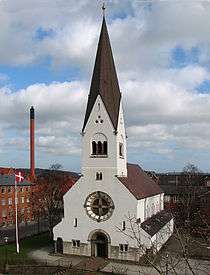 Many of Vejle's neighbourhoods began as separate towns or villages that merged with the city as it grew. Søndermarken, Nørremarken, and Grejsdalen, however, were all founded as extensions of the city onto the surrounding hillsides.

Vejle is the cultural and economic centre of Vejle Municipality and, as part of the unofficial Triangle Area (Trekantområde), is rich in industry, business, and the service sector. Historically speaking, industry has been very important for the city's development, while today more weight is placed on business and service, as well as high-tech firms. 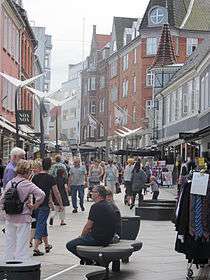 During the Industrial Revolution, Vejle was known as the "Manchester of Denmark"[4] due to its extensive textile mills. The local rivers provided water power to mills, including the extensive facilities of De Danske Bomuldsspinderier (The Danish Cotton Mills). In the first half of the 20th century, Vejle was something of a behemoth within the Danish textile industry, with some 25% of the city's workers employed in the industry.[4] Despite the decline in the industry in Denmark, the last cotton mill in Vejle remained open until 1993. Today, many of the old mill buildings are used for art studios, office space, and, more recently, apartments.

Later on, newer industries took root in Vejle. The city is home to one of the largest chewing gum factories in the world, producing Stimorol brand chewing gum.

The Tulip slaughterhouses were also an important employer in the city. Today, Tulip has closed its factory at the harbour, but still maintains production in northern Vejle.

Today, Vejle's economy is shifting out of the industrial sector and into the high-tech sector, with a number of software companies operating out of the city.

Vejle is known regionally as a vibrant shopping town with a wide and varied offering of both chain and specialty shops, primarily located along the city's central pedestrian mall. Recently, in an effort to maintain its position as a premiere shopping destination, the town has invested in several public works projects to improve the city's appearance, including lengthening the pedestrian mall, developing new public art and architecture, and uncovering and beautifying Grejs River, which until recently ran in a culvert underneath downtown. 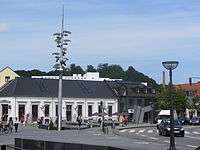 Nørretorv square at the northern end of the pedestrian mall

Ever since Social Democrat Christian Jacobsen became Vejle's first elected mayor in 1919, the town has been a stronghold for the Social Democrats and trade unions. The longest serving Social Democratic mayor was Willy Sørensen, a union leader who joined the city council in 1937 and held the mayor's post for 31 years, from 1946 until his death in 1978.[2] 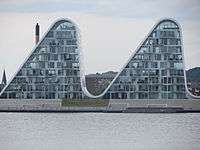 Historically speaking, Vejle's development has been guided by the city's central location in the country and its location on Vejle Fjord. Vejle's pedestrian mall today runs along the same course as some of the earliest paths through town[6] – glass panels set into Torvegade allow pedestrians to see the historical market road a few meters under the current street surface.

Vejle Station, also known as Vejle Transit Centre (Vejle Trafikcenter), provides 9 city bus lines to various neighbourhoods, as well as national and international coach and train services. Vejle Station first opened in 1868,[8] and is today a central station in the Danish train network. However, the station is currently the subject of political debate, due to a desire on the part of some politicians to reduce train travel time between Odense and Århus to one hour.[9] This may mean that a second bridge will be built over Vejle Fjord, bypassing Vejle Station. 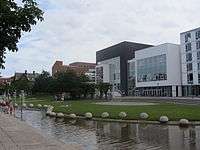 Vejle Harbour, in its current location, was inaugurated in 1827.[2][10] In the years following World War II, it grew to become the second largest port in Denmark after the Port of Copenhagen. Up until 1932, the steamboats Hvidbjerg (named after a local seaside community) and Jeppe Jensen (named after the harbour's founder) plied the waters between Vejle Harbour and Munkebjerg, Tirsbæk, Ulbækhus, and Fakkegrav.[11] The harbour is currently profitable, although there are plans to convert the northern section of the harbour into a park and residential area, which would reconnect the town with the fjord. The fjord is also the site of the modern wave-shaped apartment complex known as The Wave (Bølgen).[12] 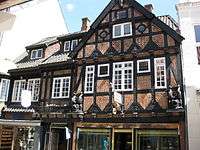 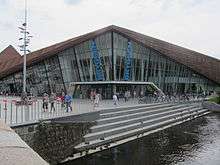 A central point of Vejle's environmental policy since 1985 has been the sorting of garbage into non-compostable and compostable waste, which is then composted in the city dump. To this end, residents must place all household trash into either black or green bags.[13]

Vejle Municipality has also begun a range of nature restoration projects. The most ambitious of these has been the restoration of the Kongens Kær wetlands around the Vejle River just outside the city limits. The city has also undertaken a project to establish two new public beaches for swimming, Albuen and Tirsbæk Strand.[14]

Vejle is home to the headquarters of University College Lillebælt, which is a merger of several educational institutions in East Jutland and Funen.[15]

Adult and professional education is available in Vejle through the Region of Southern Denmark, the Folkeuniversitet (Adult Education Centre), the Idrætshøjskole (Athletics Professional College), and Skolen for Gastronomi, Musik & Design (School for Gastronomy, Music, and Design).

On the primary level, Vejle has 11 regular primary schools (folkeskoler), 2 independent schools (friskoler), and 5 private schools (privatskoler) – one secular, one Protestant, one Catholic, one Islamic and one Waldorf-Steiner method school – as well as 2 schools for special needs students. Unique to Vejle is a special program for athletically talented students starting in late primary school and continuing through Vejle Handelsskole.

Crowd at a Vejle Boldklub game at Vejle Stadium

The city's traditional football (football) club, Vejle Boldklub (Vejle Football Club), has won the Danish Superliga Championships five times and the Danish Cup six times. Vejle Boldklub has trained many talented football players, among others one of Danish football history's few international stars: Allan Simonsen, who in 1977 became the first Danish player to win the European Footballer of the Year award. Today, Vejle Boldklub is in a ramping-up period, with the goal of bringing the club back to the top of Danish football. To this end, new Vejle Stadium was opened in spring 2008.

Vejle's largest indoor sports facilities are mostly housed in the DGI-Huset recreational centre in western Vejle. In the past, the facility has housed several high-profile events, including the European Women's Handball Championship and the Danish Open in badminton.

Former Swiss cycling star Tony Rominger was born in Vejle, and cycling star Bjarne Riis has a house in Vejle. Denmark's answer to the Tour de France, Danmark Rundt, includes a stretch through Vejle which is known as the hardest stage in the race, including a loop that requires the riders to climb the hillsides of Vejle several times. The race's winner is usually determined in the Vejle stage. 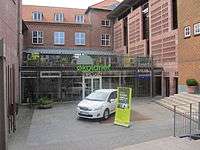 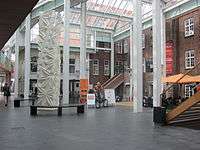 In the early and mid-20th century, Vejle had several popular cultural destinations such as Trædballehus in the western part of town and the Munkebjerg Casino south of the fjord.

Trædballehus, an inn and music venue, which burned down in 1954, got its big breakthrough in the mid-1930s when it was featured on Danish National Radio in connection with the opening of the old Little Belt Bridge. 1933 Hotel Munkebjerg boasted Europe's longest wooden escalator, carrying guests from the fjord-side beach up to the hilltop casino. Munkebjerg still exists as a hotel, casino and conference centre.

Vejle Mill, located on top of the cliff at Søndermarken, is a well-known landmark because of its visibility, and is often used as a symbol of the city.

The Old Jail House in Vejle, which is connected to the Town Hall, was rebuilt in 1984 and received a prize for beautification.

Development of new architecture, art and alternative town spaces throughout the 1990s has made the city an attraction. Vejle was the first city in Denmark, which had its own official architecture policy to set high standards for the urban development.

Vejle's oldest extant building, St. Nicolai Church, was built in the mid-13th century. On display in the church is the Haraldskær bog woman, a body from the Iron Age that was preserved with its skin intact in a local peat bog. Another feature of the church are 23 spherical indentations on the north transept – legend says these are imprints of the skulls of executed robbers from the woods that surround Vejle.

Among the city's cultural institutions is the renovated and expanded Vejle Museum of Art. The museum features the Wörzner collection with several COBRA works as well as works by Rembrandt. Today, Vejle Town Museum is located in the renovated Spinning Mill.

The Socialists' former stronghold in Vejle, The Building, is today placed under glass in a new shopping center, Mary's, and houses restaurants, cafés and two venues for e.g. jazz concerts. Økolariet is a free edutainment center for both children and adults, focusing on technology, ecology, recycling, etc.

Vejle is situated close to several Jutland attractions such as the original Legoland and the Viking Age royal capital of Jelling. Jelling's archaeological artifacts are considered a UNESCO World Heritage Site, and include two 10th century rune stones and two burial mounds, as well as a new exhibition centre. 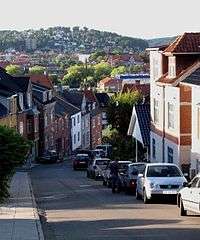 View of Vejle from Kiddesvej 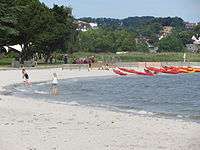 Vejle is twinned with the following cities: