Bishop's College in Colombo, Sri Lanka, is a girls' school which was founded by the Anglican Church of Ceylon in February 1875.

Bishop's College is a private fee-paying Anglican girls' school in Sri Lanka with about 2500 students at all grades from kindergarten to Grade 14. It is located at 15 Boyd Place, Colombo 3, Sri Lanka. The current principal is Sharmila Gunatilleke.

Bishop's College started in 1857 as one of the earliest mission schools of the Church of England in Ceylon, and it was first known as Bishopsgate School. The Bishop of Colombo, the Rt. Rev. James Chapman (1845–1862), and his wife Frances were instrumental in setting up the school.[1] Frances Chapman had set her heart on setting up a school for Christian girls with funds collected while on furlough in England. In 1857 she established a school in their own residence in Mutwal called Bishopsgate, with the 20 pupils she desired. The principal was a Mrs Long, who had served earlier at the Church Missionary School in Nallur, Jaffna.[2] However, in May 1859, Frances Chapman returned to England due to ill health, Mrs Long died in 1861 and the school had to be temporarily closed.[3] No reference to its reopening is available in the Diocesan Archives.[4] 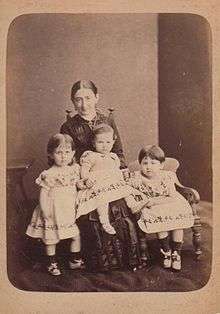 Bishop's College dates its beginning to 1875, when the school with 13 pupils was established at Fairfield House in Darley Road, under the same name - Bishopsgate School. Fairfield House is the present site of Link Holdings Ltd. Even today the word "Bishopsgate" stands engraved at the entrance to the building. The first principal to come out was Georgiana Down, who married Harry Drew, the son of Joseph Drew and music director at the nearby S. Thomas' College. Among the first girls enrolled were Minnie Von Possner, Hilda Obeysekera, Dorah Aserappah and Caroline Peiris. The first boys to enter the kindergarten were James and Donald Obeysekera and Leslie de Saram. Monthly expenses in running the school were about Rs. 300/- which included rent, salaries, and the hire of a piano. The income in fees in the first month totalled Rs. 302/50! In 1882 the school had twenty-one pupils, four of them in the school boarding. But the income was not sufficient to make ends meet. Even with the sale of the furniture, the debts could not be settled. Mrs. Drew resigned in April 1882, and with her departure the school had to be closed again.[5] Mrs. Drew returned to England with her husband and four children.[6]

In 1887, three sisters from St Margaret's Convent in East Grinstead, England, came to Ceylon on missionary work. Their Society of Saint Margaret was a sorority founded by John Mason Neale in 1855, which had now expanded to overseas mission. After a short location at Green Path, they established their convent in Polwatte, Kollupitiya.[7]

One of them, Sister Joanna Mary, was asked to help in the running of the school. Principals and teachers who came to Ceylon to fulfill the goals of Christian mission often had to leave due to ill health, the rigours of the tropical climate or personal reasons.[8] The answer seemed to be with the Sisters of St Margaret, and Sister Angela was the first sister to be principal of Bishopsgate School. The school was to be an institution to promote educational advancement, and also a finishing school for the daughters of Christian families. Subjects taught directed them to the Cambridge local examinations: French, drawing, singing, and piano playing were also on the curriculum.[9]

In 1890, the then Bishop of Colombo, Reginald Copleston, purchased the Maradatin Cinnamon Gardens bordering on Boyd Place, Colpetty. The school moved from Darley Road to these premises in 1892 and was renamed Bishop's College. Although the Sisters of St Margaret had by now for some years been associated with the running of the school, it was now with this shift that the school was passed into their care. Proximity to St Margaret's Convent at Polwatte was of great significance. For an unbroken period of sixty years from 1895 to 1955 these sisters guided the students of Bishop's College: not only in their mental development, but in the levels of charity, community spirit and public service, and upholding of the school motto "Non Sibi Sed Omnibus" (Not for Self, but for All).

A close bond was established between Bishop's College and St Margaret's Convent, Polwatte, which remains up to now.[11] The sisters are revered guests at all school functions; Bishop's College participates in all their special occasions and upholds the motto they gave the school by helping to the convent in fund-raising at their annual fair and in many other ways.

The number of students when the school moved to Boyd Place, was 70. As early as 1896 an association of past pupils, known then as the Bishop's College Association, was set up. As Bishop's College entered the 20th century the school chapel was dedicated to St Agnes, the Roman virgin and martyr of the 4th century.[12]

The school faced Boyd Place on the south, a property known as Arncliffe on the east, a building known as Edgecote on the west, and a government reservation adjoining the Beira Lake on the north. The property on which the school was located was held in trust by the bishop of the Diocese of Colombo with a board of three members. As the numbers on the school increased, additional staff had to be recruited and accommodation organised. The adjoining building, Edgecote, was rented out to house the kindergarten. Buildings within the premises were expanded. In due course the school built its own Kindergarten block and Edgecote was given up in 1929. Elscourt, a magnificent building on Turret Road, opposite the Victoria Park, at one time the site of the Colombo Orient Club, was gifted to the school by a loyal past pupil, Maude Peiris, mother of Harold Peiris.[13][14]

After much deliberation, and with the donor's approval, it was decided not to open a unit of the school at Elscourt as it was considered too far from the building at Boyd Place. Elscourt was sold and with funds realised. Arncliffe, the building adjoining the school with two road frontages - Boyd Place and General's Lake Road - was purchased. It was renamed Peiris House as a tribute to the generosity of Maude Peiris. With World War II entering the Asian zone, Bishop's College evacuated to "Fernhill" in Bahirawakanda, Kandy, with 37 students. Since the building could not house all the classrooms, Kandy Girls' High School generously shared their building. Those students who were left behind in Colombo were joined by those of Ladies College who had also not evacuated to form "Lake School" in the Bishop's College premises. Some of the buildings were taken over by the military, so the space was limited. In 1943, the danger from the war removed, the two branches of Bishop's College were reunited at Boyd Place. The number on the roll at the re-establishment was 100.

With the end of the war, the country was moving towards independence, and Bishop's College had in 1943 introduced Sinhala and Tamil as the media of instruction in the kindergarten, while they were being taught as a subject. Although the school had been established as a Christian missionary school, the Sisters of St Margaret had, as early as 1909, adopted a pluralist approach to religion. Of the 114 students at that time, 22 were non-Christian. In 1938 a Buddhist student was appointed head prefect.

In 1955 the sisters, due to non-availability of personnel, gave up guiding the school. The school thereafter had its policy determined by a board of governors with the Bishop of Colombo as chairman. L. Y. Pode was appointed principal. In 1959 Bishop's College had the first Ceylonese principal, A. C. B. (Amabel) Jayasuriya, and with her came a new identity to the school.[15] With a focus on national culture, she introduced the practice that the students of other faiths should commence their day with their own religious observance, as the Christians did, and have their own societies and celebrate their own festivals. She had a school song composed in Sinhala and set to oriental music. A Hewisi Band was trained to complement the Western Band. The activities of societies were in Sinhala, and in Tamil as the Tamil stream came up the school were on par with the English which had been a long-established tradition.

In 1959 Geoffrey Bawa and Ulrik Plesner were engaged to design a new three-storey classroom block for the school.[16] The classrooms are located on the first and second floors with an open ground level, which is used as a covered activity and play area. The design is influenced by Scandinavian modernism with its "white cubic architecture" "sharped edged prismatic forms and brise soleil facades".[17] The interior of the classroom block is protected by perforated external wall panels which are supported on a concrete portal frame and inserted between the exposed beam-ends to give an impression of extreme lightness and delicacy. A heavy horizontal eaves beam is hung out to protect the facade and to mask the pitched roof, thus accentuating the horizontality and modernist credentials of the design. When the building was nearing completion Bawa commissioned Lydia Duchini, an Italian sculptress, to create a sculpture of the bishop. The life sized gold leaf encrusted statue stands at the foot of the main staircase.

The school opted to be a free-levying private school and had to find its own financial resources. The school passed on after 19 years to the principalship of Gwen Dias Abeysinghe, a past pupil. She added to the standards inherited, and Bishop's College came to produce theatrical performances; including The Gondoliers with a combined cast of girls from Bishop's and boys from the brother school at S. Thomas' College.

The Past Pupils' Association, which has grown in strength, has always been supportive and assisted with money raising for buildings. Since the school hall, impressive in its day, was totally inadequate for present needs, the PPA was anxious to gift an auditorium to their Alma Mater, and with land leased out from the Government, laid the foundation in 1985. With the rising costs in construction, the project was spread out longer than envisaged but was commissioned for use in 1994. The school, the PPA and Parent-Teacher Association all contributed to make this a reality.

This last decade has seen the school steered by Lindley Jayasuriya, earlier vice-principal. Hemamali Bibile was the principal from 2003-2011. Sharmila Gunatilleke is the current principal.

Bishop's College has divided the students into 4 houses. Named,

Henley house was placed first for the 17th consecutive year by the end of the 2015 sportsmeet.