Bishops Sutton or Bishop's Sutton is a village and civil parish 1 mile (1.6 km) east of the market town of Alresford in the City of Winchester district of Hampshire, England. According to the 2001 census it had a population of 419. 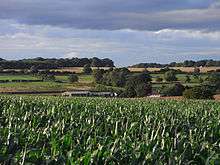 View from road and footpath towards the North Downs

The parish of Bishops Sutton, containing 3,739 acres (15.13 km2) of land and 9 acres (36,000 m2) of land covered with water, is of an irregular shape, the central part, in which the village stands, being in the comparatively low ground (250 ft. above sea level) by the head-waters of the River Alre, while a long strip runs north-east between the parishes of Bighton and Ropley, rising to a height of 500 ft (150 m) along the downs to the north. South of the river the boundary extends to the high ground above Cheriton Wood and Bramdean Common. Watercress cultivation and as at present crop agriculture with pasture formed a major occupation, the soil being quite chalky but southern areas being arable. The advent of the Mid Hants Railway also known as the Watercress Line meant fresh watercress from beds by the calciferous, high, clear River Alre could be delivered to the metropolis of London and elsewhere. Bypassed by an addition to the A31, the historic road bears medium to low traffic into Alresford and two side roads, Church Lane and School Lane with that road form the main developed area. 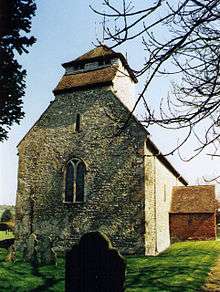 At the time of the Domesday Survey the place was recorded as Sudtone i.e. Bishop's Sutton (which included Ropley), and Bramdean). The hundred of Bishop's Sutton was known as the hundred of 'Esselei', and comprised those places as well as West Tisted. The villages is by or on (depending on which track was preferred) the Pilgrims' Way between Winchester and Canterbury, which can still be walked via the North Downs Way.

A gazetteer of 1868 links Bishops Sutton with a residence of the Bishop of Winchester, saying it is now a malthouse[2] however one of 1872 says the Bishops had a palace here and the only suggested remains are its kennel.[3] The 1871 population was 537 in 114 houses.[3]

Esselei was a small hundred and in the eighteenth century, a law in England amended the hundreds which were of decreasing importance: from that date all manors within the immediate area were recorded in the Hundred of Bishops Sutton by law.

Bishops Sutton in elections every four years elects one representative to Hampshire County Council, this is currently:

Bishops Sutton elects one representatives to the City of Winchester District Council, currently:

The parish council has 6 elected councillors and a website with local news and events.[22]

Much of the population is retired[1] with a range of events and activities organised by the parish council to transcend the generations thus the village managed to win the Hampshire and Isle of Wight village of the year award in 2011, among the major draws are a summer fete, a charity race quasi-betting night at the large public house, The Ship Inn, an active village hall with links to businesses and a pond/meadow open for local recreation.[23][24] The average commute of working is 24.36 kilometres (15.14 mi).[1]