Hinton Ampner House is a stately home with gardens within the civil parish of Bramdean and Hinton Ampner, near Alresford, Hampshire, England. 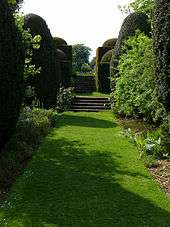 The house and garden are owned by the National Trust and are open to the public.[1][2]

The garden was created by Ralph Stawell Dutton (1898–1985), the 8th and last Baron Sherborne, starting in 1930, making this a modern 20th-century garden.[3] The property is now more noted for its garden than the house. Previously, the parkland came directly up to the house, which was designed to be a hunting lodge. An earlier Tudor house stood close to the current site, before the current house was built.

The current house was built in 1790 but remodelled extensively in 1867. It was remodelled again in the Neo-Georgian style by Trenwith Wills and Lord Gerald Wellesley for Ralph Dutton between 1936 and 1939 to his vision of what it would have been like had it been built on its current scale in 1790 – a Georgian country house.[4] It was badly damaged by fire in 1960, and restored again much as it had appeared in 1936.

The house contains a number of fine paintings. There is a set of paintings of the four seasons by Jacob de Wit, depicting cherubs painted in a three-dimensional monochrome style.

Ralph Dutton, with no direct heirs, gave the estate to the National Trust, on his death in 1985.

The old Tudor house attained notoriety, in the 18th century, after it became uninhabitable due to a severe haunting. The tenant, one Mary Ricketts, wrote extensively on the subject for her children's benefit, after having been literally forced to flee the property with a few remaining retainers (many had already left in terror).[5] The house was pulled down in 1793, after its replacement had been built about 50 meters (160 feet) to the south.