Bladder cancer is any of several types of cancer arising from the epithelial lining (i.e., the urothelium) of the urinary bladder. Rarely the bladder is involved by non-epithelial cancers, such as lymphoma or sarcoma, but these are not ordinarily included in the colloquial term "bladder cancer." It is a disease in which abnormal cells multiply without control in the bladder.[1]

The most common type of bladder cancer recapitulates the normal histology of the urothelium and is known as transitional cell carcinoma or more properly urothelial cell carcinoma. Five-year survival rates in the United States are around 77%.[2] 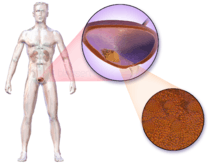 Other possible symptoms include pain during urination, frequent urination, or feeling the need to urinate without being able to do so. These signs and symptoms are not specific to bladder cancer, and are also caused by non-cancerous conditions, including prostate infections, over-active bladder and cystitis. There are many other causes of hematuria, such as bladder or ureteric stones, infection, kidney disease, kidney cancers and vascular malformations.

Tobacco smoking is the main known contributor to urinary bladder cancer; in most populations, smoking is associated with over half of bladder cancer cases in men and one-third of cases among women,[5] however these proportions have reduced over recent years since there are less smokers in Europe and North America.[6] There is an almost linear relationship between smoking duration (in years), pack years and bladder cancer risk. A risk plateau at smoking about 15 cigarettes a day can be observed (meaning that those who smoke 15 cigarettes a day are approximately at the same risk as those smoking 30 cigarettes a day). Quitting smoking reduces the risk, however former smokers will most likely always be at a higher risk of bladder cancer compared to never smokers.[6] Passive smoking has not been proven to be involved.[7]

Thirty percent of bladder tumors probably result from occupational exposure in the workplace to carcinogens such as benzidine. 2-Naphthylamine, which is found in cigarette smoke, has also been shown to increase bladder cancer risk. Occupations at risk are bus drivers, rubber workers, motor mechanics, leather (including shoe) workers, blacksmiths, machine setters, and mechanics.[8] Hairdressers are thought to be at risk as well because of their frequent exposure to permanent hair dyes.

In addition to these major risk factors there are also numerous other modifiable factors that are less strongly (i.e. 10-20% risk increase) associated with bladder cancer, for example obesity.[9] Although these could be considered as minor effects, risk reduction in the general population could still be achieved by reducing the prevalence of a number of smaller risk factor together.[10]

It has been suggested that mutations at HRAS, KRAS2, RB1, and FGFR3 may be associated in some cases.[11]

A 2008 study commissioned by the World Health Organisation concluded that "specific fruit and vegetables may act to reduce the risk of bladder cancer."[12] Fruit and yellow-orange vegetables, particularly carrots and those containing selenium,[13] are probably associated with a moderately reduced risk of bladder cancer. Citrus fruits and cruciferous vegetables were also identified as having a possibly protective effect. However an analysis of 47,909 men in the Health Professionals Follow-Up Study showed little correlation between cancer reduction and high consumption of fruits and vegetables overall, or yellow or green leafy vegetables specifically, compared to the statistically significant reduction among those men who consumed large amounts of cruciferous vegetables.

In a 10-year study involving almost 49,000 men, researchers found that men who drank at least 1,44 L of water (around 6 cups) per day had a significantly reduced incidence of bladder cancer when compared with men who drank less. It was also found that: "the risk of bladder cancer decreased by 7% for every 240 mL of fluid added".[14] The authors proposed that bladder cancer might partly be caused by the bladder directly contacting carcinogens that are excreted in urine, although this has not yet been confirmed in other studies.[12] 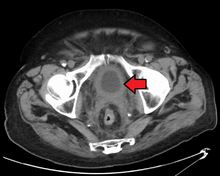 Bladder wall thickening due to cancer 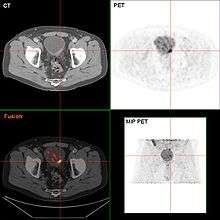 Bladder tumor in FDG PET due to the high physiological FDG-concentration in the bladder, furosemide was supplied together with 200 MBq FDG. The uptake cranial to the lesion is a physiological uptake in the colon.

Cystoscopy, a procedure in which a flexible tube bearing a camera and various instruments is introduced into the bladder through the urethra allows diagnosis and by biopsying suspicious lesions.

The gold standard for diagnosing bladder cancer is biopsy obtained during cystoscopy. Sometimes it is an incidental finding during cystoscopy.[15] Urine cytology can be obtained in voided urine or at the time of the cystoscopy ("bladder washing"). Cytology is not very sensitive (a negative result cannot reliably exclude bladder cancer).[16] There are newer non-invasive urine bound markers available as aids in the diagnosis of bladder cancer, including human complement factor H-related protein, high-molecular-weight carcinoembryonic antigen, and nuclear matrix protein 22 (NMP22).[17] NMP22 is also available as a prescription home test. Other non-invasive urine based tests include the CertNDx Bladder Cancer Assay, which combines FGFR3 mutation detection with protein and DNA methylation markers to detect cancers across stage and grade, UroVysion, and Cxbladder.

However, visual detection in any form listed above, is not sufficient for establishing pathological classification, cell type or the stage of the present tumor. A so-called cold cup biopsy during an ordinary cystoscopy (rigid or flexible) will not be sufficient for pathological staging either. Hence, a visual detection needs to be followed by transurethral surgery. The procedure is called transurethral resection of bladder tumor (TURBT). Further, bimanual examination should be carried out before and after the TURBT to assess whether there is a palpable mass or if the tumour is fixed ("tethered") to the pelvic wall. The pathological classification obtained by the TURBT-procedure, is of fundamental importance for making the appropriate choice of ensuing treatment and/or follow-up routines.[22] 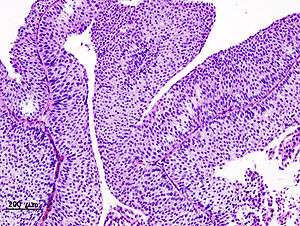 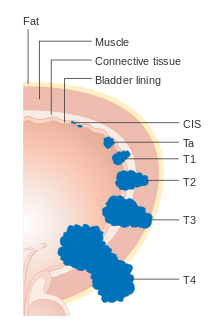 The TNM staging system for bladder cancer is as follows:[23]

Numerical The stages above can be integrated into a numerical staging (with Roman numerals) as follows:[25]

As of 2010 there is insufficient evidence to determine if screening for bladder cancer in people without symptoms is effective or not.[26]

In 2013 a preliminary, small study of 98 samples of urine, all from men—24 who had cancer, and 74 with bladder-related problems but no cancer yet used a gas chomotagraph to successfully examine the vapor from heated urine samples to identify cancer.[27] 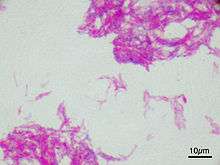 Attenuated strain of M. bovis used in the treatment of bladder cancer

The treatment of bladder cancer depends on how deep the tumor invades into the bladder wall.

Superficial tumors (those not entering the muscle layer) can be "shaved off" using an electrocautery device attached to a cystoscope, which in that case is called a resectoscope. The procedure is called transurethral resection of bladder tumor—TURBT—and serves primarily for pathological staging. In case of non-muscle invasive bladder cancer the TURBT is in itself the treatment, but in case of muscle invasive cancer, the procedure is insufficient for final treatment.[22]

Immunotherapy by intravesicular delivery of Bacillus Calmette–Guérin (BCG) is also used to treat and prevent the recurrence of superficial tumors.[28] BCG is a vaccine against tuberculosis that is prepared from attenuated (weakened) live bovine tuberculosis bacillus, Mycobacterium bovis, that has lost its virulence in humans. BCG immunotherapy is effective in up to 2/3 of the cases at this stage, and in randomized trials has been shown to be superior to standard chemotherapy.[29] The mechanism by which BCG prevents recurrence is unknown, but the presence of bacteria in the bladder may trigger a localized immune reaction which clears residual cancer cells.[30]

Instillations of chemotherapy, such as valrubicin (Valstar) into the bladder, can also be used to treat BCG-refractory CIS disease when cystectomy is not an option.[31]

Patients whose tumors recurred after treatment with BCG are more difficult to treat.[32] Many physicians recommend cystectomy for these patients. This recommendation is in accordance with the official guidelines of the European Association of Urologists (EAU)[33] and the American Urological Association (AUA)[34] However, many patients refuse to undergo this life changing operation, and prefer to try novel conservative treatment options before opting to this last radical resort. Device assisted chemotherapy is one such group of novel technologies used to treat superficial bladder cancer.[35] These technologies use different mechanisms to facilitate the absorption and action of a chemotherapy drug instilled directly into the bladder. Another technology - electromotive drug administration (EMDA) - uses an electric current to enhance drug absorption after surgical removal of the tumor.[36][37] Another technology, thermotherapy, uses radio-frequency energy to directly heat the bladder wall, which together with chemotherapy shows a synergistic effect, enhancing each other's capacity to kill tumor cells. This technology was studied by different investigators.[38][39][40][41]

Untreated, superficial tumors may gradually begin to infiltrate the muscular wall of the bladder. Tumors that infiltrate the bladder require more radical surgery where part or all of the bladder is removed (a cystectomy) and the urinary stream is diverted into an isolated bowel loop (called an ileal conduit or Urostomy). In some cases, skilled surgeons can create a substitute bladder (a neobladder) from a segment of intestinal tissue, but this largely depends upon patient preference, age of patient, renal function, and the site of the disease.

A combination of radiation and chemotherapy can also be used to treat invasive disease. It has not yet been determined how the effectiveness of this form of treatment compares to that of radical ablative surgery.

For muscle invasive urothelial urinary bladder cancer there are a number of treatment options. Gold standard is radical cystectomy as mentioned. In males this usually includes also the removal of the prostate and in females; ovaries, uterus and parts of the vagina.

In order to address the problem of micrometastatic disease which in itself has implications on longtime survival, new treatment options are dearly needed. Micrometastatic dissemination is often not treatable with only major surgery and the concept of neoadjuvant chemotherapy has evolved. In this patients first receive chemotherapy in 3 or 4 cycles, and after that proceed to major surgery. In a number of meta-analyses of randomised prospective trials worldwide, the results have shown survival benefits between 5–8% with this therapy, in a follow up time of 5 years.[43][44][45][46]

In the United States, bladder cancer is the fourth most common type of cancer in men and the ninth most common cancer in women. More than 50,000 men and 16,000 women are diagnosed with bladder cancer each year. Smoking can only partially explain this higher incidence in men.[49] One other reason is that the androgen receptor, which is much more active in men than in women, plays a major part in the development of the cancer.[50]