A drummer starting at eleven years of age,[1] Crane began his career as a radio personality, first in New York and then Connecticut before moving to Los Angeles where he hosted the number-one rated morning show. In the early 1960s, he moved into acting. Crane is best known for his performance as Colonel Robert E. Hogan in the CBS sitcom Hogan's Heroes. The series aired from 1965 to 1971, and Crane received two Primetime Emmy Award nominations for his work on the series. After Hogan's Heroes ended, Crane's career declined. He became frustrated with the few roles he was being offered and began doing dinner theater. In 1975, he returned to television in the NBC series The Bob Crane Show. The series received poor ratings and was cancelled after 13 weeks. Afterwards, Crane returned to performing in dinner theaters and also appeared in occasional guest spots on television.

While on tour for his play Beginner's Luck in June 1978, Crane was found bludgeoned to death in his Scottsdale apartment, a murder that remains officially unsolved.

Crane was born in Waterbury, Connecticut, and spent his childhood and teenage years in Stamford.[2] He began playing drums and by junior high was organizing local drum and bugle parades with his neighborhood friends.[3] He later joined his high school's marching and jazz bands and the orchestra.[4] He played for the Connecticut and Norwalk Symphony Orchestras as part of their youth orchestra program.[5] He graduated from Stamford High School in 1946.[2] In 1948 Crane enlisted for two years in the Connecticut Army National Guard and was honorably discharged in 1950.[6]

In 1950, Crane began his broadcasting career at WLEA in Hornell, New York. He soon moved to WBIS in Bristol, Connecticut, and then WICC in Bridgeport, Connecticut, a 1,000-watt operation with a signal covering the northeastern portion of the New York metropolitan area. In 1956 he was hired by CBS Radio to host the morning show at its west coast flagship KNX in Los Angeles, partly to re-energize that station's ratings and partly to halt his erosion of suburban ratings at WCBS in New York City. In California he filled the broadcast with sly wit, drumming, and such guests as Marilyn Monroe, Frank Sinatra, and Bob Hope. His show quickly topped the morning ratings with adult listeners in the Los Angeles area, and Crane became "king of the Los Angeles Airwaves."[8]

Crane's acting ambitions led to guest-hosting for Johnny Carson on the daytime game show Who Do You Trust? and appearances on The Twilight Zone (uncredited), Channing, Alfred Hitchcock Presents, and General Electric Theater. After Carl Reiner appeared on his radio show, Crane persuaded him to book a guest appearance on The Dick Van Dyke Show.

After seeing Crane's performance on The Dick Van Dyke Show, Donna Reed offered him a guest shot on her program. After the success of that episode his character, Dr. David Kelsey, was incorporated into the story line and Crane became a regular cast member, beginning with the "Friends and Neighbors" episode.[9] Crane continued to work full-time at KNX during his stint on The Donna Reed Show, running back and forth from the KNX studio at Columbia Square to Columbia Studios. He left the show in December 1964.[1]

In 1965, Crane was offered the starring role in a television situation comedy about a German P.O.W. camp. Hogan's Heroes became a hit and finished in the top ten in its first year on the air. The distinctive military-style snare drum rhythm that introduces the show's theme song was played by Crane himself. The series lasted for six seasons, and Crane was nominated for an Emmy Award twice, in 1966 and 1967. In 1968 he became romantically involved with cast member Patricia Olson, who played Hilda under the stage name Sigrid Valdis. He divorced Anne in 1970, just prior to their 21st anniversary, and married Olson on the set of the show later that year.[10][11] Their son, Scotty, was born June 4, 1971,[12] and they later adopted a daughter, Ana Marie. The couple separated in 1977, but according to several family members, reconciled shortly before Crane's death.[11]

In 1968, Crane and series costars Werner Klemperer, Leon Askin, and John Banner appeared with Elke Sommer in a feature film, The Wicked Dreams of Paula Schultz, set in the divided city of Berlin during the Cold War. In 1969, Crane starred with Abby Dalton in a dinner theater production of Cactus Flower.

Crane frequently videotaped and photographed his own sexual escapades.[13] During the run of Hogan's Heroes, Richard Dawson introduced Crane to John Henry Carpenter, a regional sales manager for Sony Electronics who often helped famous clients with their video equipment.[14] The two men struck up a friendship and began going to bars together. Crane attracted women due to his celebrity status and introduced Carpenter as his manager. Later, they would videotape their sexual encounters.[15] While Crane's son Robert later insisted that all of the women were aware of the videotaping and consented to it, some, according to one source, had no idea that they had been filmed until informed by Scottsdale police after Crane's murder.[16] Carpenter later became national sales manager at Akai, and arranged his business trips to coincide with Crane's dinner theater touring schedule so that the two could continue seducing and videotaping women after Hogan's Heroes had run its course.[17]

Following the cancellation of Hogan's Heroes, Crane appeared in two Disney films: Superdad (1973), in the title role, and Gus (1976). In 1973, he purchased the rights to a comedy play called Beginner's Luck and began touring it, as its star and director, at the Showboat Dinner Theatre in St. Petersburg, Florida, the La Mirada Civic Theatre in California, the Windmill Dinner Theatre in Scottsdale, Arizona, and other dinner theaters around the country.[18]

Between theater engagements he guest-starred in a number of TV shows, including Police Woman, Gibbsville, Quincy, M.E., and The Love Boat. In 1975 Crane returned to TV with his own series, The Bob Crane Show on NBC, which was canceled after 13 episodes.

In early 1978 Crane taped a travel documentary in Hawaii, and recorded an appearance on the Canadian cooking show Celebrity Cooks. Neither aired in the U.S. following his death. His appearance on Celebrity Cooks did air in Canada in late 1978, and was recreated in the biopic film Auto Focus.[1] 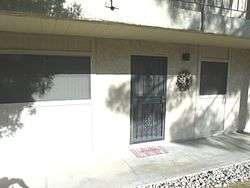 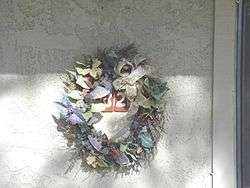 A funeral wreath on the door of apartment 132A.

Crane's and Valdis's gravestone, bearing the banner, "Hogan and Hilda, Together Forever"

In June 1978, Crane was living in the Winfield Place Apartments in Scottsdale during a run of Beginner's Luck at the Windmill Dinner Theatre. On the afternoon of June 29, Crane's co-star Victoria Ann Berry entered his apartment after he failed to show up for a lunch meeting and discovered his body.[19] Crane had been bludgeoned to death with a weapon that was never identified, though investigators believed it to be a camera tripod. An electrical cord had been tied around his neck.[20]

Crane's funeral, on July 5, 1978, was held at St. Paul the Apostle Catholic Church in Westwood. An estimated 200 family members and friends attended, including Patty Duke, John Astin, and Carroll O'Connor. Pallbearers included Hogan's Heroes producer Edward Feldman, co-stars Larry Hovis, Robert Clary, and Crane's son Robert. He was interred in Oakwood Memorial Park in Chatsworth, California.[21] Olson later had his remains relocated to Westwood Village Memorial Park in Westwood, and was buried beside him (under her stage name, Sigrid Valdis) after her death from lung cancer in 2007.[22]

The Scottsdale Police Department, like most its size, had no homicide division, and was ill-equipped to handle a high-profile murder investigation. The crime scene yielded few clues; there was no evidence of forced entry, and nothing of financial value was missing. Detectives examined Crane's extensive videotape collection, which led them to Carpenter, who had flown to Phoenix on June 25 to spend a few days with Crane. Carpenter's rental car was impounded and searched. Several blood smears were found that matched Crane's blood type; no one else known to have been in the car, including Carpenter, tested for that type. (DNA testing was not yet available.) With no other significant material evidence, the Maricopa County Attorney declined to file charges.[23]

In 1990, Scottsdale Detective Jim Raines—a former Phoenix homicide investigator[24]—reexamined the evidence from 1978 and persuaded the County Attorney to reopen the case.[25] Although DNA testing of the blood found in Carpenter's rental car was inconclusive, Raines discovered an evidence photograph of the car's interior that appeared to show a piece of brain tissue. The actual tissue samples recovered from the car had been lost, but an Arizona judge ruled that the new evidence was admissible.[25] In June 1992 Carpenter was arrested and charged with Crane's murder.[26][27]

At the 1994 trial, Crane's son Robert testified that in the weeks before his father's death, Crane had repeatedly expressed a desire to sever his friendship with Carpenter. He said Carpenter had become "a hanger-on" and "a nuisance to the point of being obnoxious".[28] "My dad expressed that he just didn't need Carpenter kind of hanging around him anymore," he said.[23] He testified that Crane had called Carpenter the night before the murder and ended their relationship.[29]

Carpenter's attorneys attacked the prosecution's case as circumstantial and inconclusive. They presented evidence, including witnesses from the restaurant where the two men had dined the evening prior to the murder, that Carpenter and Crane were still the best of friends. They noted that the murder weapon had never been identified or found; the prosecution's camera tripod theory was sheer speculation, they said, based solely on Carpenter's occupation. They disputed the claim that the newly discovered evidence photo showed brain tissue, and presented many examples of "sloppy work" by police, such as the mishandling and misplacing of evidence—including the crucial tissue sample itself.[24] They pointed out that Crane had been videotaped and photographed in compromising sexual positions with numerous women, implying that any one of them, fearing blackmail, might have been the killer.[30] Other potential suspects proposed by defense attorneys included angry husbands and boyfriends of the seduced women, and an actor who had sworn vengeance after a violent argument with Crane in Texas several months earlier.[23]

Carpenter was acquitted. He continued to maintain his innocence until his death four years later, in 1998.[31] After the trial, Robert Crane speculated publicly that Crane's widow, Patricia Olson, might have had a role in instigating the crime. "Nobody got a dime out of [the murder]," he said, "except for one person," alluding to Crane's will, which excluded him, his siblings, and his mother, and left the entire estate to Olson. He repeated his suspicions in a 2015 book.[32] Maricopa County District Attorney Rick Romley, who prosecuted the case, responded, "We never characterized Patty as a suspect." He added, "I am convinced John Carpenter murdered Bob Crane."[10] Officially, Crane's murder remains unsolved.[31]

In November 2016, Fox 10 Phoenix television reporter John Hook convinced the Maricopa County Attorney’s Office to retest the DNA evidence. DNA testing performed in November 2016 on the 1978 blood samples collected from Carpenter's rental car, using a more advanced technique than the one used in 1990, again failed to match Crane's DNA profile. Two sequences were identified, one from an unknown man, and the other too degraded to reach a conclusion.[33][34] This reexamination of the evidence is the subject of a new book written by Hook titled, Who Killed Bob Crane? to be released February 21, 2017. [35]

In June 2001 Scotty Crane launched the web site bobcrane.com. It included a paid section featuring photographs, outtakes from his father's sex films, and Crane's autopsy report that proved, he said, that his father did not have a penile implant as stated in Auto Focus.[16][39][40] The site has since been renamed "Bob Crane: The Official Web Site", and no longer includes a paywall or controversial material.[41]