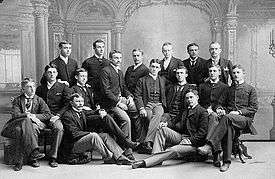 Members of the 1888 Delegation 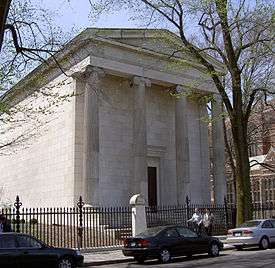 The Society of Book and Snake (incorporated as the Stone Trust Corporation)[1] is the fourth oldest secret society at Yale University and was the first society to induct women into its delegation. Book and Snake was founded at the Sheffield Scientific School in 1863 as a three-year society bearing the Greek letters Sigma Delta Chi. As other "Sheff" societies, it was once residential and maintained a separate residential "cloister" at 1 Hillhouse Ave, which was built in 1888 and deeded to Yale after the institution of the residential college system. Members who lived in the society residence, or "Cloister", become the Cloister Club.[2] Today, the building is the Yale University Provost's Office. A plaque honoring the society can be found on the first floor of the building. The Book and Snake emblem is a book surrounded by the ouroboros.

Like other landed Yale societies, Book and Snake owns its own meeting hall, or "tomb" at the corner of Grove St. and High St. As is tradition with the meeting places of Yale secret societies, the building is windowless and available only to the current members and alumni.

Architects of the Book & Snake Buildings

The Book and Snake Tomb stands at the corner of Grove St. and High St. in New Haven, CT, adjacent to the Yale Law School and the Beinecke Plaza. It was designed by Louis R. Metcalfe (1901), in Greek Ionic style. The front door is modeled after the Erechtheion Temple on the Acropolis in Athens. Passersby will notice wrought-iron snakes, or "caduceuses" adorning the iron fence surrounding the property. The white marble temple, startling in its Classical Greek verisimilitude, is deliberately situated with its back to the Yale campus; instead its orientation facing directly across the street to the massive Egyptian-revival gates of the Grove Street Cemetery, makes for an impressive display of ancient, mortuary-themed solemnity. The building stands approximately sixty feet long, forty-two feet wide and about forty feet high, including two stories and gable, the whole of Vermont marble, cut smooth. Four Ionic pillars, also of marble, shield the bronze doors. (Citation at ).

The former meeting place of Book and Snake was a residential hall of the Sheffield Scientific School known as the "Cloister". J. Edwards Ficken designed the building (1888). Today, the "Cloister" serves as the Yale University Provost's Office at 1 Hillhouse Ave. Citation and picture at and at .)