Bou Craa is the site of a deposit of 1.7 billion tons of phosphates. Mining began there in 1972.[1] During the Spanish colonization of the area (see Spanish Sahara) time, many early recruits of the nationalist movements Harakat Tahrir and Front Polisario were Sahrawi workers in the phosphate mines. The town became part of the Moroccan zone in the April 1976 partition resulting from the Madrid Accords.[1] It has remained in Moroccan hands, though mining was halted in 1976 as a result of Polisario Front guerilla attacks. The phosphates are transported to the coast by an automated conveyor belt, the longest such belt in the world, and during the Western Sahara War the Front Polisario vandalized and disabled this transportation system several times. These attacks gradually ceased after the town was enclosed in the early 1980s by the Moroccan Wall, keeping the town under Moroccan control. Mining resumed on a reduced scale in July 1982.[1]

Today the mine produces around 3 million tonnes, contributing 10% of Moroccan production.[2] 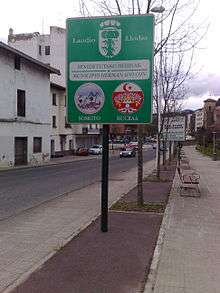 Sign in Llodio showing the coat of arms of its twin town Bou Craa (Bucraa). 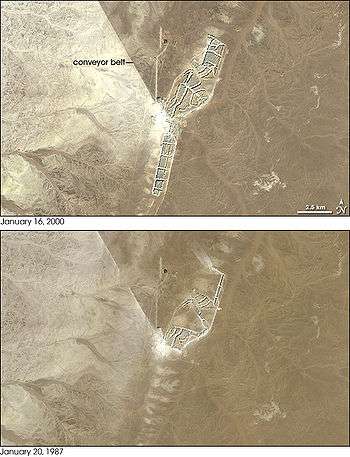 Landsat images of Bou Craa in 2000 and 1987. The straight line to the Northwest is the conveyor belt.