The Moroccan Wall of Western Sahara is an approximately 2,700 km (1,700 mi) long structure, mostly a sand wall (or "berm"), running through Western Sahara and the southeastern portion of Morocco. It separates[1] the Moroccan occupied, and controlled, areas (Southern Provinces) and the Polisario-controlled areas (Free Zone, nominally Sahrawi Arab Democratic Republic) that lies along its eastern and southern border.

According to maps from the United Nations Mission for the Referendum in Western Sahara (MINURSO)[2] or the UNHCR,[3] part of the wall extends several kilometres (a few miles) into internationally recognized Mauritanian territory.[4]

The fortifications lie in uninhabited or very sparsely inhabited territory. They consist of sand and stone walls or berms about 3 m (10 ft) in height, with bunkers, fences and landmines throughout. The barrier minebelt that runs along the structure is thought to be the longest continuous minefield in the world.[5] Military bases, artillery posts and airfields dot the Moroccan-controlled side of the wall at regular intervals, and radar masts and other electronic surveillance equipment scan the areas in front of it.

The following is one observer's description of the Berm:

Physically, the berm is a 2 m (6 ft 7 in) high wall (with a backing trench), which rides along a topographical high point/ridge/hill throughout the territory. Spaced out over every 5 km (3.1 mi) are a big, small and medium base, with approximately 35–40 troops at each observation post and groups of 10 soldiers spaced out over the distance as well. About 4 km (2 1⁄2 mi) behind each major post there is a rapid reaction post, which includes backing mobile forces (tanks, etc). A series of overlapping fixed and mobile radars are also positioned throughout the berm. The radars are estimated to have a range of between 60 and 80 km (37 and 50 mi) into the Polisario controlled territory, and are generally utilized to locate artillery fire onto detected Polisario forces. Information from the radar is processed by a forward-based commander, who contacts a rear-based artillery unit.[6]

In all, six lines of berms have been constructed.[7] The main ("external") line of fortifications extends for about 2,500 km (1,600 mi). It runs east from Guerguerat on the coast in the extreme south of Western Sahara near the Mauritanian town of Nouadhibou, closely parallelling the Mauritanian border for about 200 km (120 mi), before turning northwards beyond Techla. It then runs generally northeastward, leaving Guelta Zemmur, Smara, crossing again Mauritanian territory and reaching Hamza in Moroccan-held territory, before turning east and again closely following the Algerian border as it approaches Morocco. A section extends about 200 km (120 mi) into southeastern Morocco[8][9]

Significant lines of fortifications also lie deep within the Moroccan-controlled area.[10] Their exact number and location are a source of some confusion for overseas commentators.[11][12]

All major settlements, the capital El Aaiún, and the phosphate mine at Bou Craa lie far into the Moroccan-held side.

The fortifications were progressively built by Moroccan forces starting in 1981, and formally ending on 16 April 1987.[7] Its main function was to exclude the guerrilla fighters of the Polisario Front, who have sought Western Saharan independence since before Spain ended its colonial occupation in 1975, from the Moroccan-controlled part of the territory.

Effectively, after the completion of the wall, Morocco has controlled the bulk of Western Sahara territory that lies to the north and west of it, calling these the kingdom's "Southern Provinces". The Polisario-founded Sahrawi Arab Democratic Republic controls the mostly uninhabited "Free Zone", which comprises all areas to the east of the barrier. Units from the United Nations mission MINURSO separate the two sides, and enforce cease-fire regulations on their troops. 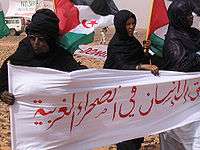 Sahrawi women hold a protest in Western Sahara on the eastern side of the wall.

In the summer of 2005, the Moroccan Army accelerated the expulsion (started in late 2004) of illegal immigrants detained in northern Morocco to the eastern side of the wall, into the Free Zone. The Polisario Front and the MINURSO rescued several dozen lost in the desert, who had run out of water. Others died of thirst.[13] By October, the Polisario had received 22 immigrants in Mehaires, 46 in Tifariti and 97 in Bir Lehlu. They were from African countries (Gambia, Cameroon, Nigeria, Ghana, etc.), except a group of 48 who were from Bangladesh.[14][15]

Western attention to the wall, and to the Moroccan annexation of the Western Sahara in general, has been minimal, apart from Spain. In Africa, the annexation of Western Sahara by Morocco has attracted somewhat more attention. Algeria supports the Polisario Front "in its long-running desert war to oppose Moroccan control of the disputed area".[16][17] The Organization of African Unity/African Union and United Nations have proposed negotiated solutions, though the African Union's stance on Western Sahara led to Morocco's exit from the organisation.

Since 2008, a demonstration called "The Thousand Column" is held annually in the desert against the barrier by international human rights activists and Sahrawi refugees. In the 2008 demonstration, more than 2,000 people (most of them Sahrawis and Spaniards, but also Algerians, Italians, and others) made a human chain demanding the demolition of the wall, the celebration of the self-determination referendum accorded by the UN and the parts in 1991, and the end of the Moroccan occupation of the territory.[18]

In the 2009 edition, a teenage Sahrawi refugee named Ibrahim Hussein Leibeit lost half of his right leg in a landmine explosion.[19][20] The incident happened when Ibrahim and dozens of young Sahrawis crossed the line into a minefield while aiming to throw stones to the other side of the wall.[21][22]

Construction of the wall 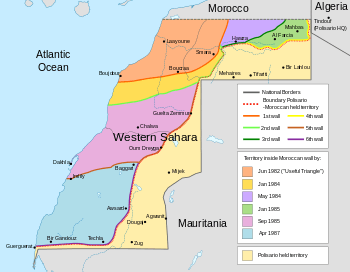 The wall was built in six stages, and the area behind the wall was expanded from a small area near Morocco in the north to most of the western and central part of the country gradually. The walls built were: