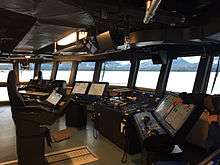 The interior of the bridge of the Research Vessel Sikuliaq, docked in Ketchikan, Alaska.

The bridge of a ship is the room or platform from which the ship can be commanded. When a ship is underway the bridge is manned by an OOW (officer of the watch) aided usually by an AB (able seaman) acting as lookout. During critical maneuvers the captain will be on the bridge supported, perhaps, by an OOW as an extra set of hands, an AB on the wheel and sometimes a pilot if required.

Wheelhouses are the small enclosed parts of a bridge that historically held the ship's wheel. Today, ship's bridges do not have a separate wheelhouse; the term wheelhouse or pilothouse is used nowadays to refer to the smaller bridges of small vessels, such as tugs. 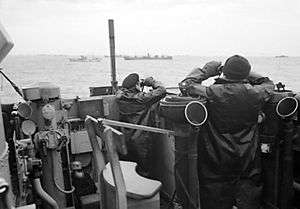 The compass platform of a British destroyer in the Battle of the Atlantic during the Second World War. Notice the binnacle in the prominent position centrally and the voice pipes for relaying commands. The armoured wheelhouse and the coxswain would be directly underneath. The Royal Navy favoured the open bridge for the unique tactical view it gave the Captain, long after other navies enclosed the bridge. 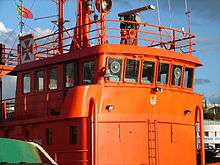 Bridge of the tugboat Leão dos Mares. An open compass platform, which still has the traditional binnacle, now also houses a radar antenna and sits above the enclosed wheel house. The circular devices in the windows are Kent screens. 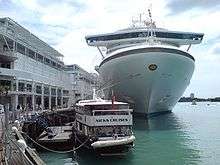 Traditionally, sailing ships were commanded from the quarterdeck, aft of the mainmast. With the arrival of paddle steamers, engineers required a platform from which they could inspect the paddle wheels and where the captain's view would not be obstructed by the paddle houses. A raised walkway, literally a bridge, connecting the paddle houses was therefore provided. When the screw propeller superseded the paddle wheel, the bridge was retained.

Traditionally, commands would be passed from the senior officer on the bridge to stations dispersed throughout the ship, where physical control of the ship was exercised, as technology did not exist for the remote control of steering or machinery. Helm orders would be passed to an enclosed wheel house, where the coxswain or helmsman operated the ship's wheel. Engine commands would be relayed to the engineer in the engine room by an engine order telegraph that displayed the captain's orders on a dial. The engineer would ensure that the correct combination of steam pressure and engine revolutions were applied. The bridge was often open to the elements, therefore a weatherproof pilot house could be provided, from which a pilot, who was traditionally the ship's navigating officer, could issue commands from shelter.

Iron, and later steel, ships also required a compass platform. This was usually a tower, where a magnetic compass could be sited far away as possible from the ferrous interference of the hulk of the ship. Depending upon the design and layout of a ship, all of these terms can be variously interchangeable. Many ships still have a flying bridge, a platform atop the pilot house, open to weather, containing a binnacle and voice tubes to allow the conning officer to direct the ship from a higher position during fair weather conditions.

Larger ships, particularly warships, often had a number of different bridges. A navigation bridge would be used for the actual conning of the ship. A separate admiral's bridge could be provided in flagships, where the admiral could exercise strategic control over his fleet without interfering with the Captain's tactical command of the vessel. In older warships, a heavily armored conning tower was often provided, where the vital command staff could be located under protection to ensure that the ship could be commanded under fire.

Modern advances in remote control equipment have seen progressive transfer of the actual control of the ship to the bridge. The wheel and throttles can be operated directly from the bridge, controlling often-unmanned machinery spaces. Aboard modern warships it is common that actual commanding is carried out on the bridge while weapon systems are controlled from a room usually deep inside the vessel. This also enables a redundant setup in which the vessel is still able to fight in case one of the command instances has been hit or destroyed.

On a commercial vessel, the bridge will contain the equipment necessary to safely navigate a vessel on passage. Such equipment will vary with ship type, but generally includes a GPS navigation device, a Navtex receiver, an ECDIS or chart system, one or more radars, a communications system (including distress calling equipment, engine (telegraph) controls, a wheel/autopilot system, a magnetic compass (for redundancy and cross check capability) and light/sound signalling devices.[1]

Some modern vessel designs include movable bridges, which may allow more cargo, or may permit passage under low bridges. HHI's Skybench design is intended for large containerships.[2]