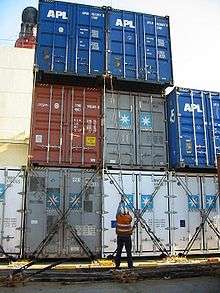 The deck department is responsible for safely receiving, discharging, and caring for cargo during a voyage. 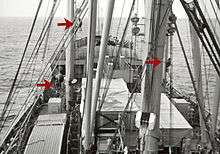 The ship's bosun, an able seaman (AB) day worker, and a watchstander AB are seen here working aloft aboard a U.S. freighter to maintain cargo Rigging.

The chief mate is the head of the deck department. This involves administrative tasks such as scheduling work, quality control, coordinating with other departments, and conflict resolution. The Chief Mate also compiles supply, overtime, and cost control records, and requisitions or purchases stores and equipment. Depending on the number of officers carried, he may or may not be a watch officer. If the ship carries a Second Mate and two Third Mates, he will be a dayworker, with a duty day from 0800 to 1700 ship's time. If only one Third Mate is carried, he will stand the 4 to 8 watch in addition to handling his executive duties.

The ship's other deck officers, generally a Second Mate and Third Mate, are also members of the Deck Department. Each watchstanding officer is responsible for the unlicensed crewmen on his watch.

In a four mate ship where the Chief Mate is a dayworker, the Second Mate will stand the 4 to 8 watch, because sunrise and sunset usually fall on that watch. In the days before satellite navigation systems, the Second Mate shot morning and evening star fixes to determine the ship's position. The Second Mate is also responsible for maintaining the ship's charts and navigational publications, the ship's gyrocompass, and all navigational gear. He also keeps the log extract for each voyage used by company management as a short form "howgozit" sheet, covering time at sea, time under pilotage, time in port, and types and tonnages of cargoes moved.

In the military, the deck department comprises sailors who perform a variety of functions depending on ship type and size.

Examples include maintenance and upkeep of the ship, handling of the ship's rigging and ground tackle, coordination of underway replenishment operations, conductance of minesweeping operations, maintenance and operation of the ship's boats, supervision of diving and salvage operations (including towing), and serving as shipboard seamanship specialists. Undesignated seamen, or those who have not selected a rating (e.g. job or vocation), are normally the most junior sailors on board and are usually sent to the Deck Department for their first assignment.