c-command (constituent command) is a relationship between the nodes of grammatical parse trees.[1] It is closely associated with the phrase structure grammars of the Chomskyan tradition (Government and Binding, Minimalist Program), and may not be valid or applicable to the tree structures of other theories of syntax, such as dependency grammars. The relation of c-command has served as the basis for many explorations and explanations of phenomena of syntax. It has been taken to be the basic configurational relation underlying binding, and has played a central role in the analysis of diverse syntactic mechanisms, such as parasitic gaps and the scope of quantifiers.

Informally speaking, a node in a tree c-commands its sibling node(s) and all of its siblings' descendants; however, a node without siblings c-commands everything that its parent c-commands. 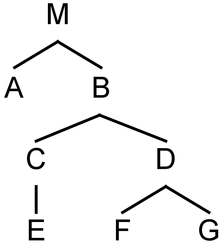 The definition of c-command is based partly on the relationship of dominance: Node N1 dominates node N2 if N1 is above N2 in the tree and one can trace a path from N1 to N2 moving only downwards in the tree (never upwards); that is, if N1 is a parent, grandparent, etc. of N2.

Based upon this definition of dominance, node A c-commands node B if and only if:

For example, according to this definition, in the tree at the right,

A number of variations of the c-command relationship have been proposed, a prominent one being m-command, which is used in defining the notion of government.

The term itself, i.e. c-command, was introduced by Tanya Reinhart in her 1976 dissertation, and is a shortened form of constituent command. Reinhart thanks Nick Clements for suggesting both the term and its abbreviation.[3] The concept Reinhart was developing was, however, not new to syntax. Similar configurational notions had been circulating for more than a decade. In 1963 Klima and Lees proposed a configurational relationship between nodes expressed as "in construction with", and Langacker proposed the notion of "command" in 1969.[4]

One application of the c-command relation is found in the study of binding, where the possible syntactic relationships between personal pronouns and their antecedents are studied. These relationships appear to be subject to certain restrictions; it was hypothesized that one such restriction is that the pronoun cannot appear in a position where it c-commands its antecedent. Consider the sentences:

The validity and importance of c-command for the theory of syntax is a debated issue.[5] In most cases, c-command correlates positively with precedence (linear order), that is, when node A c-commands node B, it is usually the case that node A also precedes node B. Furthermore, basic S(V)O (subject-verb-object) word order in English correlates positively with a hierarchy of syntactic functions, subjects outranking objects. Subjects typically precede objects in declarative sentences in English and related languages. These two insights suggest that theories of syntax that build on c-command have misconstrued the importance of precedence and/or the hierarchy of syntactic functions. What c-command is intended to address is arguably more accurately analyzed in terms of precedence and the syntactic functions. Further, the c-command concept was developed primarily with its ability to address syntactic phenomena of English, a language with relatively strict word order. When confronted with the much freer word order of many other languages, the insights provided by c-command are less compelling, since linear order becomes less important.